This past weekend I had the rare opportunity to play in a Legacy Grand Prix. The fact that this event took place across the pond in Strasbourg, France was no less than extraordinary. Through a twist of fortune. my company sent me on a business trip to the Frankfurt area with overlapping timing of the Grand Prix. This two hour trip was more than worth it.

Fortune was not with me during the main event, however, and I was swiftly eliminated. It turns out not playing Legacy for a year (and mulling to five twice in a round) is a bad idea.

But I did gain some invaluable experience on the finance side. While I claim to be no expert in arbitrage between the European and American MTG market, I would like to share some of the tidbits I picked up while I was overseas.

Legacy Is Alive… and Kicking

A full 1365 players attended this Legacy Grand Prix. While the size doesn’t set any records, the energy in the room was very high and it was obvious how much people enjoy this format. When I asked a friend at the GP if he would drop after a disappointing start his response was, “No. I want to play more Legacy.” True dedication.

This energy transcended to the dealer tables. All five dealers had their fair share of money cards on display. Black bordered Dual Lands, Power, cards like Lions Eye Diamond and foil Jace, the Mind Sculptors were all on display. If the foil Jace wasn’t 500 Euros, I may have made a bid for it. Too much for my blood. 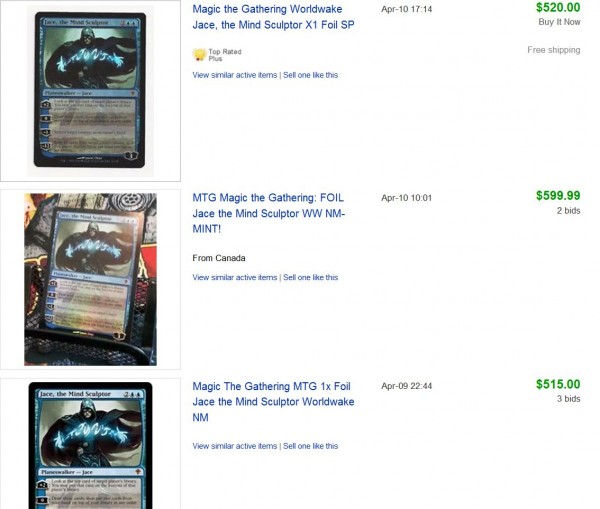 This brings me to my first key observation of the European market. In the United States, booster packs have an MSRP of $3.99. In the Eurozone, the MSRP is 4 euro. Thanks to a conversion rate of 1 euro = $1.31, this equates to a 31% higher price for the same booster pack. While a Standard booster box can be purchased for $90 in the US, those same boxes sell for 90 euros overseas.

This creates a forced price discrepancy in newer cards. In order for a retailer in Europe to sell every card in a new set, they need to open the same number of packs as an American retailer while paying about one-third greater to do so. As a result, a new card like Deathrite Shaman sells for about $12 in the US also sells for about the same in euros within Europe. Even a Standard card like Angel of Serenity was marked with a 12 euro price tag. 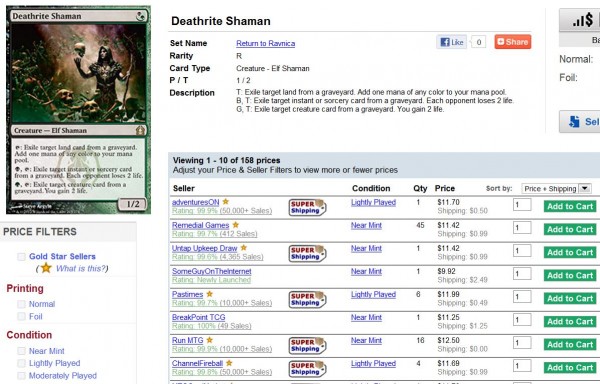 Going back to foil Jace – even though this is a Legacy card its recent printing has not yet overcome these price inconsistencies. Therefore, a $500 foil Jace will sell for 500 euro in the Eurozone.

There’s another factor which is perhaps driving up foil Jace’s price – the demand for foil eternal and casual staples in the European market. The cards that got the most attention in my binder this past weekend was my set of foil Abrupt Decays. This card, like Jace, has the double-whammy of being recently printed and Legacy playable. Not a single dealer had these for sale, and each one attempted to negotiate with me on price.

But what took me most by surprise was what happened next. One dealer asked me what my desired price was on the set of Foil Abrupt Decays and I had to do some quick math. I determined that $100 was fair for the set, I did a rough euro conversion, and I spat out “75 euros”. The dealer closed the binder and handed it back to me. 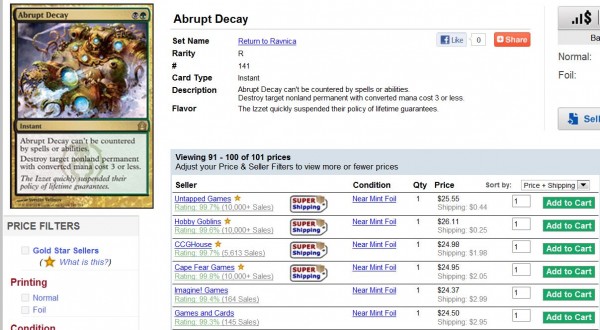 A player nearby heard my asking price and starting talking to me in French. I apologized for not being able to speak French, but I knew what he wanted – those Abrupt Decays. So much so, that he took 75 euros out of his wallet and tried to hand it to me right in front of the dealer booth!

The dealer was kind enough to instruct us (in French) to go outside and complete the transaction. Two minutes later and I unloaded my foil Abrupt Decays at a fair price. Now I need to purchase more because I think these will do well in the long term!

Many dealers had multiple, thick binders full of English and Foreign foils. I took a quick glance through one of these binders in the hopes I would find a bargain. No such luck. It seems sweet foils have the same dollar-to-euro impact as newer cards.

Not every card had this same problem. Surprisingly, many classic Legacy staples were priced comparably to the United States. For example, retailers were selling Underground Sea for around 110 euro. While this seems high for auction pricing, Star City Games is currently sold out of this Dual Land with a price of $159.99. The two are not very far off.

Vintage cards were in a similar boat. Unlimited Black Lotuses could be had for 800 euros, and even things like Mishras Workshops were priced comparably to the US, even after currency conversion. It seems that if a card has been on the market long enough, the price discrepancy slowly erodes over as cards are played, traded and bought/sold to reach ripe demand.

The only card I did pick up from a dealer this past weekend also fell into this category. I grabbed a MP German Lions Eye Diamond for 49 euro. While not spectacular, the recent jump in LED caused by Star City Games should mean this is the optimal time to make such an acquisition. I hope to bring this card to the US market and sell for it a small profit thanks to the rarity of German copies. Currently there is only one for sale on eBay, and I am confident I can beat this price and still profit.

I also understand that the Lions Eye Diamond I acquired was discounted due to its played condition. Most of the dealers were very concerned with this point. It seems many Europeans like to have their cards NM. Anything less is rather unacceptable. I asked one dealer how much they’d pay for a Vendilion Clique and they responded 20 euros. I felt this wasn’t bad, but then I recalled my copy was a little played. I asked his buy price on a played copy and he simply said “not interested”. Not even an offer was made!

Before leaving for this trip I decided not to sell out of Legacy at this event. Instead, I just trimmed down the collection so that I could maintain cards for two decks (should be three once I buy some cheap Tarmogoyfs after Modern Masters release).

This ended up being the right decision. Firstly, I was reminded of how amazing Legacy can be. The format has a strong, healthy following which suggests to me Wizards will likely continue some support for the format. Second, and more importantly, the buy prices of dealers in Europe are no better than the US when it comes to older staples such as Dual Lands. I would have carried with me the entire collection only to have found disappointing buy prices – and even worse on my played cards!

What will I plan for next time? Apparently I need to purchase more foil copies of newer Legacy staples. I was told that something like Aether Vial is hard to find in Europe, and I’d imagine set foils would demand quite the premium. Of course, foil Abrupt Decays are great for unloading in Europe as well.

While the arbitrage opportunity of a lifetime did not present itself, I still learned a good deal about how the European Magic market operates. And while I am far from expert, I hope to be able to apply this knowledge to help me grow as a MTG speculator in the future.

Due to my busy travel schedule, I will have to cancel Sigbits for this week. I will try to make up for this by providing double the Sigbits next week. Sorry for the inconvenience.