Wait, I paid how much for this Legendary Creature?? If you challenged me to tell you what the card does, or even what his power and toughness are, I would embarrassingly confess ignorance. But it doesn’t matter because of this:

This “Tim” lookalike has more than doubled in price over the past month or so. And many other Legendary creatures from Legends are following suit. Recently Star City Games has also bumped their prices on Legends Legends quite significantly, and the Quiet Speculation community has taken notice.

What does this all mean?

I’ve touched upon how Magic has grown in previous articles. The game is selling at record highs and tournament attendance is so great that event coordinators have to turn eager participants away.

From an MTG Finance perspective, the most apparent evidence for the rise in popularity of Magic lies in casual prices… like this one:

The two charts above don’t look very similar, even though the end result of a 2x price increase is the same. It seems everyone knows that Platinum Angel is a casual favorite and has been rising slowly over time as a result. On the other hand, Adun Oakenshield was a card I had never heard of until it became the number one “interest” on mtgstocks.com.

It feels like I am not alone in this regard. My conclusion is that these flavorful Legends Legends were an unknown entity to the vast majority of new players. Platinum Angel can be found in trade binders everywhere, but good luck finding an English copy of Adun Oakenshield or Rasputin Dreamweaver sitting in a trade binder. Cards from Legends are probably older than many new players.

Star City Games and ABU Games have both added energy into this chain reaction. Cards which once sold in eBay auctions for $20 are now buylisting at these major retailers for twice that. A quick glance at mtg.gg reveals how these two stores have left their competitors in the dust: 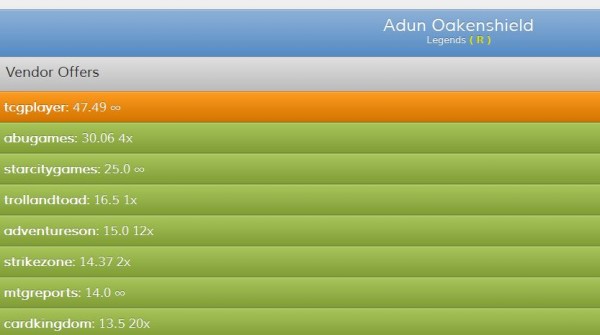 Naturally, the combination of mtgstocks.com, mtg.gg, and general speculation has caused these Legends Legends to skyrocket. Their growth hasn’t surpassed that of more well-known casual staples, so perhaps these jumps were long overdue. Or perhaps someone decided these shouldn’t be affordable cards any longer and triggered this hype.

No matter the cause, the question in the forefront of my mind is what to do with this “new age” of expensive Legends Legends.

The fundamental question underlying this debate is whether or not we should feel these price bumps are truly merited.

If we accept these prices as being merited, then perhaps we can draw a parallel between this phenomenon and the iPhone. Before the iPhone was invented, no one really knew they wanted such a device so badly. Once the right marketing scheme was devised and the product gained traction, everyone had to have an iPhone. Perhaps in a similar way, someone came up with a clever way of revealing to the MTG community how awesome Angus Mackenzie really is. People naturally wanted copies and the price now reflects the newfound demand.

If, on the other hand, we refuse to accept the legitimacy of these new prices, perhaps these parallel much better with Beanie Babies. Someone decided those stuffed animals were cute and awesome and desirable, and others blindly followed suit. The difference here is that once people owned hundreds of dollars in Beanie Babies, they realized the things weren’t really so cool after all. The hype fizzled as quickly as it built and prices plummeted.

Boiling it down we can determine how sustainable these new Legends prices are based on how much we believe in their entertainment value. After all, entertainment (and a little coolness) is what really helps drive the casual market. And it will be the casual market that keeps these prices afloat since speculators don’t want to hold a spiked card greedily and no tournament player ever wants to use these cards.

Personally, I am a believer. I absolutely love the flavor of Legends Legends. The artwork is amazing, the creature abilities are interesting, and the color combinations are valuable in EDH. Therefore, I think these prices will remain. Demand may calm down once this initial hype passes, but these are the kinds of cards that players like to play with over and over again. They’ll never rotate and they’ll never be reprinted (thank you reserved list).

With that said, I’d say if you can find copies near mtg.gg buy prices and you want to own copies for yourself, I would buy. I just purchased a Rasputin Dreamweaver, Angus Mackenzie, and Adun Oakenshield and I will be very torn on whether or not I should sell them. The speculator within me screams “take profits now” while the casual player says “enjoy these sweet cards”. I likely won’t decide until I hold the cards in my hand and try building an EDH deck with them.

After all, these are the cards that made Magic so special when I was a kid. Playing the best deck on the internet wasn’t a thing yet, and we all enjoyed playing the wackiest combos and most entertaining spells. Sometimes I lose sight of this through all my speculation and discussion of MTG Finance. These cards help me return to childhood again, and I believe the same will be true for other players as well. That’s why I think these new prices are not artificially inflated. People have been reminded these flavorful creatures exist. And they want to have fun playing Magic again.

13 thoughts on “Insider: The Legend of Legends Legends”