If you haven't heard the news, GP Las Vegas has already broken the record for largest Grand Prix (and, incidentally, Magic Tournament) ever through pre-registration alone. Obviously the location impacts the attendance and people just looking to crack packs of Modern Masters are certainly among those attending, but I'd like to believe that the awesome nature of the Modern Masters limited format contributes to this record attendance as well.

Modern Masters is less like a set of Magic and more like a somewhat loose Cube. That might sound insulting, but I actually mean it as a compliment. There are a lot of well-supported archetypes but the crap like Mothdust Changeling and Dragonstorm can't be ignored in an honest evaluation of the limited environment.

Whammies aside, the majority of the cards are at least playable in limited, which tends to make opening sealed pools and drafting much more enjoyable. The most notable difference between Modern Masters and other limited formats is that the more gimmicky decks are just as well supported as the "real" decks. Giants, Faeries, Tokens, UW Fliers and a slew of other decks committed to attacking in the vein of traditional decks are all available, but the card that I'm most excited about in Modern Masters has nothing to do with attacking, and I'm not talking about Grapeshot either: 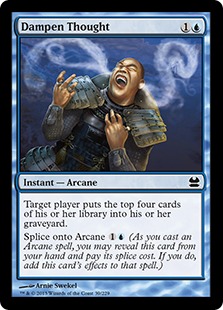 My first draft ever was Champions/Champions/Betrayers, so I never had the opportunity to draft the Dampen Thought deck in its original format, but between then and now I've won a great deal of limited matches on the back of Drowner of Secrets and Nephalia Drownyard. The major difference between those cards and Dampen Thought is that in Modern Masters, a relatively small set, Dampen Thought is a common.

Why is Dampen Thought Good?

Part of the allure of milling in draft is the desire that many of us have to be "that guy", but the draw goes quite a bit deeper than that. Milling is obviously easier to accomplish in limited than it is in constructed, though the considerations for deck-building are similar. For example, your deck needs to be very focused on being able to execute your mill plan, which consists of having either a critical mass of mill spells (a dozen Tome Scour or a few that will win the game on their own (Dampen Thought) and being able to win before your opponent can or stop them from winning quickly.

These conditions are pretty easy to meet in Modern Masters. For starters, somewhere between 2-4 Dampen Thought is sufficient as your only win condition, especially with a few Peer Through Depths. It takes resolving around 6-7 copies to actually win, but splice onto arcane makes this pretty easy provided we can survive. Luckily, only needing a handful of Dampen Thought leaves plenty of room in our deck for removal to stop our opponents from winning first. It's also helpful that Modern Masters is a rather slow format to begin with. There aren't very many creatures that set the standard for efficiency- most opposing monsters tend to resemble Grizzly Bears or be a bit on the mana-intensive side.

As far as removal options go, I tend to end up being UR with a splash of black in this archetype, most commonly using the following to ward off opposing attacks: 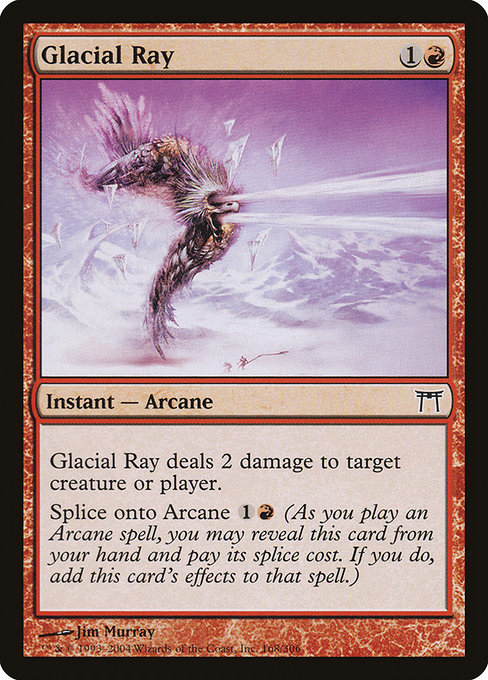 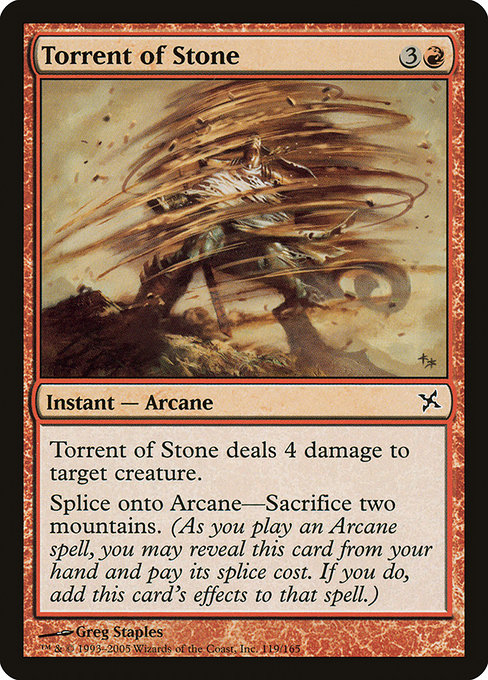 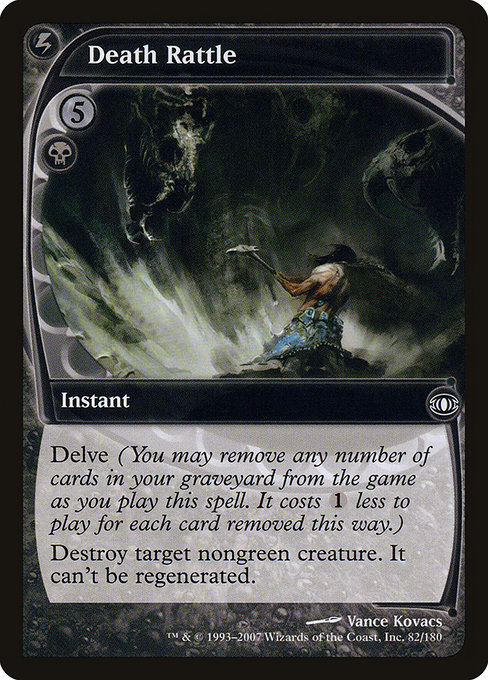 These will take care of anything shy of an x/5+ green monster, though splicing with Glacial Ray and Torrent of Stone make that doable. That's provided that you can acquire these cards, but that leads me to one of the major incentives of drafting this deck:

Your Cards are Lackluster in Other Strategies

Most of the creatures that matter in MM tend to have 3+ toughness, which makes Glacial Ray pretty unappealing in most decks. The thing about red in this format is that it's early creatures are all pretty horrendous, so a "shock" is going to matter a lot less than having something like a Fiery Fall. Once you start splicing Glacial Ray its stock goes up dramatically, but the only deck that can really dedicate this is Dampen Thought. Most decks are going to be looking at Rift Bolt quite a bit higher than Glacial Ray, so it's usually not difficult to snag 2+ copies. You also have no compelling need to draft bodies, so you'll be able to pick up every Glacial Ray you see, whereas other decks have differing priorities that compel them in one direction or another.

Torrent of Stone by all estimations should be a little harder to acquire as it kills most creatures in the format, but for some reason I see it making it around the table. You don't ever want more than 2-3, which has been uncannily easy to draft in my experience. To be fair, it doesn't play well in decks like Storm but I can't see why the Giants decks wouldn't want an answer to Errant Ephemeron. It's possible that it's undervalued solely because it can't target players.

As for Death Rattle, I'm completely in the dark about why I'm usually able to get 1-2 of these. Most likely this is due to the fact that most decks can't really utilize Delve as proper mana acceleration. Since all we want to do is cast instants and sorceries it's a pretty natural fit for us, usually castable on turn four. You know, when it starts to matter.

And as for our namesake card? Nobody wants Dampen Thought. It's a stone blank unless you're killing with it. It's an easy grab. Likewise, only you and potential Storm players want Peer Through Depths. It's very nice when your most important card is a last pick for everybody else at the table. And Reach Through Mists? That one is pretty much blank to everybody else as well.

Your Opponent's Deck Will Not Interact With Your Game Plan

There's a lot of very strong removal in Modern Masters. As everybody knows, removal is a very important aspect of most limited strategies. This is spectacular when it comes to playing Dampen Thought, because over 95% of your deck will be lands, instants and sorceries. The knowledge that you're not trying to deal damage and that removal doesn't work against your kill leads Dampen Thought players to care not for attacking nor blocking. By leaving any non-value creatures on the sideboard the Dampen Thought player gets to blank a significant portion of his/her opponent's deck.

Additionally, there's nothing in the format that resets graveyards, counterspelling the spell you splice Dampen Thought onto leaves the Dampen Thought in your hand and the discard options in the format don't especially matter because splicing onto Peer Through Depths and Reach Through Mists leaves your grip pretty full.

The long and short of it is that you are significantly better at interacting with your opponents than they are with you.

While Dampen Thought is pretty easy to draft and, in my opinion, has a strategic advantage against most limited decks, there are still some subtleties to drafting it that will make or break your draft.

Personally, if I see a Dampen Thought anywhere in pack one I abandon whatever I'm doing, take it, and don't look back. Seeing as it (along with the occasional Mind Funeral) is the decks primary way of winning the game (the secondary being the bizarre game where you can actually Glacial Ray your opponent out) the card is unpassable. If somebody passes it then they either have no intention of wheeling it or have no idea how to draft this deck. As I said earlier, nobody wants the other cards in this deck. If you get the Dampen Thoughts the rest is easy.

Obviously if you're trying to cast three copies of the same spell seven times, you'll need cheat codes to make this happen. You'll want cards with the arcane subtype at about the same frequency that other decks want creatures. Basically the only one that doesn't really perform is Petals of Insight, as it's far too inefficient. It matters a lot more to have an efficient do-nothing like Desperate Ritual than it does to have a more powerful but more expensive spell.

As such, Reach Through Mists and Lava Spike are pretty relevant. Reach is obviously better than Spike as we're almost never winning through damage, but these spells function as a pseudo-mana-acceleration for this deck. They let you start casting Dampen Thoughts or Glacial Rays on turn three and to start double-splicing as early as turn five. I usually board out the Lava Spikes that I drafted if my opponent's deck is on the slow side, but they matter a lot against faster decks.

It's going to be tempting to play those Errant Ephemerons, I know, but they're just going to turn your opponent's Bound in Silences on. You should basically only be playing Mulldrifter and possibly Aethersnipe or Mogg War Marshal. I've found myself boarding in up to 3 copies of War-Marshall against green decks/ token decks and drafting them aggressively to do so but they are not particularly valuable.

Removal and draw spells. Maybe some bounce. The most important thing you can do is to stay on plan. You're the mill deck. Understand that your deck can't kill super quickly and that you need to have a lot of arcane and a healthy dosing of removal.

Here's an example deck that I very easily dispatched an 8-4 with: 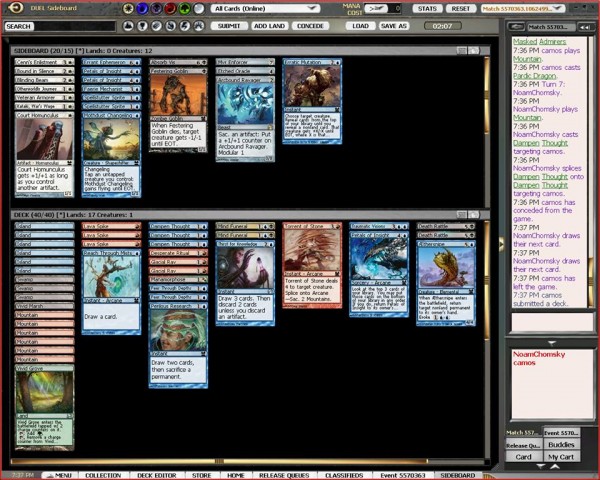 Notice the sideboard Ephemeron. It's possible that the Erratic Mutation was a better option than Petals of Insight as the Mutation has a lot of ones to hit, but it didn't end up mattering.

You'll also notice the beginnings of an artifact deck in the works on the sideboard. I moved in on Dampen Thought pick six and didn't regret it for one second.

Sadly I won't be making it out to Vegas this weekend, but if you find yourself in the draft portion I would recommend pulling the trigger on Dampen Thought. Not only do I feel that it is among the strongest options in the format, but I also feel that people will shy away from it during a Grand Prix setting. Just remember to stay on plan.