You all know the routine. Cards spike during the height of Standard play and everyone wants them. You have a few good months of big price shifts on cards, and all is well.

Then that dreaded month comes. October, and the new block rotates in. The bottom falls out of prices and if you’re not careful you’re left holding the pieces of a once-valuable collection. Prices bottom out in November and December before eventually recovering.

That’s what conventional wisdom says. It even makes sense.

Once upon a time, this was true. But times have changed. 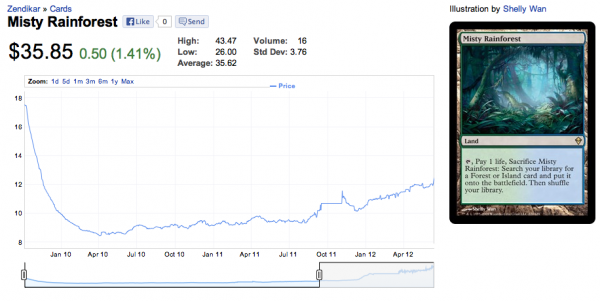 I first noticed this trend a couple of years ago while doing a case study on fetchlands. Around the time Zendikar rotated out of Standard, I noticed that prices on fetches didn’t move much at all. I attributed this to their eternal playability, put a buy call on fetches and began to invest heavily into them myself.

Conventional wisdom on the Zendikar fetches stated that their price would bottom out after rotation and then increase in perpetuity. However, following the trend of well, trends, occurring ahead of schedule, it looks like we’re already at that point.

Using Scalding Tarn and Misty Rainforest as our baseline, we see that the price bottomed out at the beginning of August and has started creeping upward since. This didn’t catch anyone’s attention until SCG raised the prices on their fetches, but even this has escaped a huge part of the Magic community. It’s possible (likely, even) that SCG used Modern to raise the prices on their fetches, but Modern isn’t going anywhere and, unlike so many speculative Modern cards, fetches aren’t going anywhere either.

Literally all the buzz in the last month has been centered around Modern (glad I covered that well in advance and advised getting out a few weeks before the bubble burst), and now it’s being dominated by Innistrad. There are very few players or authors paying attention to fetchlands, and you’re running out of time to move on these.

Pick up literally every single Zendikar fetch you can find for $12 or lower, and trade for them aggressively (ideally with overpriced Innistrad goodies), and you’ll be looking very good a few years from now. It remains to be seen if these experience a dropoff once they are actually rotated, but I’m of the opinion that they won’t. We won’t be seeing a better time to buy in, and there certainly isn’t going to be less demand for them in older formats as we move forward. I’ll be spending my Innistrad prerelease (if I’m able to attend one) trading for fetchlands.

So where are fetchlands going? We see that old ones in the best color combinations can push $25 (Flooded Strand). It will be awhile before Zendikar fetches get to that point, but they’ll likely see $15 in a year or so. There’s a few reasons I love lands so much. In addition to being awesome in game design (a resource AND a bonus? Sweet!), lands are also one of the most stable investments you can make in Magic. They aren’t going to eclipse Misty Rainforest in the “fetching a land” category anytime soon (and probably never), so there’s no downside to getting in on these now.”

Basically you can nearly replace “fetchland” with “shockland” and call it a day, though that’s not going nearly deep enough. Anyway, the fetchland move paid off quite handsomely, but it’s just another data point these days.

Okay, so apparently the “rotation dip” doesn’t apply to eternal cards. That certainly makes some sense at the surface and isn’t necessarily a huge surprise.

But that doesn’t tell the whole story. Because the concept behind the “rotation dip” is actually pretty valid. Card prices do crash as they leave Standard and bottom out before rising later.

But unlike in many years past, the trend over the past five or so years (the advent of mass internet and phone connections as well as increased interest in MTG finance) has pushed that time up earlier and earlier. Instead of cards crashing in October, they’ve moved up more and more every year. Instead of waiting until August and September to get rid of stuff, suddenly the wary MTG financier must move the cards in July. Or, preferably, even June.

I know this flies against the conventional wisdom, but that’s what the numbers are telling us.

So let’s add some more data points, all from Innistrad block, to see how our new understanding holds up.

And Geist of Saint Traft.

The data doesn’t lie. Many of the cards we would expect to see get hit by the “rotation dip” have already begun plummeting. Before June is even out. That means we have to readjust our strategies accordingly. Specifically, getting rid of these cards every year before we hit the dog days of Summer is pretty much the only way to safely whittle down your position. It also means that, outside of a few possible breakout cards, the summer Standard PTQ season won’t have as much of an impact as you might expect.

I used the three cards above because all have seen pretty constant play in the last six months, and yet none have risen as we hit Standard PTQ season as we may have expected them to. In fact, they’ve begun dropping like rocks during that same time period.

With all of that in mind, I think there are a few points you now must consider every year regarding rotation.

With all of this information on hand, I can say I’m certainly glad I’ve already moved a lot of Innistrad stuff, and I’ll now be moving the rest of it out in the coming weeks.

It also allows me to set a target sell date on my shocklands. As most of you know, I’m hoarding shocks like I hoarded fetches. But in reality I think this is a bit different case. With fetches, there was no Modern for them to go into, so all there was was the Legacy movement. This meant there was less immediate delay after rotation.

But the most important factor is the continuing growth of the Magic player base. That fact has caused a run on lands like clockwork over the past three years.

We saw Scars lands jump, then Innistrad lands, and most people I know expect the same out of shocklands. I think the time to sell and lock in profits is likely May-June of next year (assuming the climb we’re predicting). After that, I expect them to gradually decline and bottom out late in the summer, at which point I’ll begin hoarding them again since Modern will only increase their price over time.

7 thoughts on “Insider: The Myth of the “Rotation Dip””