With Standard season about to rotate, Modern season put on hold, and an array of new products arriving in the coming months, there certainly has been no shortage of buy opportunities.

I’ve been pulling the trigger like mad on opportunities left and right. From Sowing Salts on Card Shark to a MP Savannah on eBay, I’m trying to grind as much fair profit as I can.

But when I go on these buying sprees I always make sure I have one specific thing in mind: a selling strategy.

I try not to make a single purchase unless I have a thesis for why I will eventually be able to sell these cards for more cash. Nowadays trading is a rare thing for me because I spend so much time with my young one. So if I’m going to shell out hard-earned cash out of my MTG bankroll, it is absolutely critical I know what my exit strategy is.

Different acquisitions come with different theses, however. There is simply no one-size-fits-all approach to selling, and the more options you have available to more opportunity you’ll discover to make profit.

This week I’ll highlight different types of theses I come up with when I purchase MTG cards by using a few examples. This will give you a glimpse at my thought process.

Sometimes my theses are concrete and straightforward–-I know exactly when I plan to sell and at what price. Other times my purchases are open-ended and flexible--in these cases I’m okay with holding onto the cards for longer periods of time and I focus less on the immediate sell strategy.

But in general I always have a thesis. And each one usually falls into fairly defined categories.

In my opinion this is the most straight-forward strategy and I try to take advantage of it as much as possible. Because the risk is nearly zero, I’m also willing to go through the effort to execute this plan even if profit margins are fairly low. As long as it’s worth the five minutes’ time to flip these I’ll go for it.

Consider my recent purchase of Sowing Salts as an example. Recently, WeQu graciously pointed out an easy opportunity to purchase these cards for quarters with buy lists in the neighborhood of a buck. I went for it, making three purchases similar to the one below:

The exit strategy in this case is incredibly simple: sell ten copies to ABU games for $1.05 each and sell the rest on eBay, where the cheapest listing for a playset is $6.19 (mine). I have exploited a knowledge gap profitably–-arbitrage at its finest.

Could I hold these and hope for more come Modern season? Sure, and I still might hold a couple sets (I bought 43 copies in total) but taking this easy money is just too tempting.

These scenarios are often my favorite, and for good reason. It takes just a couple minutes checking a few sites for these opportunities. Thanks to mtg.gg, it’s easy to identify which random singles have favorable spreads. They don’t come up too frequently, but I’ll jump on any opportunity to buy cards at one price and immediately flip for profit elsewhere. Buy lists are great for this.

There is some overlap in strategy between the previous plan and this one. In both cases, cards are purchased cheaply. But sometimes a card’s price will jump so rapidly on the secondary market that buy lists don’t quite keep up. In these cases, you don’t have a guaranteed profit, but there is still likelihood for opportunity if you’re quick enough.

These days price spikes are weekly occurrences, but one recent example I can share is a purchase I made of Keen Senses during the TCG Player and eBay buyout, also from Card Shark.

These are now valued at $3, but there were still a handful available for quarters much like the Sowing Salts. But the problem this time is the highest mtg.gg buy price is only $0.49. Talk about an awful spread! 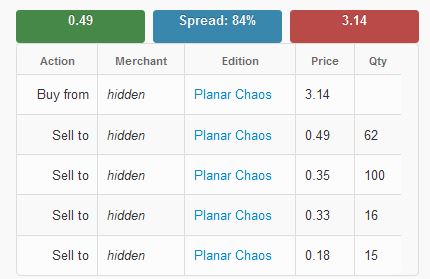 Did I just blindly buy these cards without deciding on an appropriate exit strategy? Of course not! Check out the completed eBay listings for playsets of Keen Sense: 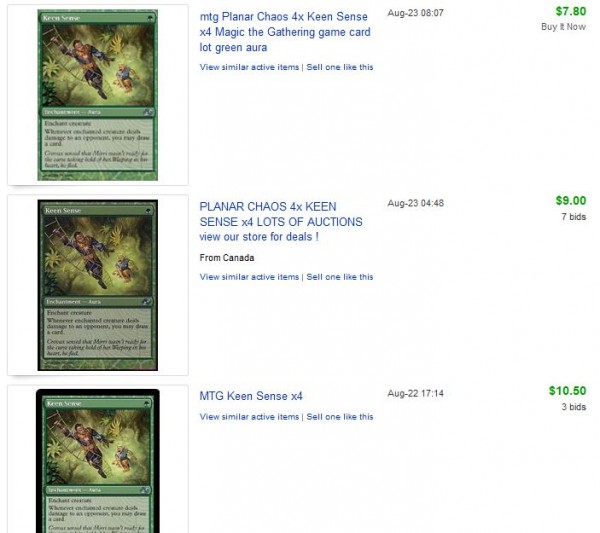 Clearly I should be able to get about $10 per set before fees and shipping. And this is the exact strategy I decided upon when I bought these hot auras. Buy during the massive buyout and sell to latecomers to the party, even if retailers aren’t interested. Again, these could increase in price further, but I see nothing wrong with taking the easy profit and letting someone else sweat it out.

The strategy carries slightly increased risk, but there’s still ample opportunity to profit here. And this same strategy is applicable to any card spiking with hype, from Horizon Canopy to Kor Spiritdancer--funny how this has happened a lot on Modern cards lately.

Now it gets interesting. Here is where we cross the boundary between opportunism and speculation. The risk profile on mid-term bets ranges from confident (INN dual lands) to guessing and rumor-mining (Didgeridoo). But despite the range in risk, the overall plan is the same: buy cards now, wait for them to rise in price based on some theory, and then sell.

Innistrad dual lands are a poster child for this type of speculation. While Innistrad block was being drafted, these could be had for just a couple bucks each. I did my best to acquire a few sets of each expecting them to go up in price within a few months.

The thesis was a simple one: Scars dual lands jumped once they were no longer opened in drafts. With the coming of a likely popular block themed around multi-colored cards, the demand for INN duals was bound to rise.

The price charts illustrate the success of this bet.

The exit strategy here is to sell towards a card’s peak price in Standard. Don’t know exactly when the peak will be? That’s perfectly fine. There’s nothing wrong with taking profits after a successful thesis comes to fruition, even if you leave a little on the table. I find selling for profit is much easier on a card’s upswing rather than on its downswing, and I’d suggest you keep this in mind.

More recent examples I am currently speculating on include shocklands (obviously) and Serra's Sanctum. The theses behind these two purchases are different, but the exit strategy is identical. Should my expectations become reality, these cards will jump in price and I’ll profit.

It may take months or even years, but a key feature of this strategy is having a thesis in place at the time of purchase. You should already have a target timeline for when to sell before you even consider pulling the trigger on a purchase.

Sometimes, you just know cards will go up in value but it’s difficult to pinpoint exactly when. These are the cards with uncertain time horizons, when it’s okay to throw them in a box under your bed and forget about them for a couple years.

For me, this category includes my Innistrad booster boxes, Scars of Mirrodin dual lands, and graded Alpha cards. I’m fairly confident all three of these bets will pay out and I have a thesis associated with each one. But there’s not really a catalyst that will make this happen within a certain time frame.

Razorverge Thicket is one of the most-played fast land in Modern right now, yet the card hasn’t budged upward in price for years.

I would like to believe these will finally get some love come the next Modern season, but in reality it may take longer. I’m okay with this–-I purchased them knowing full well my money would be tied up for years. But when prices dropped below $2 retail, it was impossible to resist.

Even pain lands (excluding Shivan Reef), which have been printed a billion times, can retail for $1.99 and they see such minuscule play. The fast lands will get there eventually.

And that’s just it--these buy-and-hold bets aren’t intended for quick profit. They are more focused on the slow and steady potential of so many cards.

Even Zendikar basic lands fall into this category. They’re never going to drop in price unless Wizards starts printing all basics in the full frame. Considering the likelihood of this is near zero, you’ve got a perfect target to acquire, throw under your bed and forget about. In a recent article Corbin has shown us he did just that.

I’m running out of words, so let me end the article with this mantra: know your outs. In other words, make sure you have a thesis before making any MTG investment.

If you can’t come up with an intelligent argument why you will be able to profit from the purchase, don’t do it! There are dozens of buy opportunities available to us speculators every week–-there’s just no need to force fit a buy.

Once you make your purchase, organize your cards so that you know which ones are intended for quick flips, which are mid-term, and which are buy-and-hold. This will also help remind you to revisit your theories on some frequency. If a thesis no longer holds true, you better either come up with another one or sell.

Let’s face it. Sometimes our bets just don’t pay out. When I went after Skaab Ruinator I had an elaborate thesis on graveyard strategies in Standard. Once it became obvious these synergies were nonexistent I bailed for a small loss.

Unless you think your purchase can double as a buy-and-hold, it’s usually not a good idea to sit on your failures. The reminders are bitter, and you may end up watching values fall further and further.

Instead, stick to your thesis and sell at the right time. Doing so will help you remain disciplined and profitable.

13 thoughts on “Insider: Always Have a Thesis”