Release events for Magic 2014 (M14) are in full swing, and prices are falling rapidly as players dump their cards onto the market for tix. At some point though, the market will stop dropping as supply slows down and demand starts catching up.

The indices for M12 and M13 both bottomed out in September after their releases, which suggests that buying in on M14 as a whole right now will result in a short-term loss. But that doesn’t mean the set can't present value for individual picks.

This time around a few planeswalkers have been reprinted, namely Ajani, Caller of the Pride, Jace, Memory Adept and Liliana of the Dark Realms. Previously I have avoided speculating on reprints in the core set due to fears of too much supply affecting upside. But in the quest for mastery of speculation, it’s necessary to confront our biases with evidence and then make rational decisions.

Examining the price history of past reprints might shed some light on the current crop of mythic reprints and whether or not there is any value in buying them right now.

The Law of One Price

Economics has a theory that in an efficient market (a market where information is readily available and transaction costs are small), prices on identical goods must be the same. The MTGO market is fairly efficient so it would be reasonable to expect the Law of One Price to hold up in general.

Baneslayer Angel was the flagship rare from M10 and it saw a reprint in M11. The titans saw their first printing in M11 and made a return appearance in M12. The two charts below show how the price of the original and the reprint move together over time. Historical prices are courtesy of MTGGoldfish. 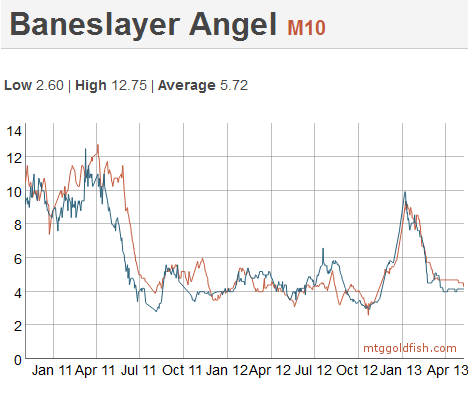 In the above chart, the blue line shows the M11 version's price, and the orange line represents the price for the M10 version. For the most part, the price of Baneslayer Angel go up and down together, confirming the hypothesis that the Law of One Price should hold on MTGO.

However, there was a period between March 2011 and December 2011 where the prices deviated and the M10 version commanded a slight premium. There's no real reason why this should be true, but M10 was a special set heralding the renaissance of Magic with the adoption of the New World Order philosophy, and Baneslayer was the marquee card of that set.

There might have been enough attachment among players that they would consider the M10 version to be the original and thus more valuable, but for the most part prices of both versions have tracked each other quite consistently. 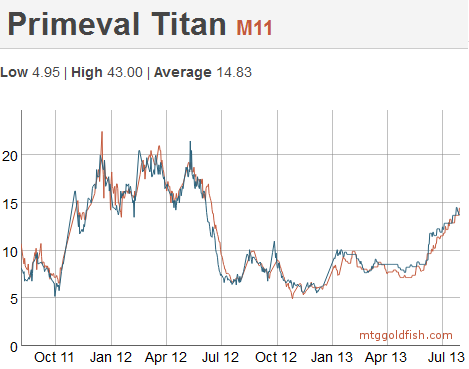 The chart for Primeval Titan shows an even closer correlation. Generally both of these charts confirm that core set reprints of mythic rares obey the Law of One Price.

The chart below for Garruk Wildspeaker shows some marked price deviations which bear further exploration. 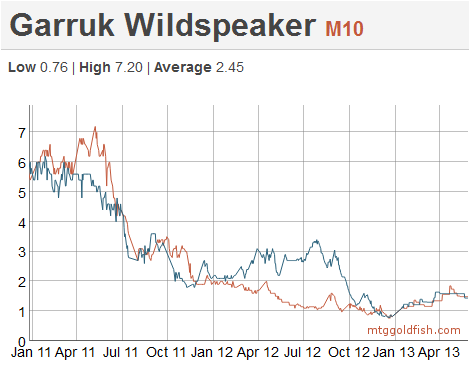 There are two big divergences. The first is between April 2011 and July 2011 when the M10 version was priced higher. The second is from November 2011 through to November 2012 when the M11 version carried a price premium.

What is going on here? Why is Garruk not following the Law of One Price? Well, the first step is to examine our assumptions.

The law requires the goods to be identical, but is that true for these two versions? No! One is needed to redeem M10 and the other is needed to redeem M11. Redemption for M10 was cut off in November 2011, meaning that the M11 version had some extra value due to being redeemable. This is reflected by the higher price through most of 2012. Once M11 was no longer redeemable, the prices start following each other again.

It's not clear why this effect is not observable with Baneslayer Angel, but I could hypothesize that Constructed-playable mythics that carry higher price tags aren't as affected by demand from redeemers. Garruk, on the other hand, was widely available with the Lorwyn version as well as a Duel Deck version kicking around.

This would mean that redemption value would be a bigger share of the price overall, which sounds reasonable and seems to be borne out by the above histories. Comparing the price histories of the M10 version with the Lorwyn version might confirm our thinking on this matter. 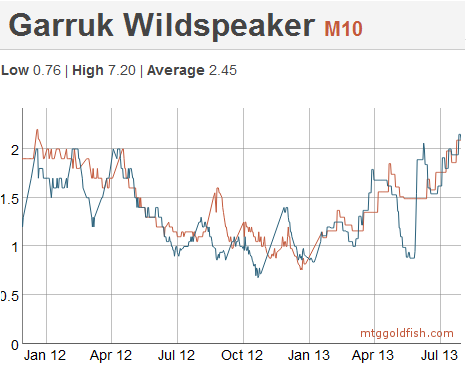 The above chart tracks the M10 version of Garruk in orange and compares it to the Lorwyn version in blue. The time period is just after M10 redemption ended. Again, for the most part prices tend to correlate, as expected. What's interesting to me in this chart is that when prices do diverge, they tend to come back to each other eventually.

In the period between July 2012 and October 2012, the M10 version gets to over 1.5 tix while the Lorwyn version dropped below 1 tix. Prices started converging though, as the Law of One Price kicked in.

The same process occurred in the April 2013 to July 2013 period. Lorwyn was an out-of-print draft queue that had come online and so a bunch of supply had hit the market, depressing prices on the Lorwyn version. This eventually corrected.

This convergence in price might be a profitable strategy for core set reprints. Let's explore whether this type of price movement has been evident. 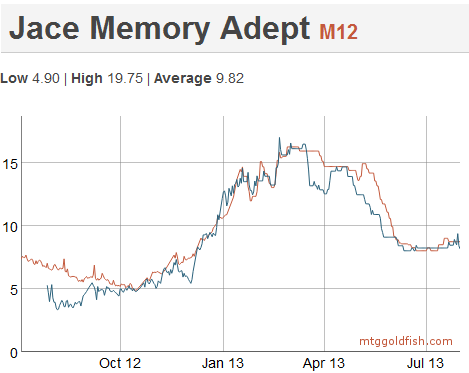 Looking at the chart for Jace, Memory Adept, we can see the price history for the M13 verison in blue as it starts in August 2012. Sure enough, by October the prices on these have converged. It ran from 3.5 tix back up to 5 tix. There is other evidence that price gaps will open and close periodically on reprints like this.

Prices taken from cardbot and current as of Thursday, August 1st, 2013.

As you can see, while M14 release events are ongoing, substantial gaps have opened up in the prices between the M13 and M14 versions of these planeswalkers. All evidence suggests that these prices will converge over time, with the M14 versions rising in price and the M13 versions dropping.

The conclusion for me is that the current prices for these M14 mythic rares are too low and that they are due to bounce back in the short term. The play then would be to buy these at current prices, expecting that the bounce back will cover transaction costs.

Further upside is possible if changes in the Standard metagame favor these cards and they see more play than they do currently. The worst case outcome is these are a break-even proposition in the short term.