At the moment, Liliana of the Veil is the most expensive Standard card on MTGO. Defying the predictions of an impending price drop, Liliana has continued to reach new highs in the face of Fall rotation. As speculators, trying to make sense of why this card has continued to rise in price could reveal future opportunities.

Investing from a value perspective is the strategy perfected by Warren Buffet, who became the most successful speculator of all time. The basic tenet is to identify what the market is valuing incorrectly, place a bet accordingly, and then wait for the market to realize its mistake. Usually investing for value involves buying the shares of out-of-favor companies, but it can also mean identifying structural changes that the market has not yet fully understood.

Buffet purchased a large stake in Coca-Cola in 1988. From a value perspective the shares of Coca-Cola weren’t that cheap at the time with a Price to Earnings ratio of 15. It wasn’t a battered-down company which the market had abandoned, but Buffet went ahead and bought a big chunk of the company anyway. The stake represented a third of Berkshire-Hathaway’s portfolio at the time, a significant bet to say the least.

Buying Coca-Cola stock in 1988 turned out to be a very good move as the company continued to see strong global growth. Although not cheap from a value perspective, Buffet had identified a strong growth company that the market wasn’t valuing correctly.

The MTGO price of Liliana of the Veil saw a long congestive period between Innistrad's (ISD) release right through to January of 2013. It did have a period of price weakness in the Summer of 2012 where it dipped as low as 15 tix, but for the most part it stayed in the 18-25 ticket range. 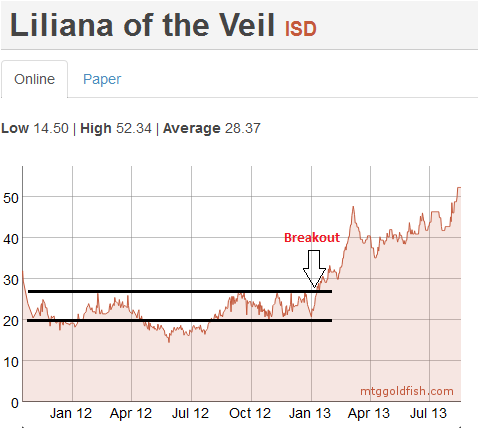 The paper version roughly mirrored this price activity. After ISD’s release, the price was usually in the $25 to $30 range. Like the digital version, there was a period of price weakness in the Summer of 2012 where it touched $18. 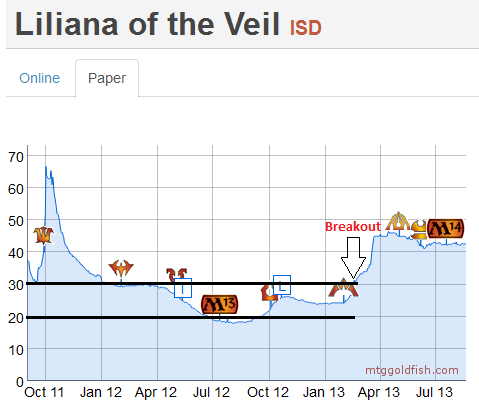 Things got interesting in January and February of 2013. On both of the above charts I have pointed out when the price broke above its trading range.

At the time, the Modern PTQ season was underway and Liliana broke out above 28 tix on January 11th. By the end of the the month, it was 30 tix. The rise continued in February, and by the 20th of that month it sat at 35 tix before heading even higher, briefly getting to 47 tix by March 7th.

On the other hand, the paper version took a few weeks to catch up to this shift. By the end of January it was still in its long-term price range, lounging around $25. The breakout occurred a few weeks later on February 19th, when it got over $31 for the first time in over a year.

In this case, the breakout was over a month after the price began moving on MTGO. Identifying the shift that was under way on MTGO could have yielded nice profits on the cardboard version.

Although looking at charts can guide decisions, often times it's only in hindsight that such trends become obvious. However, a synthesis of the value perspective and charting techniques can yield an actionable strategy.

From the value perspective, Liliana of the Veil had a number of things going for it on MTGO. In January of 2013, relatively few copies of Liliana of the Veil were coming onto the market as ISD was not being actively drafted. Besides a stable supply, playability of the card was good. It looked like the card was going to be an all-format staple as it was showing up in Legacy, Modern and Standard.

Lastly, the fact that it is a mythic rare ties the online value of the card to the value of paper ISD through redemption. Besides the impact of Liliana itself, the redemptive value of ISD on MTGO has been high due to the presence of Snapcaster Mage, the enemy-colour check lands, and Geist of Saint Traft.

All of these value factors were observable to anyone who was wiling to think about them. The strong technical breakout in price confirmed that Liliana of the Veil was the equivalent of a growth stock and had further gains to come.

Moreover, it looks like MTGO was ahead of the curve in this case, and that paper prices began following suit an entire month after the price move was already underway online. After the paper price started moving up, the feedback effect of redemption ensured further gains on the digital version.

It looks like the Return to Ravnica (RTR) version of Jace is just at the start of a breakout online. Similar to Liliana, it had a long period of price congestion where it mostly bounced between 14 and 17 tix. This week, it has jumped above 18 tix. Let’s consider the fundamentals of this card to see whether this price move might be a signal for a period of growth. 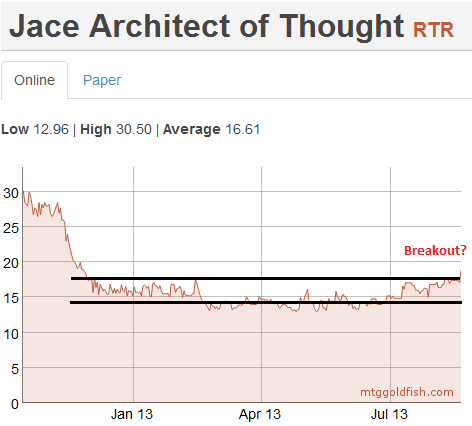 First, Jace, Architect of Thought is a Block Constructed staple, and has proven useful in Standard as well. Although playability in Block is not a ringing endorsement for future gains, its prevalence there points, at the very least, to continued usage in Standard.

Next, we have entered the period of core set draft with the release of Theros on the horizon. The supply of online RTR block cards will be relatively fixed at this point.

Lastly, RTR might not be as redeemable as ISD, but it has a number of staple rares with high value to redeemers. Half of the shocklands lead things off and then there are two Legacy staples in Deathrite Shaman and Abrupt Decay. The shaman in particular looks to be a fixture of Modern as well, a format showing continued growth.

Overall, Jace does not stack up to Liliana from a fundamental perspective, but the factors still suggest future price increases. I’ll be watching this card over the coming weeks, and if it gets to 20+ tix instead of heading back down into the 14-17 tix range, then this would be a strong signal for further price increases to come.

In terms of a speculative strategy, the paper price has not yet made a move. If the MTGO version continues to show price strength, then I’d expect the paper version to follow suit. This suggests two ways to profit. On a strong breakout in price, combined with good fundamentals, buy both the digital version and the paper version.

Advocating a paper buy is a new strategy I am considering in order to take advantage of the times when the MTGO market is ahead of the paper market. At this point, this is an untested strategy and should only be employed by those with a high tolerance for risk.

As for the MTGO version, if the paper price breaks out and starts heading higher, the feedback loop of higher paper prices leading to higher MTGO prices through redemption should begin. If you are thinking of buying Jace in order to speculate, keep your eye out for a price breakout in paper. This would signal further gains to come on the digital version.

This is a brief rundown of what I am buying, selling and watching in the market in the last week.

9 thoughts on “Insider: Looking for a Breakout Growth Stock”