As we approach the release of Theros and Standard rotation, MTGO speculators should be getting ready to start picking up cards that will be Modern-legal only. Cards that are played in Modern will have value and appreciate in price when the Modern PTQ season starts up near the end of Spring 2014.

Also bear in mind that all mythic rares from rotating sets have value to redeemers, and so keeping in mind the redemption angle is important too when evaluating potential specs.

A Look to the Recent Past

Koth of the Hammer from Scars of Mirrodin (SOM) sets a good precedent for cards that don't see much competitive play. It bottomed out in the first week of November last year at around 3 tix, and subsequently rose to over 6 tix by the first week of March 2013. The other SOM planewalkers saw similar patterns, but varied in terms of price levels.

We'll use this is a guide for targeting Innistrad (ISD) block planeswalkers where most of the value comes from demand from redeemers. 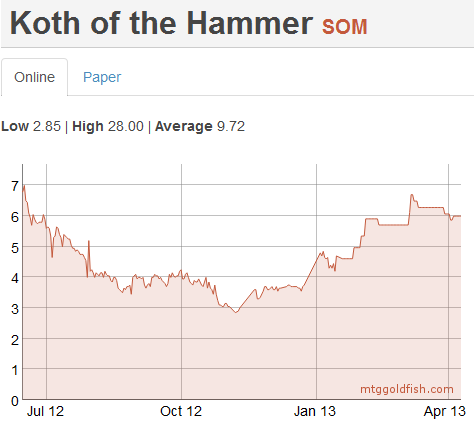 Although we don't have an all-format staple planeswalker, Karn Liberated is a Modern staple in Tron decks. Last year it bottomed in the middle of October at 12.9 tix and rebounded to 28 tix by the start of Modern season in December.

We need to keep in mind that Karn is a third-set mythic rare, so this early price bottom is due to a combination of factors. This pricing pattern suggests that a card with supply constraints (the third-set effect) and recognized constructed applications will not take as long to bottom out. 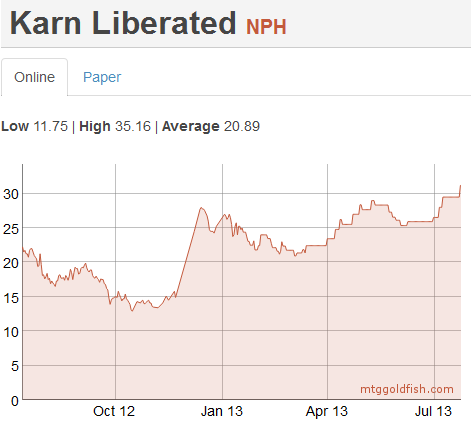 Although less played than Karn, Garruk Relentless // Garruk, the Veil-Cursed makes occasional appearances in Modern. It also has the novelty of being the only double-faced planeswalker. These two factors are important, but the fact that it comes from Innistrad (ISD) means that speculating on this card will be a no-brainer.

ISD is going to present quite a bit of value to redeemers due to the presence of Snapcaster Mage and Liliana of the Veil. It's also a landmark set in terms of casual appeal due to the gothic horror theme. Once prices come down on ISD cards in general, the ISD mythics will get increasingly scarce online and start moving up in price.

Garruk might get overlooked in favor of the more conspicuous Liliana, so be sure to sock a few of these away in October.

Speaking of Liliana of the Veil, she casts a long shadow in Modern where she anchors Jund decks and she also does work in the latest iteration of B/G decks (aka The Rock). Timing the bottom on this card could pay off handsomely. I put out a poll last week for people's guesses on what price it will bottom out at, and the results were quite flat. You can see the poll here.

My own guess was for the 20-25 tix range, but I'll be watching this very closely. There is little doubt in my mind this will be back into the 40+ ticket range by the time Modern season rolls around next year. Although getting in on this card will tie up quite a bit of capital, it's as close to a lock as speculative opportunities get these days, with little chance of a reprint in the coming eight months.

From a powerhouse planeswalker, we come to the much maligned Tibalt, the Fiend-Blooded. This card had already bottomed in my estimation. It's basically seen zero competitive play since it was printed and there are no indications this will change as it rotates out of Standard. The only value this card presents at the moment is from redemption and a small amount of casual appeal.

Fortunately, Tibalt appears in a set that will present good value to redeemers. Avacyn Restored (AVR) is chock full of angels, including the Modern staple Restoration Angel. This ensures strong casual appeal.

It also has the miracle mechanic. Cards such as Terminus and Temporal Mastery show up in Legacy where Sensei's Divining Top is legal. AVR has its fair share of competitive cards as well as a healthy dose of casual appeal.

The other walker from AVR, Tamiyo, the Moon Sage, has seen some competitive play in Standard so it carries a higher price tag. Koth is probably an excellent guide for determining the bottom on this card, with some premium applied due to being from a third set.

I'll be looking to pick this card up near the end of October in the 3 to 5 tix range. This target price range will get narrower as we move into October. Again, being a part of a set that will have demand from redeemers ensures Tamiyo will see higher prices in the winter.

The last planeswalker to examine is Sorin, Lord of Innistrad. At the moment, Dark Ascension (DKA) presents almost zero value to redeemers due to the relatively high price of the online cards compared to paper versions. This might change, but for the moment I am cautious when considering speculating on any mythic rare from DKA.

Outside of redemption though, Sorin has seen some Standard play, thus should not be discounted from showing up occasionally in Modern. However, showing up in a duel deck reduces the upside on this card.

If you are looking out for the next speculative opportunity on MTGO, my advice would be to save your tix until October and start acquiring rotating mythic rares then.

The planeswalkers of ISD block will be a great place to start, particularly Liliana and Garruk. Buying Tibalt right now is good value. Stay away from Sorin though, and be cautious when considering any DKA mythic rare.