One of the most difficult aspects of investing lies in the troubling decision of when to sell.

We find cards to acquire readily–-prices are favorable and we develop theories as to why they should increase in the future. But even when our theses occur as we predicted, we must determine when to sell out of a position.

Fortunately there’s already a basic concept in Economics that can help us decide when to sell: supply and demand. 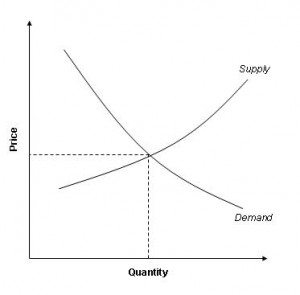 This may seem obvious, but the traditional supply and demand curves truly do highlight an underlying concept that many investors overlook. This week I will remind everyone of some Economics 101 and use these concepts to underline my selling strategies.

My selling strategy in both stock and MTG investing can be best defined by the basic demand curve depicted above. For those unfamiliar with it, the curve is simply a representation of the amount of demand for a particular item (on the x-axis) at a given price (on the y-axis). As price goes up, demand drops.

It’s becoming more frequent nowadays to see irrational behavior from speculators. That is, when a card gets notice and shoots up in price there is a sudden spike in demand which causes the price to rise even further.

This type of irrational behavior is what occurred with Didgeridoo. The price inched up a little bit, got the notice of many speculators who then wanted the card even more, and drove the price up further on this unplayable Homelands artifact.

In rational times, as a card's price increases, demand gradually drops. Then eventually supply and demand match up when the “Invisible Hand” finds the appropriate price for a card.

This is how it’s supposed to work. I do my best to leave emotions out of my investment decisions as I focus on those basic curves.

Let’s take Detention Sphere as an example. I’ve been getting a little bit of heat from a few members of the QS community for already pulling the trigger to sell a couple play sets. The general consensus is that this card is going higher in price–-I don’t necessarily disagree, although I don’t think the “enchantment-themed” Theros is nearly as synergistic with Detention Sphere as many had hoped.

Following the basic concept of the demand curve, I'm less in love with investing in this card as its price increases. Don’t get me wrong--this was a sweet pickup as early as a month ago, and I’ve been enjoying the healthy returns. But I would not want to invest in this card at $14.50 per play set, because I feel the upside from here is much less.

This is trivially obvious but worth mentioning as a reminder--as an investment increases in price it becomes a less and less attractive investment. And if a card’s price gets so high that you find yourself no long interested in acquiring, then it’s probably a good time to begin selling. Sure, you can sit on some copies to protect for further upside. But if you follow the basic demand curve, a higher price should mean you want fewer copies of a card.

Going back to the Detention Sphere example, I am beginning to sell some of my copies because the price is going higher. I’m profitable on every one that I purchased at the given price so there is no fear of loss holding me back. As the price continues to rise I will continue to sell more aggressively.

With this plain and simple strategy I admittedly won’t make the most profit possible on this card. I’m fine with that. Remember the name of the game is not “make more money in MTG than everyone else”. It’s “make money in MTG”. By buying low and selling at a higher price I am succeeding while also mitigating some risk (reprints, shifts in metagames, etc.)

A General Warning About Emotions

It’s easy to fall in love with a successful investment.

For those who jumped in on Serra's Sanctum with me a month or so ago, we’ve made some serious profits by following our keen awareness of MTG speculator behavior. Enchantment Theme in Block + Reserved List + Fringe-playable Land = Good Investment.

This one was almost too easy.

The QS Forums went abuzz on this card when the TCG Player buyout occurred. Since then the price has about doubled on the legendary land. I sure enjoy 100% profits when they come.

But now this card is suddenly twice as expensive to invest in as it was last month. With the higher cost, my demand for this land has decreased drastically. On the other hand I am so excited about calling this one correctly, and I have an emotional feeling that they can only go higher. After all, they are on the Reserved List, right?

They may go higher eventually, and right now they probably won’t drop much either. But I'm just not interested in investing more money in this card at $35 each. The upside is so much less in the near-to-mid term than it was last month.

My decision: sell. Take my amazing profits and find the next investment. It is so easy to convince myself that these can go higher, and in reality they might. But I have to consider my demand curve, along with the fundamentals.

I don’t see any bonkers Legacy enchantments in Theros that may push Serra's Sanctum into Tier 1 decks. Casual demand may increase a little, but any price increase driven by casual demand should be much slower.

The drastic price spike we saw in the graph above wasn’t driven by casual players. It was driven by speculation--and largely irrational speculation at that. The same occurred with Gaea's Cradle once the new legend rule was announced.

Since the card peaked in June the value has been on a steady decline. The price became so high suddenly, and this gradually caused players to sell theirs. Price went up and demand went down–-basic economics.

The same trajectory is possible on Serra's Sanctum. If speculators drove the recent price jump, it may slowly trickle down in price over the coming months. I see no reason to sit on these investments waiting for the next catalyst when there are many other opportunities out there.

Hopefully this article conveys my personal selling strategy to the skeptics out there hoping to time the market perfectly. I see no need to try to time every peak and valley perfectly. This strategy is time-consuming and carries additional risks I believe are unnecessary.

Instead, I implement the simple “buy low, sell high” strategy using a basic demand curve concept. As an investment’s price rises and I become profitable, I start to trim back a position. This strategy ensures I lock in profits while automatically keeping my behavior rational because it trims down my demand with a rising price.

Profit is all I’m after, and this strategy helps me remain disciplined to achieve my goal consistently.

Serra's Sanctum and Detention Sphere aren’t the only cards I’m trimming back for profit as prices increase. Here are some other recent sales:

24 thoughts on “Insider: Selling and the Demand Curve”