The announcement for MTGO Theros (THS) prerelease and release events went up on September 16th on the mothership; you can see it here. WoTC has decided to change the structure of the 16-person sealed deck release queues, reducing both the cost of entry and the prize payout. Here's a summary of the changes.

There's been much outrage on the internet at the change. You can see some of it on reddit at this link, including a response from Worth Wollpert of WoTC. On the surface, this is a 4-ticket drop in entry, but about a 1.7 drop in sealed boosters awarded per person. The numbers look pretty bad, and many players have expressed their frustration.

But is this the case of a vocal minority being vocal, or will players in general avoid the THS sealed queues in October? Let's delve a little deeper to figure it out.

From an economy-wide perspective, every booster and event ticket is created by WoTC, either in the queues or in the store. So, let's consider how WoTC perceives the change. Are they going to see a big benefit from the slashed prize structure? On the surface it definitely looks that way, but consider this.

The change in entry fee and prizes amounts to slightly less than a 0.4% increase in the price of boosters entering the market as a whole. So from the macro perspective, each sealed event will deliver a similar amount of boosters per tix used as entry fee. The catch is that you have to count opened product and sealed product as the total amount of boosters. For WoTC, this is absolutely how they do the accounting so this top-down look is a reasonable way to think about it.

On the surface, this change is not going to be a big deal in the MTGO economy, but any policy change typically has distributional consequences. When players participate in release events on MTGO, they are not thinking about the entirety of the online economy. They are enjoying a personal experience.

Previously some players enjoyed the prize payout because they captured most of the value in the event. The players who didn't get any prizes were subsidizing the above average players, the ones who could consistently win prizes. Now things will be different.

Let's look in on the average player, this time expanding our analysis to include a budget constraint.

Comparing the cost and prize structure of release events in a vacuum is a knee-jerk reaction. In order to do proper analysis we need to give our average player a budget to work with. We know that not much is changing from WoTC's perspective, so let's try to square this reality with the player's reality.

Let's suppose our hypothetical player has 120 tix to spend on sealed queues during release events, and let's also assume the average player is constrained by budget and not by time.

Previously: 120 tix is enough to enter five events, getting 30 boosters of opened product and just over 19.7 packs in prizes.

Now: 120 tix is enough to enter six events, getting 36 boosters of opened product and 13.5 packs in prizes.

Here, the numbers make it clear that a little over six boosters has been redistributed from sealed prizes to opened product. This means that some of the value of release events has been shifted from the players who won prizes to every player who enters the event. This is a good thing overall for the growth of MTGO.

More players getting value means fewer "feel bad" experiences. Players will feel better about going 1-3 or 0-4 if they can play in more events. A growing and more active player base has to be a good thing overall, and probably means the average skill level in release sealed queues will decrease. Although grinders have been whining about the reduced prizes, it will be easier to win prizes with more average-to-below-average players in the queues.

Due to the reduction in sealed boosters awarded as prizes though, fewer packs will be resold into the secondary market. Not to mention the fact that packs are being added over more events in time.

This has implications for speculators. Fewer packs resold and a longer time frame means that booster prices in terms of tix will be higher on average than they have been in the past during release events.

Let's examine how the last large set was released online and how the prices of opened and sealed boosters fluctuated during the release events for Gatecrash (GTC). I'm using GTC instead of Return to Ravnica (RTR) because it looks like the changes in the redemption fee have impacted singles prices almost exclusively. THS and GTC both have the same redemption fee so they are the best comparison available. 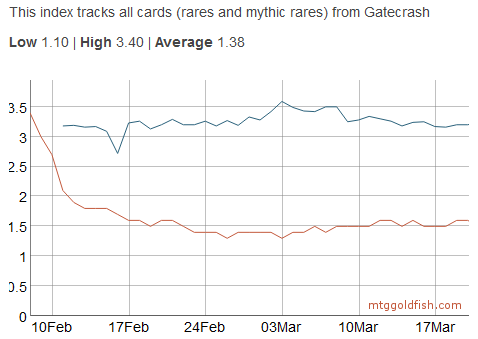 As you can see, the price of the average rare drops steeply over time before bottoming out at the end of February. This is a fairly standard pattern online as supply floods the market during release events, bringing prices down. Eventually prices drop far enough that more players start buying what's available and/or they start holding onto their cards. Either way, prices stabilize.

The blue line tracks the booster price of GTC on the secondary market. GTC boosters dipped briefly below 3 tix, but generally stayed in the 3.0 to 3.3 ticket range for most of the GTC release events.

Without a steep drop in secondary market booster pack prices, the surety of speculating on boosters is diminished. It's doubtful we see THS boosters dip below 3 tix like Gatecrash did, and I'd expect boosters to be in the 3.4 to 3.9 ticket range during release events.

As for the THS index, once release events open, I still expect the price drop to be just as steep as any other release event. The fact that product is being shifted from sealed to open makes things a bit murkier though. Just because more cards enter people's collection doesn't mean there will be an equal increase in cards entering the secondary market.

Eventually prices drop enough that players stop dumping their cards for tix and thinking about playing Constructed. The price bottom for the THS index will probably be lower than previous sets, but the new cost and prize structure for release events will not completely crater the secondary market.

It is bad news for speculating on boosters though. Prices on boosters should be more steady and closer to the fair value of around 4 tix.

Last year, I managed to successfully speculate on 1000+ boosters of GTC. This scale of activity might not be worthwhile going forward. My comfort zone for speculating on boosters was to buy in the range of 3.3 tix or less for a large expansion like THS. This value will have to be adjusted to the new realities of MTGO and it will be interesting to watch how the price of a THS booster evolves over time.