The past few weeks have been a wild ride for speculators. With Standard rotation looming, so many price fluctuations are taking place. Innistrad block cards are pulling back as they say farewell to Standard. Well, most of them anyways. Liliana of the Veil and Snapcaster Mage may be the big exceptions.

Meanwhile, players need to fill the gaps in their Standard deck strategy that have been vacated by the rotating cards. Enter Return to Ravnica block cards. Now these are getting their time in the spotlight–-they are opened much less often nowadays and demand should increase. Hence, we have trends like Jace, Architect of Thought’s:

My advice as Theros launches is to begin selling some of these hyped cards. Feel free to try and time the market perfectly. This is a gamble I usually avoid because I’m risk-averse and like to lock in profits. But there’s plenty of merit to the strategy.

With all these recent spikes, you should be profitable on many holdings. Ringing the register and earning some dough should be a great feeling.

Now I have a question: what’s next? We’re generating all this revenue from sales, but there may not be an obvious place to speculate next.

A Time for Quick Flips

This is arguably the most interesting time in Standard from the standpoint of MTG finance. In addition to the movement on cards, both rotating and non-rotating, we begin to see how the newest set impacts the format. Many players are speculating on what strategies will dominate and what Theros cards support those strategies. This is a fine approach.

But I like my approach a little more due to my risk aversion. I simply wait until the first SCG and Pro Tour results come in. A SCG Standard Open just concluded yesterday (sadly results aren’t available until after this article is due). There were likely some Theros cards that made a splash–-these could be worth grabbing for a quick flip.

Or perhaps with a smaller card pool, we learn that something like Dreadbore is actually an amazing card. Perhaps Rakdos's Return makes a comeback. Either way, there will likely be something that spikes in demand as a result of these events. My advice is to buy quickly into these opportunities for the quick flip. To make this a profitable endeavor, you’ll need liquidity.

Remember to favor mythic rares for their higher price ceilings. Avoid speculating on expensive rares unless they are multi-format all-stars. And even then, rares don’t exceed $20 cash nowadays--don’t expect this to change. I’m looking at you, Thoughtseize.

Hey look at that, AlphaBetaUnlimited is a newly launched seller on TCG Player? Is this the ABU Games? If so, then it’s interesting to see another major retailer on the site. If not, then ABU should try and go after that guy for using their name if they can. Seems a bit dishonest to create a seller profile and name yourself after a major retailer. Just saying.

Okay, back to the topic at hand.

Quick Flips Not Your Thing?

The quick flip speculation route has made me solid bank in the past. Craterhoof Behemoth and Tamiyo, the Moon Sage were both cards I purchased after they saw play in a major Standard event. By the time they arrived in the mail their sell and buy prices jumped significantly, providing me with an easy, profitable outlet.

But I recognize not everyone on this site has the same opportunities I have. Mainly, this refers to my location. Being in the United States means I have more buying and selling outlets than some members in other regions. As a result, the quick flips may not be viable due to time lag and/or shipping costs.

No need to fear, I’ve got a couple other ideas up my sleeve.

May I suggest moving some profits into a booster box or two? Innistrad boxes reached $160 while still in Standard. While I don’t expect Return to Ravnica boxes to reach quite as high (more supply, arguably less fun to draft) I still fully expect these to rise in the coming year. FYI I’m taking my own advice on this one--I just purchased two more boxes last week during an “eBay Bucks promotion” of sorts. Parking hundreds of dollars into sealed product isn’t for everybody, but it’s a safe way to convert short-term gains into long-term investments.

Modern can be a tempting format to invest in, but I’m becoming weary of this play. I already have sizable Modern bets and I’m hesitant to deepen them. This is mostly due to risk of reprint--I still expect some sort of Modern Masters 2.

And if this doesn’t happen before Modern season, there are still the new Commander decks which could potentially have many Modern cards. For example, I could see Wizards including fetchlands and/or Worldwake manlands in each Commander deck. Boy, wouldn’t that stunt the growth on stuff like Celestial Colonnade?

Because every Modern staple has a potential target on its back, it’s difficult for me to suggest many safe bets in this format. I still like sideboard cards Torpor Orb and Spellskite. Scars of Mirrodin dual lands are safe, but they also haven't really moved at all. I sure hope these cards start to get some life in them next Modern season.

Other than that, the only other safe Modern bet could be original-set foils. Not everyone has the cash to sink into foil Liliana of the Veil or Snapcaster Mage, and the upside on these is arguably less because their prices are already so high. But how about foil Melira, Sylvok Outcast? Or foil manlands? Or even foil M14 Mutavaults, which are so much cheaper than their Morningtide counterparts despite having identical artwork? The same goes for Scavenging Ooze. 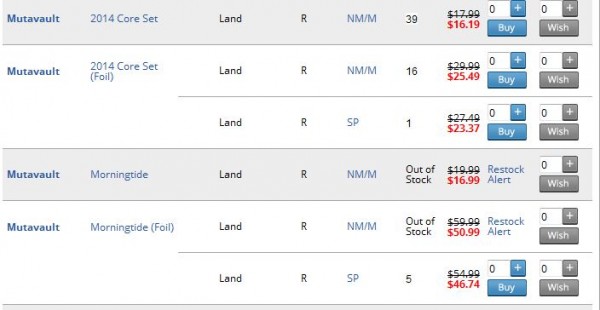 These are all viable places to park some cash if you’d prefer a longer-term time horizon and don’t have access to quick flip opportunities.

Don’t forget cash is king. When I am looking to unload a position, the most powerful bargaining tool people can present is cash. Trades are nice, but they don’t yield true monetary gains. These are only achieved when you have more cash in your pocket than when you started with.

Therefore, it’s okay to sit on some dough while we wait for things to evolve. You don’t have to be in a ton of speculative positions all the time. Sometimes having increased liquidity is advantageous because it allows greater flexibility when the time to buy does finally come.

And if you absolutely hate cash because you fear your net worth drops as inflation creeps higher, you could always do what I do. Every time I hit a certain threshold in sales, I take the profits and invest in the stock market (or as I like to call it, “RL Investing”). This isn’t for everybody, but it’s a smart way of converting paper gains from MTG finance into a sustainable investment in your future.

The approach may be less exciting, but it’s also much less work and more stable. Major companies on Wall Street will be around for many years to come. We can only hope the same is true for Magic, and that ten years from now I can be writing a similar article about Standard rotation.

11 thoughts on “Insider: What’s Next After Rotation?”