Last weekend we witnessed the new metagame in Standard during Pro Tour Theros in Dublin. I had the fortunate geographical location of living in that same city. Furthermore I was doubly lucky that this was the first PT in ages that is 'publicly open' to the public. This means we have more reliable information from spectators creating a significant edge in the MTG finance world.

In this article I want to expand on the way I planned, thought and acted during Day 1 & 2 of the Pro Tour. I want to reflect and share some thoughts on it in order for the next Pro Tour to be as successful, since Wizards is very satisfied how we Irish people welcomed them all.

In the week before the Pro Tour, I honestly did not do enough to gather information about the decks being played. I only managed to meet some Canadians and play some matches versus their shells which were BRW Midrange, BW Control, RDW etc. It looked pretty straightforward what kind of shells were around.

On the Thursday I played the Standard tourney with my UB Master of Waves shell, I played more Control with Sensory Deprivation instead of Cloudfin Raptor & Judge's Familiar. I went 2-2 but the experience I got when I landed Master of Waves made me very bullish towards the card. My deck was mediocre at best but the idea could have stretched (we all saw this on the weekend) much further. The LGS in the meantime got visits from several teams buying out cards such as Boon Satyr, Mistcutter Hydra and so on. I followed that trend and purchased Hydra's online.

In hindsight I should have went to the Pro Tour venue to scout possible purchases by people at the 2 vendors present. I felt that there might be people playing in the Standard tournament but more importantly; I anticipated people buying cards at the LGS rather than the venue for the sheer reason that it is cheaper. Luckily Joaquim N. in the forum had direct contact with his contacts and presented the following:

Of course this gives me no complete information but it gives me an indication the Master of Waves , Fiendslayer Paladin & Hero's Downfall are pretty popular because I do not expect casual players to buy them all up. I only ordered a few on that 10th of October (Thursday evening) and in hindsight I should have pulled the trigger especially with the CFB knowledge I got passed. There are small indications that can snowball pretty hard resulting in a spike as we witnessed last weekend.

I thought really hard if I should advertise my 'coverage' on Reddit too. And if I did how I should prioritize the flow of information. From a business point of view; one should give priority to the ones who are subscribed to us because we pay for information whereas /mtgfinance is 'free'. Therefore I decided to include the Reddit audience in my coverage by redirecting them to my Twitter for the following reasons:

The threads on Reddit can be found here; Day 1 & Day 2

I am curious if other QS members agree with my view, and if not the reasons for it. Let's move on to the the actual Pro Tour happenings.

My normal planning was to attend university from 9 till 12 and head to the PT as soon as possible to be on time for Standard. But I felt the opportunity cost was too much so I went straight to the PT. I was kinda late with my decision as decklists had to be handed in at 9:45 AM and I arrived at 10:15 AM. I think if I wanted to be there as early as possible that I should at least witness the last buys at the vendors so I can get more information about what is going on.

When the Pro Tour was in its draftphase, I had a look around the venue looking for a table where I can sit down and communicate with the others. The WiFi was really good as there were 3-5 different channels; unsecured, MTGplayers (including visitors), Judges, Media and so on. I was lucky I got hold of the Media password as the more public WiFi channels were quite slow and unreliable.

Most importantly was a powersocket that was near impossible to find except in the media room or in the Pub where side events were organized. For the rest before Standard started, I Tweeted about the vendor prices, and talked to my friends who had media access. They had interviewed a few players so that was very valuable information for me. 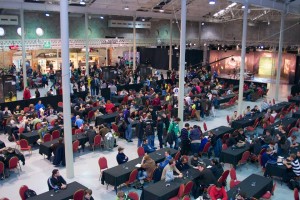 As you can see the rail is very close to the outer tables. It is harder to watch the play at the 2nd tier outer tables. Behind the rail there were the cardvendors, and a coffee stand and hotdog stand.

Like 20 minutes beforehand I had to prepare the reporting for the 1st round of Standard. I think there was a five to ten minute delay on the stream for Twitch Viewers regarding the featured table. Luckily the top tier tables were right next to the rail so I could see everything very clearly. I wrote down all the names of the respective SCG/CFB teams and walked around the rail about three to four times with my notebook. To my delight Sam Black, Kai Budde, Melissa de Tora and Owen Turtlewald were setting right next to each other with Martin Juza, Olle Rade & Frank Karsten being 1 table behind them. The first four names played SCG's MonoBlue Devotion as correctly predicted Nick Becvar in the forums ( One Two Three & Twitter @Becvar )

ChannelFireball all played the same deck. I had the luxury of encountering Kibler and Nakamura at the other side near the rail so I had a good glimpse of what was going on there. I tweeted in the sense of Purphoros, Frostburn Weird, Zealot and Reckoner to QS. Conley posted his deck already which you can find at http://magic.tcgplayer.com/db/deck.asp?deck_id=1165136 . It looked really fastpaced as multiple members of CFB were already finished and spectating their team-members.

So I had to report on three different terrains; QuietSpeculation, QS Forum and Twitter/Reddit and in that order I prioritized the communication line which I have discussed before. After Round One and Two of Standard I felt that most speculation things were done for Day One so I headed over to the Pub who dedicated a whole floor for us Magic players to enjoy free Theros Drafts. Before I conclude this section, it is important to know that the decklists will only be posted on Saturday evening so there is still merit to attending Day 2 to see what decks are being played on the top tables that are not being reported by Wizards itself.

On Day 2, my friend brought his Cube with him but I resisted the temptation to join in as I found it more handy to know exactly what the Top 30/50 players were playing. The only type of public information available was this after/around Day 1: Now certain purchases made by teams/players make sense because Hero's Downfall & Fiendslayer Paladin were good selling cards at the local vendors. However this type of statistical breakdown does not include any performance of the deck itself. We should be more interested in seeing what decks are performing hence we value Quality over Quantity the longer the tournament progresses. In the beginning we focus more on Quantity of decks available that can determine the aggregate demand. As time progresses one transitions to Quality in the sense of looking at the decks that have a majority share in the Top X rankings at a certain round.

Later on Wizards posted the 5-0, 4-1 archetypes at http://www.wizards.com/magic/magazine/article.aspx?x=mtg/daily/eventcoverage/ptths13/Constructed_Archetypes but at the time of doing my research this was definitely not online yet.

So I felt obligated to do my own research and I came out with this: Obviously I did not do a great job as there are still blanks left. This has to do with the assumption I was going to watch the Twitch Stream because several featured matches involved people like Brad Nelson & Reid Duke. Basically the Mono BlueDevotion deck made a strong showing because the other decks were no real nightmare matchups for it (Anything involving sweepers that is).

I felt I could not do much more than that for us QuietSpeculators on Day 2 after creating such a Top x metagame. MTGTop8 has the full decklist present at http://www.mtgtop8.com/event?e=5787&d=233565 in case anyone is interested

I feel we made a huge impact in the price development of Master of Waves, Nightveil Specter, Tidebinder Mage, Nykthos, Shrine to Nyx, and Thassa, God of the Sea. I made the call on Soldier of the Pantheon and I highly believe in the card being a contender similar to the likes of Boon Satyr. Personally I feel I could have reported a bit more frequently and clearly on Day 1. On Day 2 I definitely missed out on some metagame analysis as I showed you with the screenshots.

I do think there are opportunities for other Standard cards to grow that were under the radar or were underperforming because of the local Pro Tour metagame. In particular the M14 cards will have a stable floor like Mutavault and Lifebane Zombie. Even the mythics might be worth touching as Chandra Pyromaster was at the same price level as Elspeth, Sun's Champion and Stormbreath Dragon despite the amount of supply already available opposed to THS.

Lastly I want to thank you all for supporting, motivating me during the Pro Tour, it has been very exciting times!