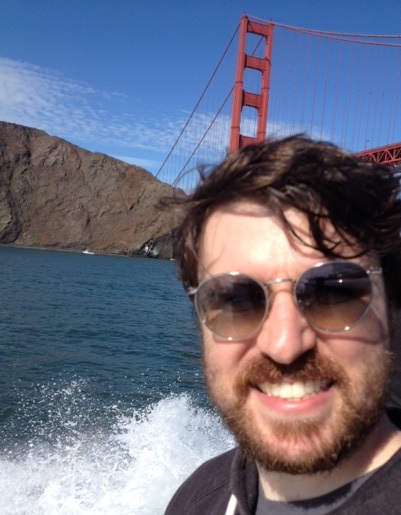 Welcome back! Last week I discussed the technologies I'm basing my data warehouse on, and did some reporting on cards I thought were worth shorting based on the Pro Tour results. This week, I'd like to go into how to construct an object oriented data model and then focus a bit on the new face of standard, and what that looks like for MTGO speculating.

When storing data, the data model you employ can decide a lot about how you will report on that data, and have some easy to miss consequences deeper into a project. I want to share a bit about the model I'm using, and some issues I've encountered along the way!

In the previous article, I talked about how I chose to use a relational database. This is a pretty common decision in a modern database, but if you aren't familiar with this, it might take some explaining.

Here's an example of a flat file, something you might open in Excel:

A relational database takes the flat file and expands it, by separating out common elements and linking them with keys. A simple way to expand the above table into a two table setup would be as follows:

By using a key in the card table, I can now reference the type of card by a key and create a relationship between a card record and a type record. Looking at the card table, there may be tables that could be spun off.

This may look like a lot of work, but it provides several key advantages. The primary advantage in this case is that card type is now written to the database only once for each value and then related to each card of that type. If Wizards decided to errata the type from "Instant" to "Fast Spell", I would change one record, and that change would reflect on the thousands of cards sharing that type quickly. It also provides performance benefits. If I wanted to know how many card types there were in a flat file, I'd have to search a table of thousands of cards for all the unique card types. In the relational model, I can answer that question very quickly by presenting all the records in the card type table.

In my scenario, I want to build a model that can store the MTGO event data that wizards provides. To do that, I have to come up with a logical way to break down the data into separate tables with keys to link them. Since the data is event data, an event table is a logical first step. In each event there are players, and decks, so those could form the next two tables. Finally, each deck is composed of cards, so there had better be a card table.

This is where my data model stopped originally, which turned out to be a very critical mistake. I assumed at the time that since I was only reporting on event data, my data model would be card version agnostic. When you play a Mutavault, it doesn't really matter if you are playing the new M14 Mutavault or a PRM version of Mutavault. This decision was very shortsighted. My primary goal for the whole project was to tie these event numbers back to financial numbers. To do so, I would also need card versions PRM Mutavault has a completely different price than the M14 Mutavault and eventually these prices differences would become very important (when I started my bot chain). So I went back and added sets and table that would link sets to cards that I called "card In set." I also dropped the user table because I realized I didn't have too much interest in tracking specific users results.

This is what my basic data model looks like currently: 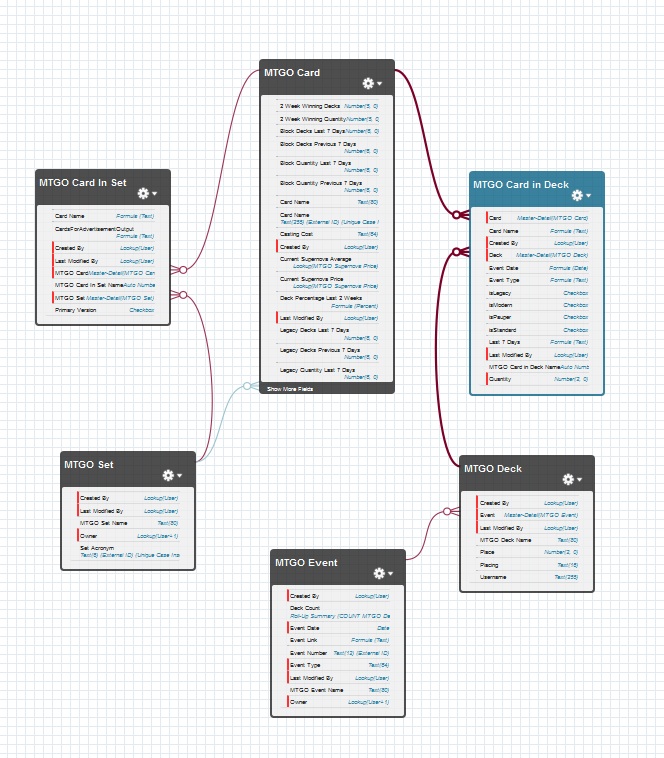 This entity-relationship diagram (ERD for short) is a way of visualizing tables in a database. The lines represent relationships, whereby one table stores the key of another table and cements the link. Card became the primary object because all my reports center around cards. This has an advantage for reporting, as I can get most of the important information I need right off the card table.

If you have any questions about this type of data model, or how I structured mine please feel free to ask in the comments. Next week I plan to go into a bit of detail on how I physically get the data from wizards and push it into these tables. There might be some code (I've been told by a few people that they are interested in this sort of thing so hopefully I'm not boring too many people)!

Now to the reporting. I've actually held off looking at this standard report until I started writing this article, so I'm really excited to see how standard is shaping up since the Pro Tour. The table I present to you is all the standard mythics and rares reported in decks by Wizards over the last 2 weeks for Standard. I'll include my analysis at the bottom after the report!

Here are the complete tables in google doc form (including Rares 51+).

I hope you enjoyed this week's article. Next week I'll be focusing on what it takes to actually harvest online data in the automation section. For the speculation section, I'm not sure yet. It might make sense to just analyze standard for 1 more week in preparation for redemption. If you have a strong opinion let me know!