On Saturday I had the opportunity to attend GP Louisville and do something I’ve never actually done before. I skipped the main event at the GP and did nothing but network, trade and sell cards.

Talk about refreshing! When there’s no concern over when the next round starts and what my record is, the atmosphere instantly becomes more laid back. I walked to lunch with @ZachSellsMagic (super nice guy by the way), I took my time selling cards, and I even played some EDH. Oh, and I even made the mothership’s website in picture form! 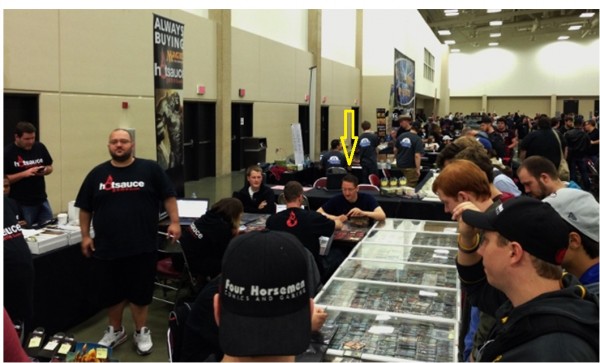 Clearly I should do this more often.

This week I’ll do my best to break down what dealers were buying aggressively and, more surprisingly, what they weren’t. I’ll also indicate what cards I am continuing to sit on for future potential growth.

My Standard cards required the least amount of thinking when it came to selling to dealers. I knew going in I would sell any of the hyped cards that spiked during the Pro Tour because I was largely profitable on them all. I only wish all of my orders had arrived from last weekend so I could have sold more. The rest will have to be placed on eBay or shipped to buy lists online.

Nykthos, Shrine to Nyx was an easy sell at $8 after I acquired a couple sets at $3.50 each. I could have tried to grind out a couple more bucks on eBay but I was perfectly content with the double-up.

I also had no qualms selling my one copy of Thassa, God of the Sea for $16 and Master of Waves for $14. Raking the cash in from these pick-ups was quite rewarding overall.

Not all Standard cards moved this well, however. The best offer I received on Scavenging Ooze was $8, and this didn’t surprise me. I’ve been watching this card’s price drop slowly on eBay for a couple months now. I’m going to sit on my copies until Modern season, when these should see some significant play. Hopefully this strategy pays off.

I was also unhappy with dealers’ offers on Mutavault. The card is seeing major play in Standard right now and because of this its price has been on the rise. I have seen sets on eBay go from $48 to $60. Yet dealer buy prices remained in the $10 range--a fair price relative to retail prices but disappointingly low nonetheless. I’m going to try and sell my eight copies on eBay for closer to $60 before fees.

One final note: dealers gawked at my foil Abrupt Decays and most of them made a decent offer. In each case I declined in anticipation for some growth come Modern season. The same was true for my one foil Liliana of the Veil.

To say that my Modern cards moved poorly would be a massive understatement. I only moved a few noteworthy Modern cards, and many of the sales were done half-heartedly. In other words I didn’t feel like doing the work on eBay to eek out a couple more bucks and I didn’t want to wait until the summer to sell.

Spellskite fetched me many low offers until finally one dealer offered me $6 each. I know these have some upside potential, but at $6 I felt I was at least profitable and wouldn’t have to sit on this inventory for another eight months. The same went for Inquisition of Kozilek, which was a little easier to sell at $5 due to its reduced play in light of Thoughtseize.

One sale I was pleased to make in Modern was my Celestial Colonnades.

These have been selling on eBay in the $10 range and one vendor offered me $9 each on them! I only hesitated a moment before snap-selling all eight copies I owned. I also decided to move my three foil copies as well, although the buy price was way less exciting. The reason I sold the foils is that I’ve been trying to move these on eBay for weeks at a higher price and I’ve received no takers. Sitting on inventory can be costly at times, and no one has shown any interest in these. So I took the $12 buy price and ran away with solid profit.

Other than these cards, nothing really noteworthy was buy-listing very well. Prices on stuff like Inkmoth Nexus and Birthing Pod were low. I know these are not in high demand at the moment, but it felt reckless to move them for $3 (at a small loss) when I know they will double up come Modern season. The same was true for the other Worldwake man-lands, which sold horribly. I got offers as low as $1 for Raging Ravine, which I simply couldn’t accept.

All in all I was disappointed with how slowly Modern cards were moving, but at the same time I can understand. There’s a lot of uncertainty in Modern right now as the season was postponed significantly and there’s risk of new reprints. I’m happy to sit on these staples for a bit longer.

I did have a few dual lands I acquired cheaply that I was hoping to move. To my surprise, there was one dealer and only one that was aggressively targeting dual lands. They paid me $60 for a NM Savannah and $72 for a SP Tropical Island. This was actually much higher than other dealers, who were in the $45 and $65 range.

This perplexed me. Just a couple months ago at GP Providence I moved my set of 40 duals for very favorable buy prices. Yet last weekend some dealers just turned the pages right past them! Others took them out, examined them closely, and deemed they weren’t worth making offers on. One dealer even told me they were interested in only NM duals or completely beat up duals and nothing in between.

Perhaps these have finally slowed down in price as well? At least some of them have!

I’m not confident this trend is here to stay (in fact it probably isn’t) but it's definitely worth noting. Although still incredibly liquid, dual lands are no longer the best cards to acquire from a buy/sell spread standpoint.

The same goes for Force of Will. In Providence I sold copies between $55 and $60 to some vendors. I had one SP copy to move this time, and it sold for a measly $45. While I’m sure not all Legacy stuff was faring this poorly, I took special note at the recent decline in dual lands and Force of Will. When I asked one vendor why they were paying so much less on these Legacy staples, they told me that with just two Legacy GP’s a year now they aren’t moving these cards nearly as easily. But wasn’t there always just two Legacy GP’s a year? Something seems odd here…

Moving hyped-up Standard cards was easiest at GP Louisville. Perhaps this makes sense since it was a Standard GP. Perhaps at a Modern GP, Modern cards would buy-list better. Either way, I was quite pleased with my total sales. I also had a great time playing some EDH and networking with others in the community.

One final note I’d like to point out--vendors were hard-pressed to keep Hero's Downfall in stock.

Any copies in the room priced at $10 or under were snap-bought, and dealers eventually raised their prices to $15. I did a quick search on eBay and saw that copies were selling in the $10 range there as well. I’m not confident there’s much more upside on this card from here, so I hesitate to acquire any at these prices. But I did want to point out what I felt was the most in-demand Standard card at the GP.

Hopefully I will get to attend a GP and eschew the main event some other time in the future. The experience was a great one, and although I love competition it is so refreshing to take it easy at one of these events. If you haven’t tried this yet, I’d highly recommend it. The casual play and networking opportunities are just as valuable as the information learned from dealer prices.