I want to begin this article by thanking Gervaise for his diligent coverage of PT Theros. His insights gave me the confidence to buy into very profitable opportunities, the largest of which was Nykthos, Shrine to Nyx. Without him I would have stopped at just a couple play sets. But thanks to his tweets along with those of a few others in the QS community, I moved in on a couple additional play sets which banked me solid profits.

I’m also pleased with myself for deciding to sell all of my copies of this legendary land right away. This card continues to decline in price as more copies are opened. I suspect this trend will continue a bit longer and eventually there will be another investing opportunity, perhaps this winter.

I moved all my other Pro Tour pickups as well--Thassa, God of the Sea, Tidebinder Mage, and the one Master of Waves. Solid profits all around.

As I mentioned a couple weeks ago, I also went to GP Louisville and cashed out of a large portion of my trade stock--probably about 50% worth. I moved as much Standard as I profitably could and I managed to sell a few high-dollar items as well. What remains in my binder are some cheaper Theros gods, some Modern staples which haven’t spiked yet, and a smattering of Legacy.

Clearly the above haven’t appreciated much in price yet and I’m hesitant to acquire more. On the other hand, Standard cards have all shot up in virtually instantaneous fashion leaving little profits left to be had on the information that’s currently available.

So what do I do with the proceeds from recent sales?

I’m guessing a number of you are faced with this decision right now. In the comments section of this article I am eager to hear what you’re actively laying out cash for in the next month or two because I’m light on ideas. Here’s what I’ve come up with…

I could continue to acquire Heliod, God of the Suns in the hopes they eventually do find a home. This was the only god not to show up in the Pro Tour Top 8, but that doesn’t necessarily mean Heliod itself is weak. It could just be that the support cards for a white devotion deck aren’t there.

My hesitation here is that I’ve already purchased a good number of these and I’m not interested in taking on more risk on Heliod. This isn’t my speculation style in general.

Nykthos is fairly expensive nowadays, but there could be some upside after the card bottoms out. Problem is this may take months to occur. The same may be the case for the scry lands of Theros. These are definitely on my radar, but I’m not willing to make any cash buys of these at this point.

Not only did I move all my Theros Pro Tour pickups, but I’ve also moved out of most of my Return to Ravnica block plays. Stuff like Supreme Verdict and Detention Sphere paid solid profits once Standard rotated. But it’s about that time to take profits off the table as these reach their Standard peaks. This means more cash available for buying while also having less to speculate on.

Fortunately Standard is still in its infancy, and there will be some more surprises in the next few months. There will be opportunities for quick flips on RTR and M14 cards. But for now I’m not as bullish on any card in particular without there being a catalyst for movement.

Speaking of which, has everyone noticed how much Mutavault has moved lately?

This chart doesn’t do the recent trend justice. Right before the Pro Tour I acquired a couple play sets for around $12 each on eBay. Now I’m seeing eBay listings for play sets selling near $80 and counting.

While some hyped cards from Pro Tour Theros were just flashes in a pan, Mutavault's dominance at the top tables was no fluke. This card is here to stay, and I easily see it breaking $20, even in cash prices. Problem is, even a $22 target sell price leaves little relevant profit with an $18 buy price. So I simply cannot get behind acquiring these actively other than in trades.

It almost seems like Modern has been forgotten these days. Perhaps GP Antwerp will generate excitement for this format, especially since it’s the first major Modern event with Theros included.

My Modern stock moved very inconsistently at GP Louisville--many vendors realize there will be reduced demand for Modern stock for months. They are uninterested in sitting on hundreds of Inkmoth Nexus and Birthing Pod for half a year. Let’s face it. While there has been slight growth in these Modern staples, their price trajectories have been boring at best and uninspiring at worst.

Compare that to flashy stuff like Daybreak Coronet, which for some reason became all the rage in a day.

I know Future Sight was opened less and it was before the mythic rare era, etc. etc. That’s fine. The fact of the matter is that Daybreak Coronet, along with others like Fulminator Mage and Chord of Calling, all shot up hundreds of percent in short time and even maintained their higher prices.

Birthing Pod and Inkmoth Nexus are two heavily played Modern cards which have barely doubled in a year. Even though there are more quantities, these will eventually have their moments. I own a handful of these two cards already, but I may seek out more with my newly generated cash.

Beyond Modern I have little interest. Since selling out of Legacy, I have made the conscious decision to de-prioritize speculation in that format. Keeping up with so many formats is time consuming. Frankly I don’t have the time to dedicate to reading additional tournament summaries every weekend.

If there’s something truly amazing I should be aware of, the QS forums will alert me to it. I know some new Commander cards are worth keeping an eye on. But other than these, I haven’t heard buzz on Legacy stuff in a while.

I am already sitting on a fair number of Inkmoth Nexus, though I could probably use some more Birthing Pods. I also still believe in Scars of Mirrodin fast lands-–these should finally see a bump come next Modern PTQ season if all goes according to plan.

Oh, and of course I still have all my shocklands.

The reason I still have all these is because I still have a sound thesis that explains why they will rise in price in the future. The Modern PTQ format will roll around before you know it, and all these new Magic players will want their hands on all these cards that came out before they started playing. That’s when we can ring the register and take profits.

In the meantime, I can think of little else worth acquiring with my cash. In fact, I’ve been gradually taking funds out of my MTG Speculation account (i.e. PayPal) and transferring them into a Fidelity investment account. In Fidelity I’ve been purchasing safer stocks that I can sit on for years in the hopes that these proceeds fund the majority of my 20-month-old’s college education. It’s less exciting to many in the QS community, but the stock market has a pedigree of consistent returns in the long term.

After all, there are not many Magic cards that have a chart like Berkshire Hathaway Stock while also having plenty of upside. 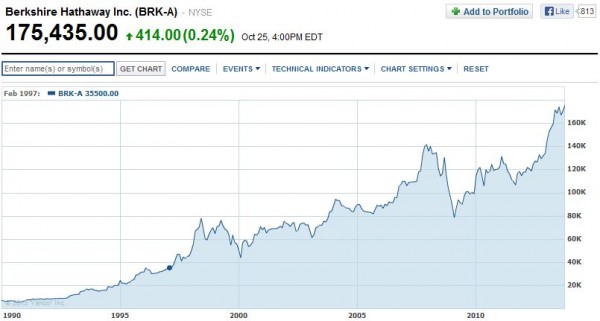 Maybe Underground Sea? I don’t know–-it feels like this card has stagnated lately. But perhaps it’s just establishing a new price floor before it goes even higher? Even though Berkshire Hathaway’s stock is $175,000 a share this is supported by the holdings that the company maintains. Underground Sea’s value is buoyed by demand from a group of hobbyists. Which do you think is more likely to last another 20 years?

That’s why I generally play it safe--I’m doing this speculation with a purpose. Your purpose is likely different. Based on your own needs and desires, you will make investment decisions accordingly. If you have the time to profit in every opportunity in Magic right now then have at it! But if you have some time restrictions like I do, and you see no obvious opportunities at the moment, then this could be a good time to move cash into other areas of your life. This balance has worked well for me thus far.

13 thoughts on “Insider: Sitting On My Hands”