Despite nonstop coverage throughout the weekend, I only managed to spend a short bit of time watching the Legacy Grand Prix. But it only took an hour of watching people play dual lands and cast Ad Nauseam before the nostalgia kicked in.

It’s been 133 days since I sold my Legacy collection at GP Providence, and starting this weekend I officially miss the format. Legacy continues to be both the most exciting and expensive GP format, with decks clocking in well over $2,000 in many cases. And after watching some of the pros rock black-bordered duals and foiled-out decks, it’s obvious this number can easily increase in an order of magnitude if the deck pilot so desires.

But the high cost of entry for this thrilling format is both a blessing and a curse. On the plus side, the rapid increase in Legacy’s popularity has generated a lot of value for players and LGS’s around the world. I myself was absolutely astounded at the cash I was able to generate by selling out of Legacy--a decision I refuse to regret.

But on the negative side, Wizards has gradually reduced their support of this aging format, and now the number of Legacy Grand Prix is being reduced from three (one in Europe, two in the US) to two (one each in Europe and the US). Let’s face it--if you’re not in Paris for Valentine’s day or in New Jersey one year from now, you’re not playing in a Legacy GP next year. And since there are no Legacy Pro Tours or PTQ’s, don’t expect to be doing much premier play outside these two events.

No need to panic however. After all, for the eternal fix we all frequently seek out, there’s always six Modern GP’s and a full Modern PTQ and Pro Tour season next year! That should be awesome, right?

A Loud and Clear Message

Wizards of the Coast has identified their priorities loudly and clearly. Legacy is becoming old news while Modern becomes a center of focus. After all, Modern has loads of income potential since the format involves many newer cards. The ability to reprint everything via a Masters Edition is also a brilliant revenue stream. Quite frankly, a Legacy Masters series would be quite lame without dual lands and many other Reserve List staples.

It’s important to note that Legacy will not cease to exist altogether. As long as Star City Games continues to support Legacy on their circuit, the format will remain healthy and card prices sustainably high. But if Legacy and Modern were two horses in a race, I’d wager my money on the Modern one.

Hence my theme for this article--which format should we invest in?

This rapid rise in price is not uncommon for Legacy staples. The results were spectacular profits for anyone who entered the format when it began to heat up back in 2009. I was especially fortunate in that the first deck I pursued when I entered Legacy four years ago was AnT. This means I acquired LED’s for $20 and Underground Seas for between $30 and $40. Profits for everybody!!!

Times may be changing. While there are always natural fluctuations for Legacy cards depending on the season, recent trends still seem concerning. Take a look at the mtgstocks.com chart for LED now.

The drop is substantial here. It feels like the card tried to break into a new price tear ($99.99 retail) but failed. The result: a drop down to Spring 2013 prices, with trajectory still in the negative direction.

This is not unique to this niche Legacy card.

In the Force of Will chart above we see the rapid rise and decline of a major Legacy staple. After a summer of blissfully high prices, this card has also dropped back down to April 2013 pricing.

My prediction: Legacy has become fully integrated and saturated. In other words, it feels like everyone wanting to play Legacy is now on board. Newcomers are opting to eschew this expensive format in favor of a less expensive and intimidating one: Modern.

Legacy prices may stagnate as a result. We will continue to see seasonal price fluctuations, and there will be a slow upward trend. But returns on Legacy investments may be much more modest. I don’t expect 100% gains on such cards as Force of Will any longer.

In other words, your money could work harder for you elsewhere.

Not quite. Without the Reserved List, there will always be drawbacks to investing deeply in Modern. Wizards could choose to reprint key staples as they see fit.

Fortunately the reaction time for such an endeavor is quite lengthy. Therefore Modern still offers a multitude of profitable opportunities in the future. With triple the number of Grand Prix and a PTQ schedule, the demand for Modern cards will rapidly rise while the demand for Legacy cards will become cyclical at best, retracting at worst.

This leads me to a fundamental point worth stating explicitly. No matter how grand the returns have been for an investment, it is always wise to consider future upside when allocating funds. Just because you made 200% gains on an investment before does not mean it’s a superior investment today. Opportunity cost is a real thing.

A real life example I’m facing today is an investment I made in Utilities in the form of an Externally Traded Fund (ETF).

During the first half of this year the fund performed exceptionally well, beating the market when the solid 4% dividend is added into the returns. I continued to ride this train into the second half of 2013 only to be somewhat disappointed by the stagnated numbers. 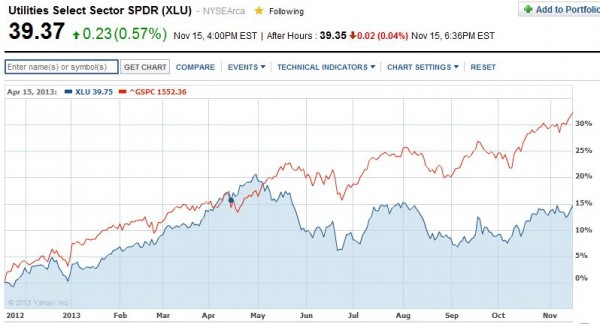 It turns out this investment was superior to the average market in early 2013 but the money was better off in other places during the back half. Just because I am up 19% on this fund this year (15% in gains + 4% dividend) doesn’t mean this was a wise investment. In fact, if I had placed more money into other stocks I already owned I would have been better off by a significant amount.

This same lesson is applicable in Magic. Many players grasp their Legacy staples tightly to their chest insisting on a continuous uptrend. You know what?--they’re right. Legacy staples like dual lands will continuously rise. But they will most assuredly be like the blue curve in the chart above while Modern staples resemble the red curve as long as they’re not reprinted.

In other words, my longing to play Legacy does not outweigh the fact that I’ll make more money from Modern in 2014. I have no regrets in my decision because I believe it will be the most lucrative one. Since my primary goal of this hobby is to make profit for my son’s college education, I feel I am making the optimal choices.

A Small Aside – Contradictions

As I've learned more about investing, I’ve uncovered a contradiction in one of my recent decisions. While I emphasize above the importance of opportunity cost and understanding goals, I also encourage reduction of risk. This seems contradictory because reducing risk often means less potential reward.

My investment in Innistrad booster boxes is a prime example. Downside on this investment is small, and I will eventually profit. But it may take years. As long as sellers continue to list these for less than what I paid, I’ll have to play the waiting game. 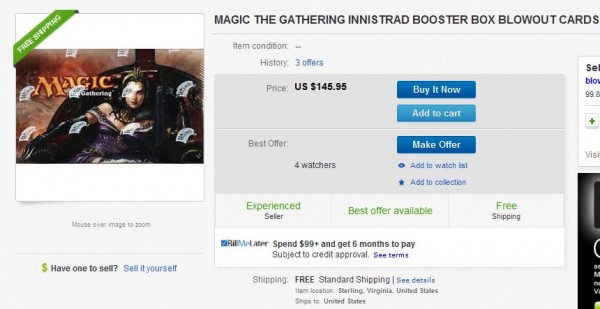 Clearly I did not place opportunity cost at the forefront of my mind while deciding on this investment. The funds I have sunk in INN boxes could have been much better spent in the likes of Modern staples or better yet, Wall Street.

But hindsight is 20/20 and the best I can do is learn from the past and move on. Long ahead from today, I believe there is still enough upside on this investment to justify holding. I could sell for a loss and have access to more cash, but I cannot identify an alternative investment opportunity that justifies such a move. I’ll be content to stay put, especially since the fees from selling now would lead me to a 15-20% loss on this investment.

Life’s All About Choices

It is absolutely critical that you decide what you are seeking to gain from MTG finance. If you’re in it for the profits like I am, then you may want to consider trimming down on Legacy during the next seasonal price spike so that you can focus on the growing Modern format.

On the other hand if you still enjoy playing Legacy on a local level I cannot fault you for holding. Just make sure you are conscious about the opportunity cost of such a decision.

The more I think about MTG finance and compare it to real life investing, the more decisions I’ve come to regret from the past. My priorities were not well defined in my mind, and this led to sub-optimal plays. All I can do now is learn from these mistakes and put my best foot forward next time around.

I strongly encourage you all to identify what your goals are with this hobby and then make decisions in accordance with these goals. You may surprise yourself with your decisions moving forward. I know I did.

16 thoughts on “Insider: The Temptations of Legacy”