Note: Last week I broke my hand on the pinky side. My typing is much slower as a result and so my next few articles will be a bit shorter as I recover. Apologies for the inconvenience.

This week I am going to take a close look at the top mtgstocks.com interests from last week and classify which ones I feel are worth watching and which ones are likely to be artificial spikes. I know the weekly Top Winners column on mtgstocks.com is unavailable this week due to the holidays. This is of course understandable, but it doesn’t mean nothing noteworthy happened in the land of MTG finance last week. 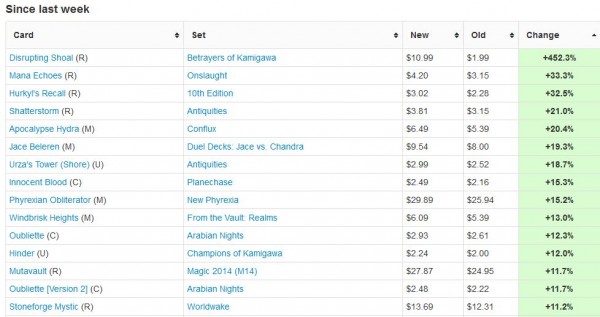 The top mover this past week comes as no surprise to our insiders--the forums were definitely on top of this one after it put up decent results on MTGO along with Travis Woo’s endorsement. I only wish I had bought in on December 12th when member liucoke upped the thread. So much money could have been made!

My recommendation: Sell. Even if the card has potential, most of the upside is gone now at this high price. In order to go even higher, this card would have to make waves at premier events or at least PTQs.

Since these are still months away, you risk missing out on future spikes if you decide to hold. I’d take the profit and run--this spike is not likely to last.

I have seen this card show up as an interest numerous times now and I’ve continuously ignored it. Perhaps it’s time to pay attention. Cheap copies of this Onslaught rare are gone.

This card doesn’t even show up in the QS forums--I have to imagine its a casual slash Commander play of some sort but I’m honestly not sure. Perhaps the reintroduction of slivers spiked interest in this tribal-themed card. The price increase did start once M14 was released.

Either way, I don’t think this jump is artificial. I believe there is genuine interest in the card among the casual crowd. I can’t advocate going ultra deep here if my assessment is accurate, but trading for these could prove profitable in the long term.

This spike may have been driven by the Brainstorm Brewery cast. While I admit having these in black border is nice, I’m not sure if the spike in Tenth Edition copies is sustainable. Foil versions definitely deserve the premium, but I can’t get behind nonfoils at this higher price.

If you’re a gambler, feel free to hold into Modern season. But if you’re conservative like me, sell your Tenth Edition copies, buy a set of Fourth Edition versions for a buck and walk away profitable.

It is interesting to see Phyrexian Obliterator remain resilient at this new, higher price point. I fully expected a large retreat in price, but buyers have kept up interest.

The ceiling on this card is likely $30--at least before Modern season arrives. I have had two SP copies on eBay listed at $24.99 for a week now with no buyers. Someone is buying these up, and I just wish they’d buy my copies already. I see greater opportunities elsewhere in the coming months.

Hinder had caught my eye lately. This popular Commander uncommon is becoming scarce as it ages further. Looks like this is definitely a card to look for in bulk boxes or when purchasing collections.

Finally, it appears Stoneforge Mystic is finally on the move. It’s about time. This card has been a Legacy staple for years, and the Event Deck printing can only keep the value down for so long.

Buylists haven’t caught up yet with this recent run, but it should be a matter of time. Watch these closely. They will hit $20 before you know it, and reprints are unlikely. She makes little sense in Standard without much equipment and she’s banned in Modern. She could appear in a hypothetical Legacy Masters and that’s about it. Safe buy.

Hand is getting stiff so I am going to call it quits here. Sorry about the lack of Sigbits these next couple weeks.

Hope everyone has a terrific holiday season!

5 thoughts on “Insider: Interests of Note for Christmas Week”