Standard PTQ season ends on March 9. After this, there won’t be any Standard PTQs until December of this year. How much can the Star City Games Open Series and Friday Night Magic prop up Standard card prices? We’re about to find out.

For my part, I’m looking to sell out of Standard. Even though I mostly draft, I usually maintain a Standard deck or two, just in case there’s a PTQ or IQ I want to play in. But the chance to play an event in a format I don’t playtest or enjoy is not worth the potential of losing money to significant price drops once Sealed PTQ season begins.

If you play Standard, it’s probably worth holding onto your cards to play with until the season ends, but if you’ve got copies of extra staples or a spare deck in reserve, it might be wise to start outing them. The SCG Open Series and FNM will probably keep your cards from becoming worthless, but do you really want to take the risk? I’m selling out completely. Well, almost.

Snapcaster Mage, Liliana of the Veil, and Geist of Saint Traft were on everyone’s radars at rotation, but their price floors weren’t as low as many expected. The playerbase at large is becoming more savvy regarding MTG finance, and the expansion of the Modern format means FNM players are not just looking to unload rotated Standard staples for whatever they can get.

When was the ideal time to pick up these staples? Interestingly, the answer is different for each card. Take a look (all graphs courtesy of MTGGoldfish): 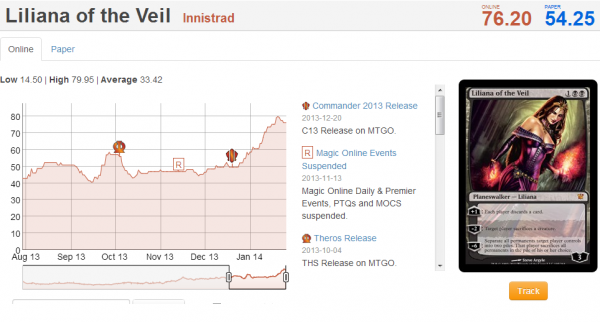 The floor for Lili was at the release of M13, a full year before it rotated from Standard. After that, the card steadily increased to its current price, not even seeing a dip at rotation. 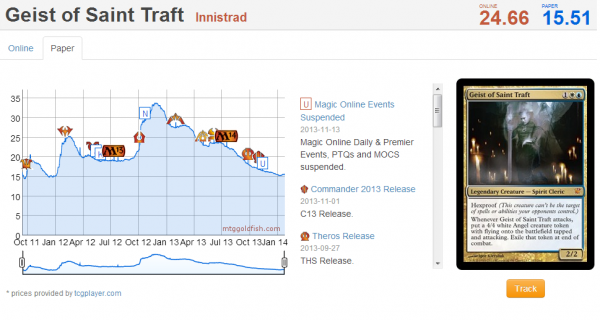 Geist, on the other hand, has been steadily declining since before rotation, and is actually at its floor now. This may be partially due to True-Name Nemesis taking its spot in many Legacy lists. The card is still extremely powerful and legal in Modern, so expect a rebound at some point in the not-too-distant future. 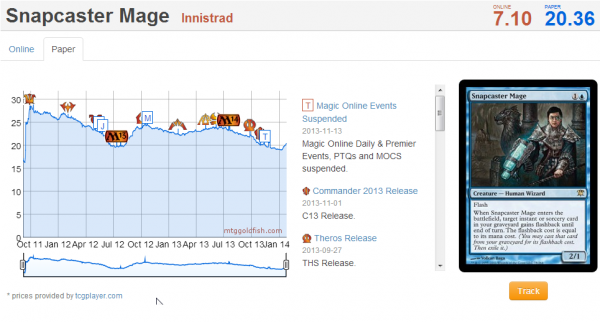 Remarkably, the time to buy in to Snapcaster was way back during Innistrad preorders. It’s a rare card that consistently stays above its preorder price, but we have found one here. Its post-rotation floor seems to have just passed us by, with the card seeing a small incline in the last several days.

Applying the Past to Now

What current cards in Standard see Modern (or Legacy) play? And which of them are due to rotate this year? Here are the most notable:

We’re all going to be looking to pick these cards up as rotation approaches, but will that be the right time? 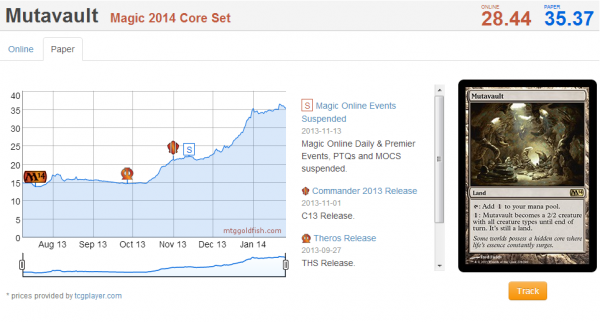 Okay, with Mutavault, it’s probably wise to sell your copies now. The card is at its ceiling and is seeing play in the most dominating decks of the current format—it has to drop when it stops seeing play in Standard. But keep in mind that this was a $40 card before it was reprinted, M14 was not a very popular set, and Modern Merfolk is becoming more and more popular. The next floor on this card may not be the $15 we saw several months ago. I’ll be keeping a close eye on how Mutavault performs over the next year, because if it drops far enough, all of the factors are right to make this a huge gainer after rotation. 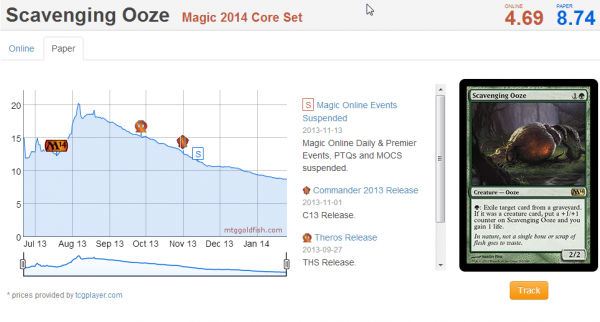 Here’s a very powerful utility card that is seeing no Standard play and is at its all-time lowest price. While the card may drop another dollar or two, it has a Legacy pedigree and will almost certainly be worth well more than it is now at this time next year. If you wait for rotation with this one, you’ll probably have missed the boat. Start snagging these out of trade binders soon. 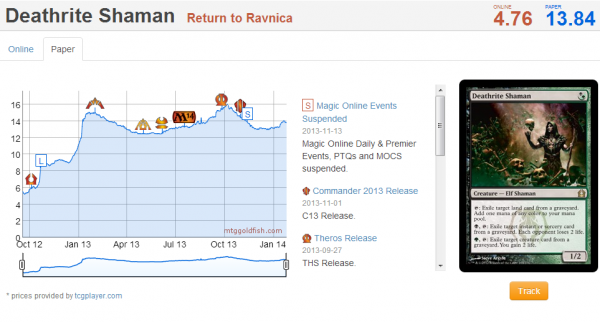 Deathrite Shaman sees virtually no Standard play but is still only a couple dollars off its all-time high. Due to its price being based mainly on eternal formats, it will likely see little to no dip at rotation. Being a rare from a large fall set is a downside, but the design of the RTR block means that RTR rares aren’t quite as risky a venture as those from Theros or Innistrad. My biggest concern with Deathrite is that it will earn a ban in Legacy or Modern, but is that really likely? I definitely see it discussed on Twitter and elsewhere, but I don’t think we’ve reached the level of saturation to make the card ban-worthy. 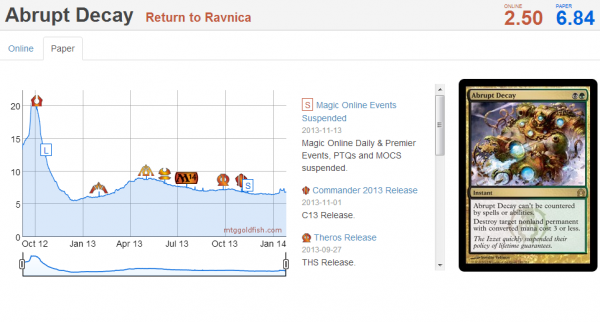 This has been on the QS and BSB radar for quite a while, but this chart sure makes the card look like it’s found a stable price. I’m sure it will eventually start growing, but I’m not placing a heavy priority on picking these up for now. This might be one that is indeed best to acquire around rotation, but we’ll see what happens in the next several months. 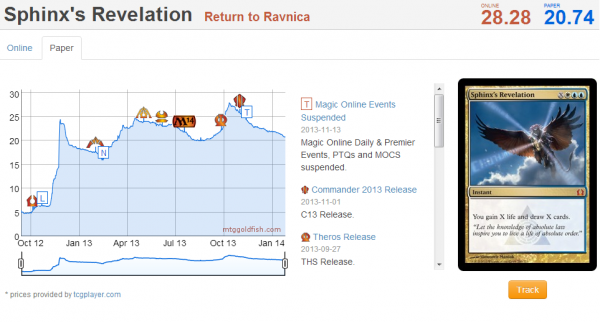 Besides Mutavault, Sphinx's Revelation is the card on this list with a price most influenced by Standard play. The card does see play as a one- or two-of in Modern control decks, so it will be worth targeting when the price is right. Given how much it dominated last year’s Standard format, price memory may force us to wait until post-rotation for this particular pickup. 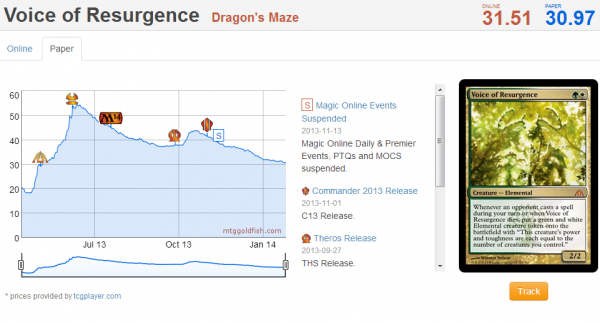 This card is seeing virtually no Standard play but is still $30. Why? Well, partly because of Modern, but mostly because of being from Dragon’s Maze. With nothing from the set seeing play or worth anything, something has to hold value, and this is it. If GW starts seeing a bunch of Standard play, we could see Voice spike in Standard, and if that happens, it will likely never be cheaper than it is now. If GW doesn’t see play, though, we could see this drop as low as $20 before turning around. Don’t expect to get a rotation discount on this one—keep an eye out for the floor and don’t hesitate to get your copies when we reach it.

As you can see, this is a diverse group of cards with a number of factors influencing their prices. Scavenging Ooze, Deathrite Shaman, and Voice of Resurgence are all seeing basically no Standard play but have maintained value despite this. Each, however, is close to its floor, so it’s important to stay aware of the trends with these cards. There will come a time to pick them up, and after that time has passed, we’ll be kicking ourselves if we missed it.

On the other hand, Mutavault and Sphinx's Revelation are seeing more Standard play than they are Modern. These are powerful cards with a place in the larger format, but we can expect their prices to drop when they are no longer relevant in Standard. After this drop-off, though, Modern play should buoy prices back up to or above previous levels.

Complicating all of this is the fact that Modern PTQ season goes from June 7 to August 24. This is different from last year, and I don’t think I can understate how much relevance I believe it will have. If a rotating card blows up in Modern during the summer, do you really expect rotation to cause any kind of price reduction?

Based on what we saw with Liliana of the Veil, the current MTG economy fueled by an influx of new speculators, and the change in PTQ format seasons, I expect we’ll see some of the cards I listed in this article go higher upon rotation rather than lower. The time to pick up many—or all—of these cards is going to be earlier than in previous years. Keep an eye on these cards over the next couple months, and keep in mind that the time to pick them up might be now.

I obviously have some ideas about how the changes this year will impact the MTG finance community, but I'm just one man. What do you think? Do you have any insights I may have missed here? Please share in the comments below, or hit me up on Twitter @dbro37.