Deathrite Shaman is banned. Bitterblossom and Wild Nacatl are unbanned.

So, that happened. I’m writing this the morning following the DCI banned and restricted list announcement, and Bitterblossom is currently averaging $87.49 on TCGplayer. I shouldn’t have to tell you this, but just in case, you should be selling into this hype. Sell hard. Want to play with Bitterblossom? Sell anyway. Make some money and buy back in when the hype has died down.

Looking at the Data

We don’t have a lot of recent precedent for unbannings, but take a look at the trajectory for our two most recent ones: 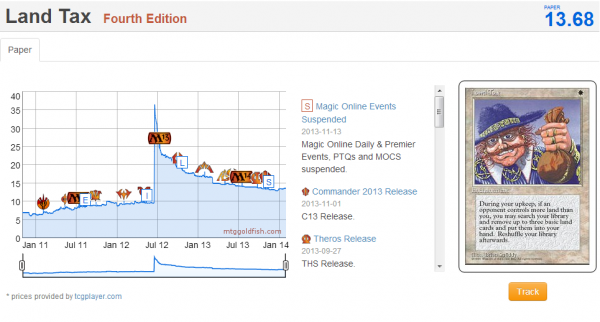 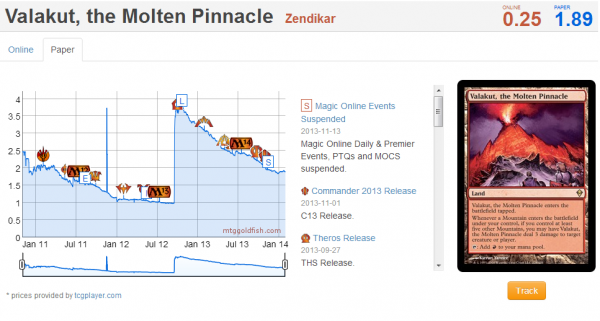 Land Tax was unbanned in Legacy during June 2012 and Valakut, the Molten Pinnacle was unbanned from Modern a few months later. Both cards spiked significantly upon the announcement, and both cards have since come down quite a bit from their high points. It is worth noting, however, that the current price for each of these cards exceeds its pre-unban levels.

So if it follows a similar trajectory, we can expect Bitterblossom to be somewhere in the realm of $50 after the hype has died down. This is, of course, assuming that it doesn’t take over the format. Neither Valakut nor Land Tax did a whole lot after being unbanned, but if either had, our charts above would tell a very different story. Still, it’s hard to imagine Bitterblossom reaching and holding $100, even if it becomes the de facto strategy in Modern.

And what about the Modern event deck that was recently announced? The deck that includes five double-sided tokens? From a budget perspective, a black-white token deck already seemed like a reasonable option for this product, but with this unbanning, the possibility now seems even more likely. I wouldn’t be surprised to see a copy of Bitterblossom and a copy of Marsh Flats in the deck, which would obviously not do wonders for the ceiling on either card.

Sell your Bitterblossoms. The card is obviously insane, but Wizards isn’t going to make a move like this without ensuring card availability for an inevitably popular strategy. There’s a reprint coming, probably in the event deck. Just like always, you should be selling into this hype.

Mistbind Clique is averaging $29.77 on TCGplayer, up from about $4 yesterday. This B&R list update has shaken things up for more than just three cards, and the real trick is going to be identifying what’s poised to spike next.

Death of a Shaman

I’m highly relieved Birthing Pod avoided the ban hammer, but the banning of Deathrite Shaman certainly has some impact on the deck. Both Melira and Kiki Pod decks played Shaman for mana ramp and disruption. Without the card, we’ll be seeing more copies of Noble Hierarch and Birds of Paradise in these lists. Given the extreme number of printings Birds has seen, Hierarch seems like the dork with the higher upside, at least until a place to reprint it is found. The high buy-in price makes me skeptical on making much money, but getting a playset sooner rather than later will favor Modern players looking to play one of these decks. It’s already gone up in the few hours since the announcement.

Deathrite Shaman was also a powerful tool against Melira Pod, so even though the deck lost something, it also gained some advantage in a few matchups. Expect to see Scavenging Ooze pick up the graveyard-hating slack in the absence of Shaman. In my eyes, Ooze’s stock just rose manyfold with this banning. Also released from DRS-purgatory is Knight of the Reliquary, which largely stopped seeing play when Shaman was printed. The Modern Masters printing drove the price down on this one, so there could be opportunity here. Both of these cards are looking mighty attractive in the wake of Shaman’s demise.

I haven’t decided what to do with my playset of Deathrite Shaman yet. On one hand, the card still sees play in Legacy. On the other hand, the demand was just cut in half. Shaman probably grows in the long-term, but whether you want to wait for that to happen is a personal decision, as it will probably dip further than we expected at rotation. I’ll see what I can buylist it at in the next few days and decide from there. My guess is that I’ll probably just hold my copies.

If Faeries becomes a tier-one Modern deck, Abrupt Decay could be the go-to answer to beating Bitterblossom. If things shape up this way, what are Faerie players to do? One answer is to play Scion of Oona, which is still only around $3. The Modern Masters reprinting certainly hurts the ceiling on this card, but if Mistbind Clique can grow 700% in one evening, Scion should at least be able to double up.

So Abrupt Decay is trumped by Scion of Oona. If you can’t kill the source, maybe you just kill the dudes. You know what kills 1/1 fliers really well? Thundermaw Hellkite. This card has already seen some Modern play, but should be even better with Bitterblossom in the format. And the way you’ll get it down through Fae counter magic? Cavern of Souls.

We’ve been waiting a while, but maybe this unbanning is what will finally push Darkslick Shores into profitable territory. There’s still time to buy some extras or just a playset before this happens. If Fae does push Shores up, expect that to have an impact on all the other Scars fast lands increasing. That would would be quite welcome for many of us here on QS!

The unbanning of Wild Nacatl will inevitably lead to more Zoo decks in the format, which could bode well for Geist of Saint Traft. Before the banning, Tribal Flames Zoo seemed to be one of the most powerful aggro strategies in Modern. Geist fits into the deck well and is near its price floor. The aforementioned Knight of the Reliquary is also good in this deck, which points even more toward it being a good buy.

Other options in Zoo that could see a bump are Goblin Guide and Grim Lavamancer. Goblin Guide is one of the most aggressive creatures ever printed and sees Legacy play. There was a promo printing, but that hasn’t kept it from slowly creeping up over the last few years. Lavamancer sees play in all kinds of decks and has been recently depressed by Deathrite Shaman. Removing its biggest competitor from the format and adding a deck for it can only do good things.

Finally, I’m very much hoping this will increase demand for shock lands. If Domain Zoo is the way to go in this brave new format, mana bases will be strained and shock lands will be needed. Temple Garden, Stomping Ground, and Sacred Foundry seem like the most obvious plays here.

This B&R list update is a pretty major change to the Modern format—definitely the most impactful we’ve had in a while. I’ve outlined a few cards that might see growth in response to this update, but as a QS insider, you probably have your own ideas about what might spike. Feel free to offer your insights in the comments below. See you next time, and thanks for reading!

3 thoughts on “Insider: Banned and Unbanned”