With consistent opportunities in Modern, I haven’t been paying much attention to Standard finance in the last several months. Individual specs are too volatile, sometimes short-lived, and often don’t hit even when all the evidence says they should. But I’ve been observing a larger, longer-term trend that is applicable to heavy drafters, traders, and folks who open lots of sealed product.

My hypothesis today is that with a holistic, complete-set approach, we can determine general guidelines for acquiring and selling current Standard-legal cards on a yearly schedule. To identify any patterns, we’ll take a look at data pulled from MTG Goldfish for the last three blocks. If your time to devote to MTG finance is limited, today’s article will help you make the most of the time that you can commit.

Take a look at the total set value for each of the last three large fall sets. The dates are limited to only the set’s time in Standard. 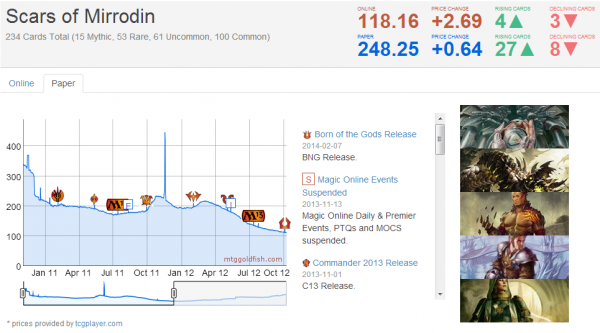 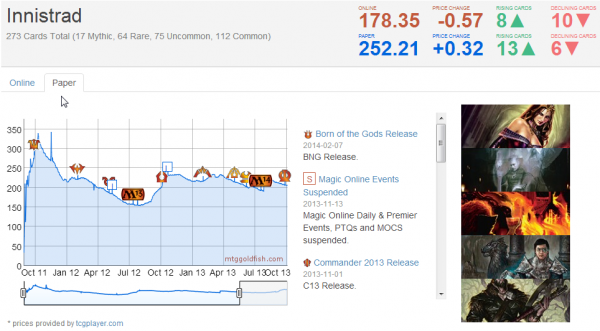 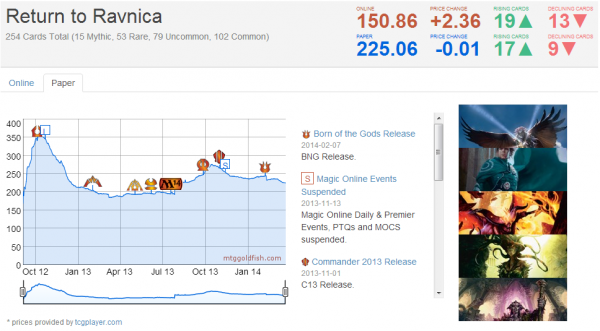 To me, there are three interesting pieces of information that each of these graphs share:

A very hands-off, big-picture approach dictates the following yearly pattern for Standard cards: sell whatever you get at a set’s release, start holding all of the current set’s cards during the subsequent months, acquire any additional cards around the time of the core set release, then sell out completely after the following year’s fall release.

Like I said, this is a big-picture approach. Individual analysis of particular cards may lead you to believe buying and selling at different times is the best strategy. If you have strong reasoning for breaking these patterns, you absolutely should! I’m not trying to suggest that every card in every fall set follows this trajectory. Instead, I’m merely suggesting that if your interest in Standard is secondary to other MTG finance opportunities, these are some good rules of thumb to allow you to have a hand in the format without spending a large amount of time studying it.

Here are the graphs for the same set's time periods on MTGO: 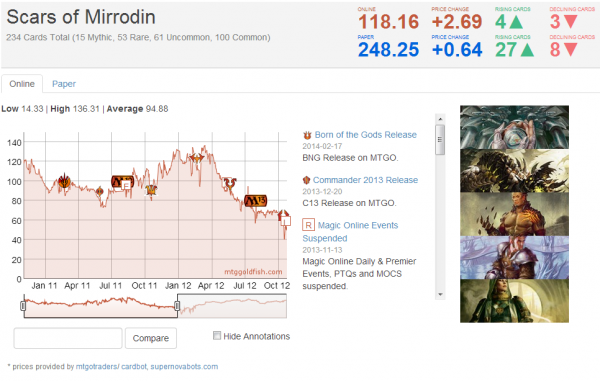 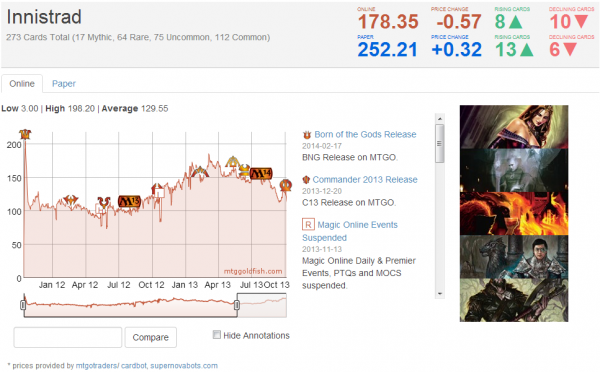 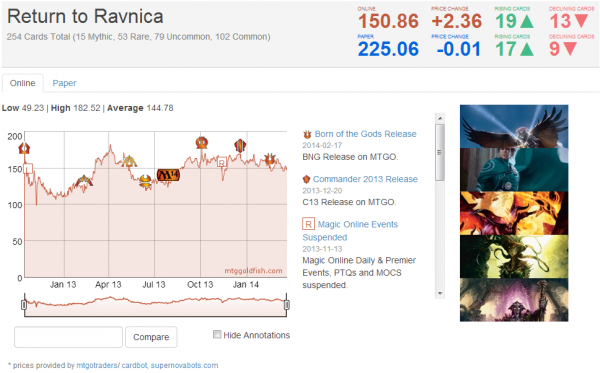 Prices are much more volatile on MTGO. But although there are some additional peaks and valleys, the basic pattern remains the same.

I’m hardly an MTGO finance expert, but I do draft a lot online. I first started drafting online during Innistrad, but only started doing it very frequently during Return to Ravnica. At the time, my idea was to draft complete sets and redeem them, since I’m more comfortable working with paper cards from a financial perspective. But I never did open a Sphinx's Revelation, and by the time Theros came out, MTGO prices on RTR block cards were very high. I ended up just selling out for tickets, and today, I’ve done over 80 Theros block drafts without having put any money into the system since Gatecrash.

I’m not at all comfortable describing myself as “infinite,” but can say that I’ve played more than $1000 worth of drafts in the last six months for less than a couple hundred dollars…that I spent in early 2013. I attribute this to all of the RTR-block cards I held for a year, and this will be my strategy moving forward. I regretfully have sold a fair amount of Theros cards, but I am holding everything else, especially mythics, for sale during next year’s Standard.

I won’t really know for a few years if this is a viable long-term plan, but the last several months have felt like a breakthrough in my attempts to play for free, so I’m sharing this strategy in hopes that you can benefit, as well. The cool thing is that I made zero speculative purchases to fuel my play—everything I sell is something I’ve drafted. The downside, of course, is that if you’re holding cards for a year, that first year will require some real-money investment to play enough drafts to fuel future years. But if this continues to work out, that first year is the only time that significant money needs to be put down.

I’ve been putting off a long-standing goal to learn the MTGO marketplace, but just because I’m not yet making speculative purchases on the platform doesn’t mean I’m not thinking about things in a financial sense. Even if there are areas of the game (MTGO vs. paper, particular formats, etc.) that MTG finance is not your priority, you can still make smart decisions that benefit you financially. That’s what I’m attempting to do on MTGO, and as I observe and learn more about the platform, my play will be cheaper and I may even make a few bucks. I’ll keep you updated of any strategies that start working.

A Few More Graphs for Your Amusement

I’ve made the points I need to make today. Winter and spring sets largely follow the same trends, so I don’t feel the need to go into further analysis on each of them. However, for your enjoyment, I’m copying the pertinent graphs below. If you have any questions or comments, please let me know below or on Twitter, @dbro37. 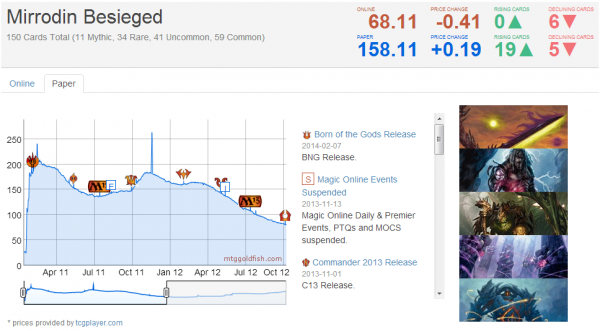 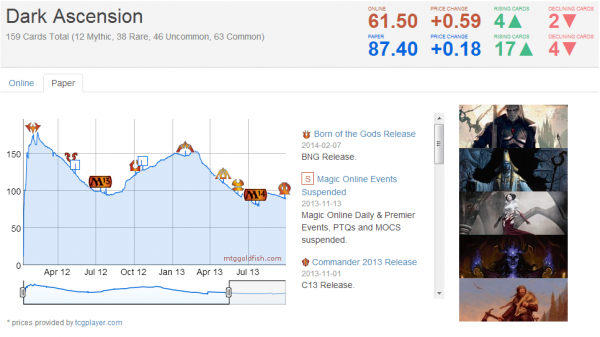 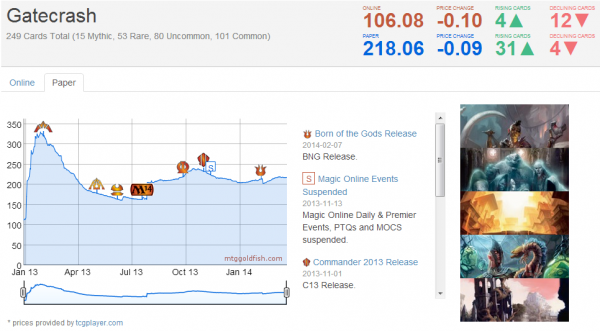 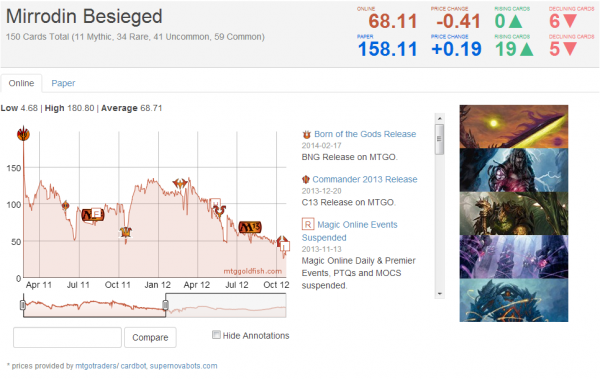 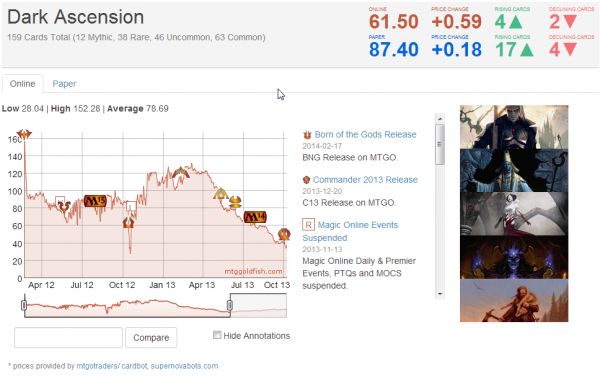 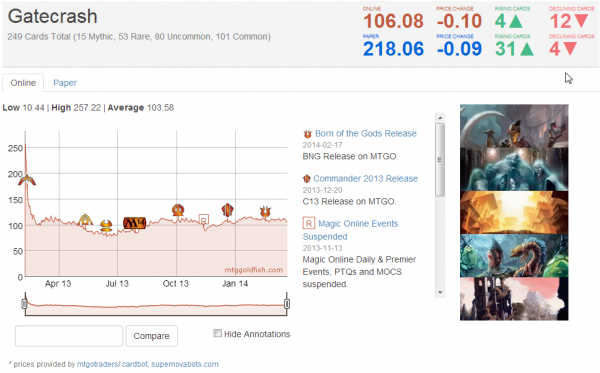 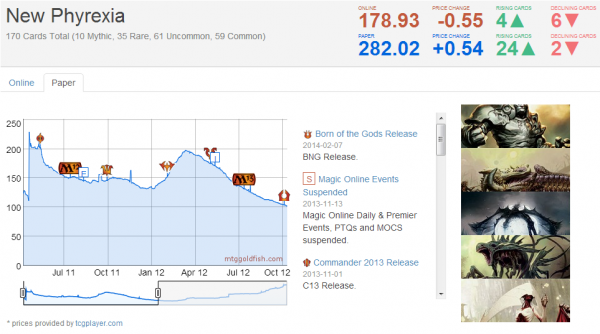 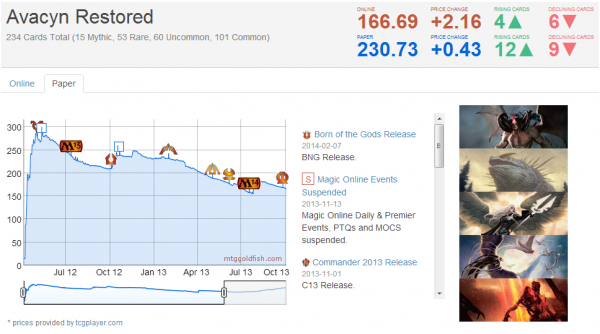 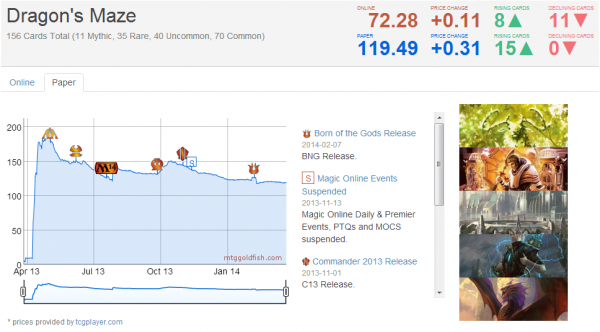 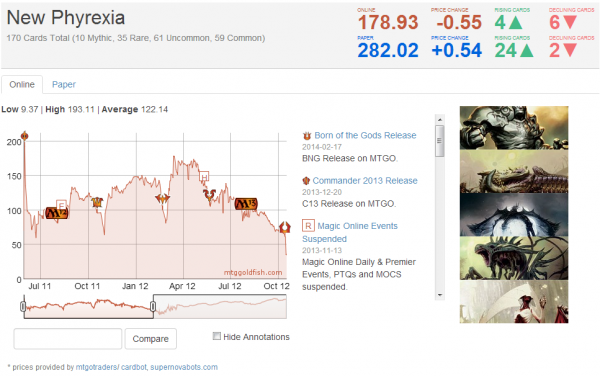 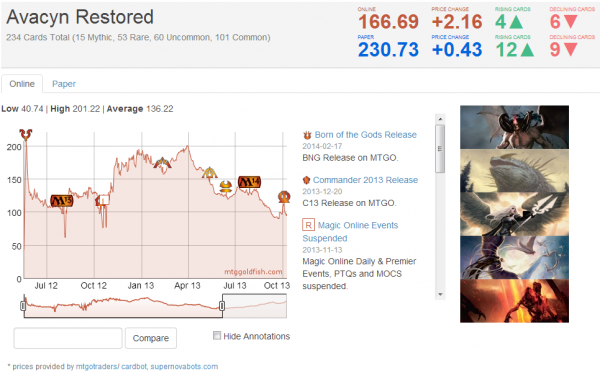 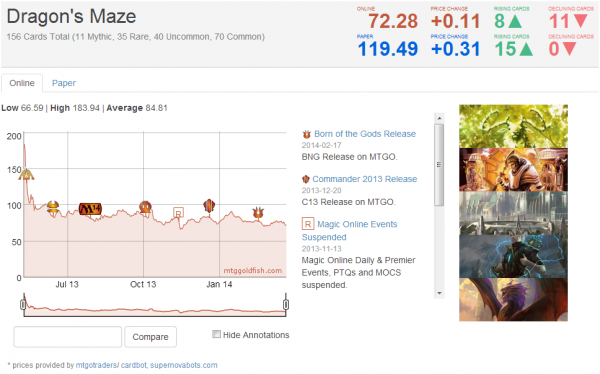