Last weekend I had the pleasure of attending my seventh Grand Prix, in Cincinnati, OH. If the format was anything but Standard I may have participated in the main event. But since the format was Standard and this particular Standard format bores me to oblivion, I decided to focus on selling to dealers, trading and networking.

Mission accomplished. Well, sort of. While I had some specific cash goals in mind for the GP I ended up falling a little short. Allow me to explain.

Star City Games Does It Again

Star City Games strives to maintain sufficient stock of all relevant Magic cards. When they struggle to keep certain cards in stock they will increase their buy and sell prices to reflect these market changes. Sometimes they can be a bit more…dramatic with their price hikes.

Some recent developments triggered by Star City Games influenced me towards trading into a few specific cards due to their recent price increases. For those unaware, SCG just increased their buy and sell prices on three dual lands: Volcanic Island, Underground Sea and Plateau.

What possessed the world’s largest MTG retailer to make this price adjustment? When I spoke with the buyers last weekend, they told me it was simply due to the fact that they couldn’t keep these duals in stock for long. So they resorted to price adjustments.

This seemed reasonable to me, but it did alter my strategy some. Instead of taking cash on a few buylist sales to Star City Games (I’ll come back to this) I went with the trade-in option.

This netted me an additional 25% in value from my sales, and enabled me to purchase a few dual lands which haven’t spiked yet. But if you think these are the only three dual lands that will receive the price bump treatment you would be a bit too narrow-minded. Other duals will follow soon enough, and I wanted a position in these to capitalize on the recent growth.

Other Bumps From SCG

While I can fully appreciate SCG’s motivation for bumping dual lands, I still question two other price adjustments they made recently: Ancient Tomb and promo Gitaxian Probe. 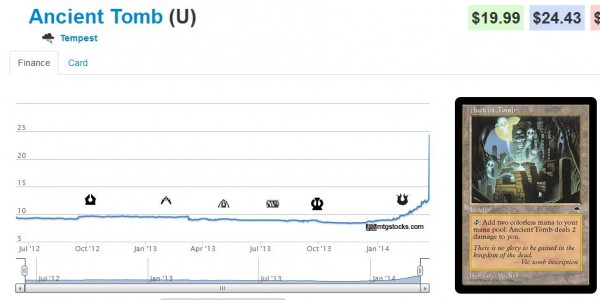 By increasing their buy and sell prices on Ancient Tomb to $15 and $29.99, respectively, Star City Games has strong-armed a 100% spike in value of this Tempest uncommon. Our very own Jason Alt has been on this spec for months now and I followed suit when I read his rationale. But neither of us expected this behavior. When I asked the SCG vendor their rationale for doubling this card’s price so suddenly when dozens of cheaper copies were available online, I simply received a shrug in reply.

In any event when I saw this price hike (thanks to Nick Becvar @Becvar) I went to Card Shark, placed an order for six copies at about $11 each, and then simply sold SCG all copies in my possession for $15. Free money? Sure, why not?

There is one other SCG price hike of which the MTG finance community is aware: promo Gitaxian Probe.

By increasing their buy price to $10 and sell price to $19.99 they single-handedly orchestrated a rampant buy-out of the blue sorcery. If they had trouble keeping these in stock before, they sure won’t anymore.

As I mentioned before, I was delighted to sell Star City Games my Ancient Tombs at their newly profitable buy price. I also shipped them my Temporal Manipulation, which they insist is a $120 card.

After buying this one on Amazon.com for $65 I was more than happy to trade it to SCG for $100 in store credit, which bought me a “Heavily Played” (read: Moderately Played) Scrubland and Taiga. Trading them my Ancient Tombs bought me a similarly conditioned Tundra. Money well spent.

Oh, and I also traded them my two foil Little Girls for another $50 in credit to obtain another HP Scrubland simply because no one else in the entire room wanted them for this much.

My observations of other dealers’ buylists were fairly mixed. I was eager to sell some recently spiked Modern staples to some vendors, but not all Modern cards were looked upon favorably. Despite recent buyout attempts, the best I could get on my Birthing Pods was $11. This is about the proceeds one would obtain from selling them on eBay after fees and shipping so I accepted. 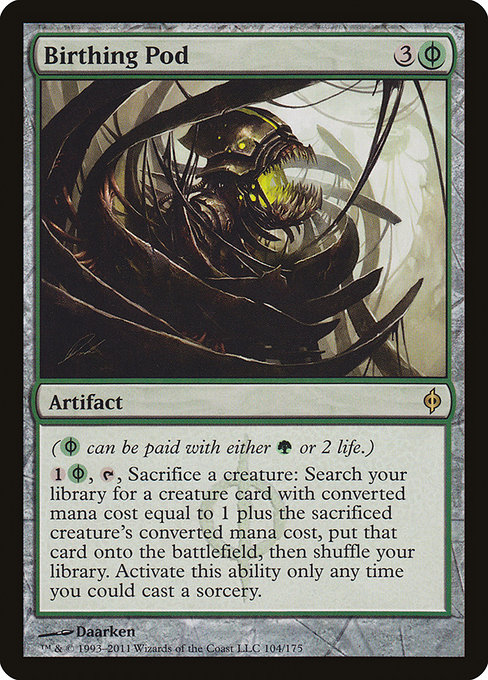 Spellskite buy prices were actually a little higher, which was favorable. On the other hand the best I could get on my Inkmoth Nexus was $7.25ish. I still sold most of mine, again because the amount I’d make selling on eBay would be only marginally higher.

Other sales I gladly made were my Snapcaster Mages at $27, Defense Grids at $5, Torpor Orbs at $2 and white-bordered Chokes at $1. All of these sales led to ample profit.

What I Didn’t Sell

The number one card I refused to let go of was Restoration Angel. The best buy price I received on this versatile angel was $6 but I know they will climb higher. After all, some announcers claim she sees more play than Tarmogoyf in Modern now. While the statement may be a bit hyperbolic, I still believe there’s merit to the sentiment. I’m holding.

I also refused to sell any shocklands or Scars of Mirrodin fast lands. The only buylist that was remotely tempting was a $4 offer on Razorverge Thicket. Being the most played fast land in all of Magic, I know this number will inevitably go higher. I decided to wait.

What I (Tried to) Acquire

On the other end of the spectrum there were a number of cards I actively acquired throughout the day. Dual lands were the biggest target after the recent price bumps. But I also pursued a few Modern cards.

I managed to find a set of SP Gemstone Mine at $4 each. This land has been on a tear of late, and I see it hitting $10 before too long. Unfortunately most dealers had zero in stock so this was all I could obtain.

I also traded for another Cavern of Souls and Arcbound Ravager. I like both of these heading into Modern PTQ season and even beyond. I don’t expect Ravager to see another reprint after appearing in Modern Masters and it may be a bit too soon for a Cavern reprint. Hopefully this pays off.

Refocusing for the Future

After a GP I like to take a step back, reorganize my binder and identify my MTG finance strategy for the future. It’s important that I assess where I succeeded in speculating (Torpor Orb, Snapcaster Mage) and where I didn’t do so well (Geist of Saint Traft, Azusa, Lost but Seeking). By learning from my past decisions I can become a more capable MTG investor going forward.

This time around I solidified my MTG finance mission statement: “My goal is not to make the most money possible. It’s just to make money.” I could have held out on some of my sales in anticipation of reaping larger profits. But the ease of selling to vendors at a Grand Prix for immediate cash is just too advantageous to pass up. By turning over inventory I am enabled to refocus my resources into better planned, more focused positions.

And while I did sell a few things I perhaps should have held onto longer, I don’t regret a single sale. Cards I felt had significantly more room to run I kept or even acquired. And I’m confident I’ll make smarter investment decisions moving forward.

This is a priceless benefit of attending a major event like a Grand Prix. The experiences, knowledge acquired, connections made, and vendor relationships established are extremely valuable going forward. The fact that I can reap all of these non-monetary benefits while also making some cash is an underlying motivator for MTG finance.