MTG finance can be a highly profitable venture, but it can also be an enormous time sink. If your primary income source is selling Magic cards, you’ve probably already accepted this fact. You can’t expect to make a living wage if you’re not willing to put in full-time hours, after all.

But for many, myself included, MTG finance is a hobby, a supplement to a non-MTG-fueled income, and/or a part-time job of sorts. If this describes your situation, then today’s article is for you.

A few years ago, I traded constantly at FNMs. I was the guy going around asking everyone in the room, “Got trades?”. Trading was my primary out at that time, to the point where I didn’t like selling cards for cash, because I wasn’t getting “full value” for them. I was playing Standard at that time, so my trades were all aimed obtaining cards for decks. I wasn’t tuned in to the MTG finance community yet, but I intuitively bought low and sold high to the best of my abilities.

A little further down the road, I found that I still traded a lot, but realized that I didn’t need to build up a large personal collection. I was discovering more and more that Draft was my favorite format and that I probably didn’t need more than one Standard deck. I got over my illogical aversion to selling cards, and I turned to eBay to supplement my trading.

Fast forward to today: I exclusively draft now. I don’t need cards for Standard, and rarely trade anymore. When I go to my LGS, I’m there to win a draft, not to haggle over dimes with players who don’t understand why I won’t trade Modern staples for Standard-only cards. For many months now, I’ve been leaving my LGS having completed either one or zero trades. It’s just not worth the time to me anymore.

On top of that, I’ve completely given up on eBay. Listing items takes a long time, especially since stock photos from Gatherer are no longer acceptable. Even worse, if I list a whole bunch of separate items, they’re not all going to sell at the same time. When I have several active eBay listings, that likely means I have to go to the post office every day during the week. And I despise going to the post office.

My evolving willingness to invest time and money into different aspects of Magic was influenced not only by my preferences within the game, but also my personal life. I don’t know about you, but I find that the older I get, the more responsibilities I have. Money, family, work, and school are among the most common, and you probably have a few specific to your own situation. The important part is recognizing how much time you’re willing and able to devote to MTG finance despite your outside responsibilities.

The thing about grinding trades or selling on eBay/TCGplayer is that people have to actively want your cards. Not only that, but people aren’t going to want them all at once. You have to be willing to list and relist, pack and ship on a near-daily basis, and look through binder after binder. With trades, you might find someone who wants something but nothing you want in return. Selling online comes with constantly having your prices undercut and being forced to lower them in order to make sales.

Instead of these tedious methods, my primary out for cards these days is buylisting. Back when I used to grind trades, I thought buylisting was horribly ineffective. I couldn’t understand players who sold their collections to dealers. “You’re just getting a fraction of the value that way,” I would say. But I’ve changed my tune now.

Buylisting offers perks that none of these other methods do: immediate sales at your convenience, only one trip to the post office, advance knowledge of how much you’ll be making, and no transaction fees. Since this has become my primary out, I’ve put together a buylist only a few times a year. In the interim, I keep an eye out for good acquisitions (usually bought with cash or store credit these days) to go with my next buylist order.

Here’s a very rough visual representation of my thinking behind MTG finance. 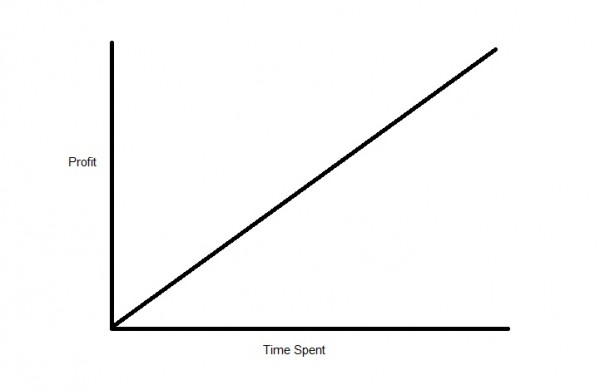 Yes, I was eking out a little bit of extra cash by grinding trades and selling on eBay, but it took me much longer to make that extra profit. As more demands in my life have come up, I’ve begun to value my time more than my money. Am I making less profit? Almost certainly. But I’m devoting a fraction of the attention I used to, and am still indeed seeing gains.

I can’t tell you the best system for you, because only you know where on the above spectrum you fall. It’s also a guarantee that your priorities change as your life advances. So don’t think that just because one way is best for you right now that it always will be. If you recognize the circumstances you’re in and stay open to change, you’ll be best able to determine the time-and-money investment strategy that’s right for you.

MTG Finance on a Time Budget

Assuming you like the idea of my current strategy—spending just a few hours a week actively involved in MTG finance but still making decent profits—here’s some tips to help you maximize value:

Buy cards due for price corrections. My current specs are cards like Primeval Titan, Birthing Pod, and Restoration Angel: cards that see play and were undervalued at the time of purchase. I got in on all of these cards before they spiked (and am still holding them because I anticipate further increases during Modern season).

Don’t buy into coverage hype. I watch coverage for entertainment. I don’t often buy cards seeing play on camera because everybody else will be on that plan. Cards like Porphyry Nodes and Amulet of Vigor require fast action to turn a profit, which just doesn’t fit with my current strategy. In my opinion, watching a card you’re already deep on see on-camera play is the best way to enjoy coverage.

Be aware of buylist values for your deepest specs. One thing I do spend a decent amount of time on, at least comparatively, is checking the buylist price on the cards I’m deepest on. I don’t send buylist orders on a regular schedule. Instead, I send them when an investment has hit a target price. Once something hits, it’s time to prepare a buylist order.

Be prepared to spend time when it’s necessary. Going with my last point, even though I usually only send a buylist order a few times a year, when I do send one, it’s a big one. Thus, it’s usually a culmination of a lot of work. The cost of spending as little time as possible on MTG finance activities is that when it is time to make some profit, it’s going to take a while to get everything ready to go. Minimizing time spent is great, but don’t be lazy. When there’s work to do, do it right.

Pay attention to the MTG finance community. My favorite sources for MTG finance info these days are Twitter and QS. You’re ultimately going to be making your own decisions, but a tip from a financier you trust can push you in a direction to make a good investment. On the flipside, there’s a lot of noise out there, so be sure to know the reasons you think a particular spec is good. If you don’t know why a card is going up, you probably shouldn’t buy it.

Be on the lookout for cards at buylist prices. Any time you can acquire cards for buylist prices, be it through other players, underpriced singles, or just buying collections, you should do it (unless, of course, the cards are rotating Standard staples or crashing in price due to some other factor). This may not come up often for non-retailers, but it’s one of the safest things you can do in MTG finance, so these should be opportunities you try to create.

Remember: situations change. I have a pretty nice full-time job right now, but in this economy, I can’t be sure that will always be the case. All of my MTG finance activities are education for a possible future where I need these skills to survive. I don’t particularly want to ever reach that point, but it’s nice to know I have a fallback if I need it. Every success and failure you have with speculating is a lesson, and you should treat it that way. Take notes. Keep records. Don’t make the same mistakes over and over again. And be prepared to change your strategy when your situation warrants it.

I’ve been thinking about this article for quite a while, and as a result, I had a lot to say. Ironically, this means that drafting and then trimming this article down to a digestible length took me longer than most of the articles I’ve written for QS. I just finished cutting about a quarter of this piece, so if you have any questions, feel free to hit me up on Twitter, @dbro37. There’s a good chance I’ve got an answer ready to go.

5 thoughts on “Insider: MTG Finance on a Time Budget”