What’s that? Fracturing Gust is a useful one-of sideboard card for a few decks that want to play hate against enchantment- and artifact-themed decks? And even though tier-one decks like Melira Pod (five mana to destroy Birthing Pod seems loose), Splinter Twin, Jund and Scapeshift don’t worry about Fracturing Gust, there are a few decks that do? BAM!

I promise you this was the last bit of sarcasm in this article. But isn’t the current reality of Modern speculation absolutely ridiculous? If Fracturing Gust can become a $15 card overnight then anything is truly possible.

Of course three days later the price halved to just over $5 with the trajectory still pointing downwards. But that doesn’t mean no profit was made on this card. When the baseline is a buck, there’s a lot of potential.

It may come as no surprise to you that not all buyouts are well-planned and well-executed. On many occasions someone gets wind of a new card seeing Modern play and immediately buys out all cheap copies on TCG Player. This action manipulates mtgstocks.com, which in turn convinces many other foolhardy speculators to follow suit. Action precedes thought far too frequently nowadays.

I would propose that missing out on a buyout such as this one may be more of a blessing than a curse. These buyouts do contain some valuable information, which can often be reapplied. Consider a recent situation I came across coming out of Pro Tour Born of the Gods involving two sideboard artifacts.

One successful Pro Tour deck jammed two copies of this powerful artifact in its sideboard. I am completely serious when I say that I used to own a set of these for casual play and absolutely loved how they disrupt an opponent’s attack plan. Sadly I sold my copies for just a few bucks each when I decided to move my funds elsewhere.

The single top-performing Modern deck that ran this artifact was piloted by Dominink Prosek in an aggressive Red Burn-type build. While there were three printings for Ensnaring Bridge, the card hasn’t seen print recently. This led to a smaller supply on TCG Player, which in turn triggered an easy buyout. Classic hype.

Compare this card to…

This card was also printed in three different sets, and very similar sets for that matter. It’s also an artifact that saw some play in sideboards at the Pro Tour. For some reason, Defense Grid was not readily noticed like Ensnaring Bridge. Notice how the card spiked about a week later.

When I saw the Ensnaring Bridge spike my first reaction was not to look for Ensnaring Bridges to buy. Instead, I discovered a tweet (one that I sadly cannot find) that pointed out a significant comparison. The tweet elegantly stated that two copies of Ensnaring Bridge could be found in the top performing Modern PT decks. Meanwhile there were a total of nineteen copies of Defense Grid in those same deck lists.

Yet Ensnaring Bridge was bought out and not Defense Grid?! Upon discovering this disconnect I purchased eleven copies of the cheaper artifact for an average price of under $3 each. Maybe I should have gone deeper, because the subsequent price spike was virtually inevitable.

Reapplication is a powerful concept. The word is synonymous with the over-used phrase “don’t reinvent the wheel”. The situation above can be reapplied to discover future opportunities before it’s too late.

After all, this isn’t an isolated incident. As crazy as it seems, the most played Scars of Mirrodin fastland-- Razorverge Thicket-- was the also the cheapest. These opportunities are real.

Now it’s Sunday morning, before Day 2 of GP Modern-is-a-hit Richmond has officially begun. Yet the speculators didn’t bother to wait to see top deck lists. They jumped all over Ad Nauseam, the cornerstone of a newly successful deck in Modern. Looking at the list played by the pros at PT Born of the Gods, I can identify the cards that may have been overlooked during this buyout.

Angel's Grace is one I really like. The card is incredibly powerful and practically uncounterable.

The card was reprinted in Modern Masters, but so what? Cryptic Command was reprinted at rare, too. And Time Spiral is an awfully old set relative to Shards of Alara. As a four-of in the Modern list (along with fringe Legacy playability) I can see Angel's Grace moving higher.

Another Time Spiral card from the list is Lotus Bloom. Again, the artifact was reprinted in Modern Masters but unless it’s reprinted again, this won’t matter much to speculators.

Gemstone Mine is another four-of in the list, and a versatile one for that matter. The only problem here is that Gemstone Mine has already rapidly risen over the last couple months. I didn’t even notice this until now--did you?

The Modern Ad Nauseam example is just the most recent one I could come up with. There have been others in the past and there will be more in the future.

Rather than dwell too long on the specific suggestion above I ask that readers focus on future opportunities. Speculators tend to fall in love with an idea before thoroughly evaluating what the best targets are. Often it’s a snap-decision to buy in response to someone’s post or tweet.

My recommendation is to use logic in order to evaluate what the best targets are for a breakout card. Sometimes it may be the card everyone’s already targeting, but not always. Market inefficiencies do exist and they can lead to significant profits.

While everyone focuses on a select few sideboard cards, take a critical look at what's seeing the most play and what is truly effective. You may discover the next big thing...before everyone else does! Example: 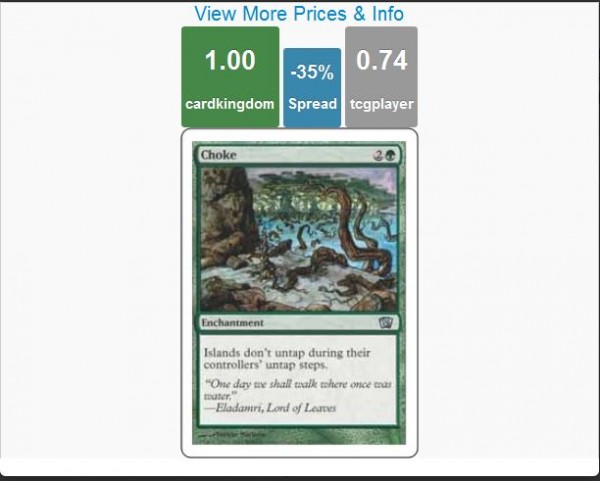 The reality of today is that there are many naïve, emotional speculators trying their hand at this business. Some will be better than others, and some will be more rash in their decision-making. When this happens it’s best to take a step back, apply your knowledge and experience, and make an informed investment. While Ad Nauseam spiked overnight, Lotus Bloom and Angel's Grace will continue their upward trajectory for months to come.

Most of the time, I don’t mind waiting. It’s easier to sell a card after a steady rise than after a buyout.

When prices race to the bottom, as they often do after a buyout, profiting at the higher price becomes tricky because so many people dig out their old copies to sell immediately. Not so with a gradual increase. Buy a couple sets of the overlooked cards and proceed to reap the rewards when the timing suits your needs.