FTV: Annihilation is coming soon, and the name certainly gives a few clues as to potential contents. Will there be Eldrazi? Wrath effects? One thing we know now is that Wrath of God is in the set, and its new look is....interesting.

The new border combined with the art of a Theros-block-looking god wrathing the board is sure to polarize people. Do you like the new look? Do you hate the new look? Are you somehow entirely ambivalent? Personally, I think it looks like ballbags, but part of that might be some dissonance with the new card border, which I don't like. Still, the new border is here to stay so it's about time we all got used to it. There is still hope for an Eldrazi creature in FTV: Annihilation, so stay tuned for spoilers as they come in.

A card spoiled at PAX was Breigo 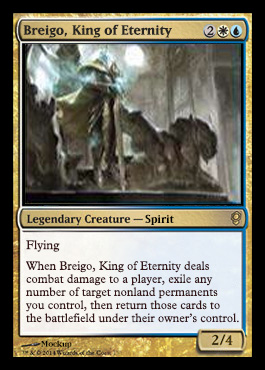 EDH decks using Roon of the Hidden Realm or Derevi, Empyrial Tactician rejoice. If Breigo makes contact with anyone's face, you can be sure those decks are set up to take advantage. Hitting is harder than you might think sometimes in EDH, and it dies to Doom Blade, which is what I say when an EDH creature is unfair and I want to play with it. I think Breigo is overrated right now, but I think he's a snap-include in the decks that want to run him even if he isn't as unfair as people hope. It's encouraging to see cards from Conspiracy that have applications outside the wacky draft matches.