You thought I was going to give you some specs to pick up, didn't you? Well, you're hooked now. Try and contain your disappointment, I have something that is actually pretty useful to go over and can potentially make you more money than even the spiciest spec.

I talked a bit about buylisting these last few weeks, but I want to talk today about something you'll need to do before you can even get to that point: picking a collection.

Are You Doing a Tutorial on Shoe Tying Next?

Okay, wow, tough crowd. This isn't mean to insult anyone's intelligence, it's meant to demonstrate a few ways I save time when I pick collections.

Since you're all insiders, you have access to Trader Tools. Since the site I use for buylisting primarily is Trader Tools, I use Trader Tools as a...er...tool when I pick collections as well.

Even if you use other methods to buylist, I still recommend taking a few seconds to do some research before you pick. I have spent enough time on buylisting to know that there are always going to be surprises. There are a few different reasons why stores put cards on their buylist.

Some of those things you can predict, and some you can't. Sure, it's obvious that you pick Lightning Strike out of Theros. But how many of you are picking Spellheart Chimera? All of you? No? Really?

Well, I pick the Chimera, and that's because I spot-checked the set before I picked it and I noticed that Spellheart Chimera is (today) buylisting for almost the same amount as Lightning Strike. Don't believe me? 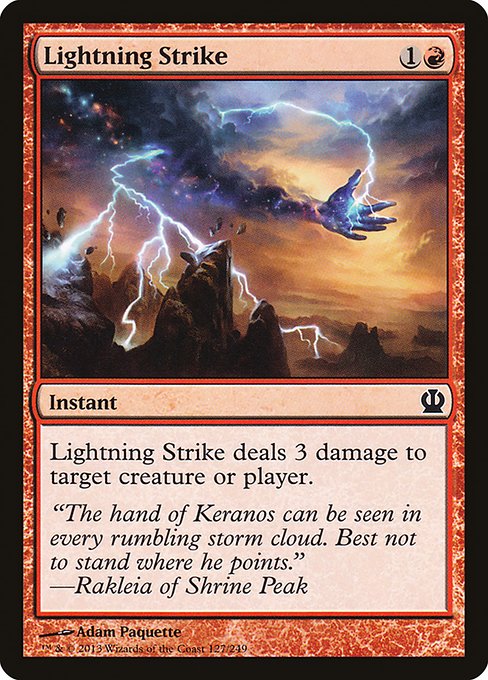 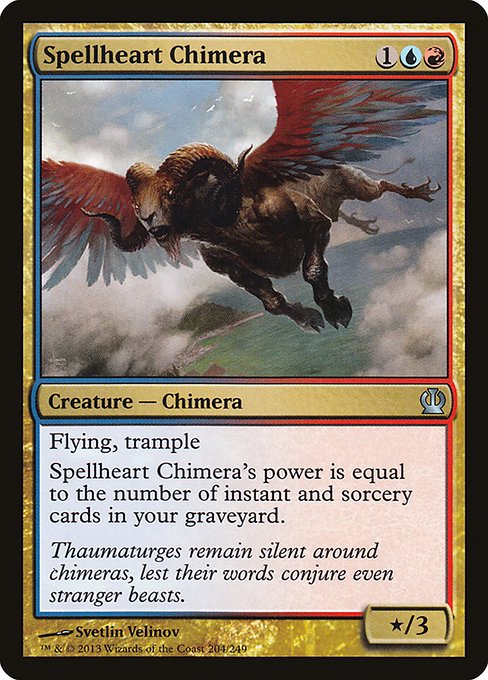 While it's not that surprising that an uncommon should buylist for as much as a common, we're talking about a big gap in appeal here. Lightning Strike is a functional reprint of a staple burn spell and gets play in Standard red decks. The other you can find in trash cans after a draft and appeals mainly to casuals.

If you are about to pick a big pile of Theros cards, wouldn't it be useful to know if there are any surprises like Spellheart Chimera?

There is a quick and easy way to do this.

This is the home page of Trader Tools. The arrow points to a dropdown that allows you to sort by set.

When you click the button, it will bring up a page with the entire set sorted.

The set view page has a few filters you can click. If you click the dollar sign the arrow points to it will sort by buy price. Click it once to put the lowest buy price on top, click it again to put the highest on top, sorting the set in descending order. 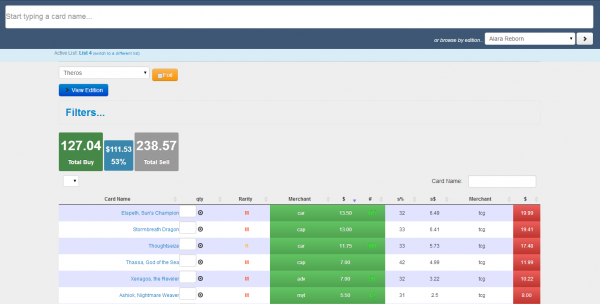 That's more like it. Elspeth is on top where it belongs, followed by Stormbreath Dragon, etc. Still, you don't need Trader Tools to tell you to pick Elspeth, Sun's Champion out of a collection. That would be ridiculous. So let's scroll down a smidge. 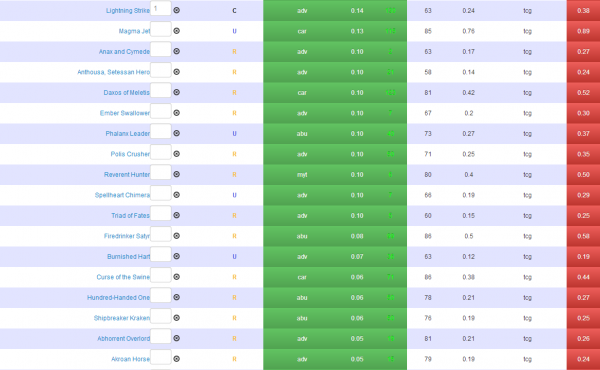 Do you pick above a nickel? If you do, Burnished Hart is a card you have likely been missing. You don't have to pick Hart out, but now you have the option. You know every time you pause for a tenth of a second to drop one into a pile, you've made $0.07, which by my calculations, is better than a shotgun blast to the torso.

If you feel like picking these out to pad an order to Adventures On, you know that a pile of these will help you pay for shipping. Flat Rate shipping containers make it possible to make money doing that. If you're not inclined to pick them, fine, but at least you know that they have value.

What about an older set, potentially before you started playing Magic? Same procedure. 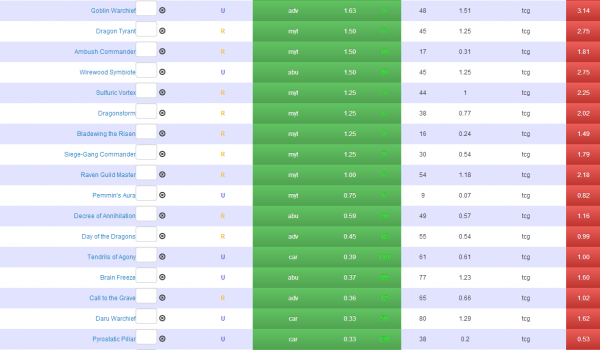 Sure, you would have pulled Wirewood Symbiote and Undead Warchief and Pyrostatic Pillar but how many of you

Sure, if you do this enough, you might know that off the top of your head, but if you don't, taking a bit to refresh yourself before you do a big pick will make you miss fewer picks. Trader Tools is a good resource and you have access to it, so make the most of your subscription and use it if you need it.

You want to make the most of sorting Trader Tools by set? You may not like to hear it, but...

You Have to Sort the Collection By Set

Yes, this sucks. However, as I said in previous installments, it is going to save you time in the long run.

I also hold the cards upside down so when I flip through them, I can quickly flip through and see the expansion symbols. It's more important to see that than to see the card name, so since I am right-handed, I flip the cards upside down so I can view more cards in less time. This was one of those ideas that I was mad at myself for not thinking of sooner.

Since I like to sit on my computer and watch Netflix while I do boring stuff like sorting sets, I keep a window with Trader Tools ready to go in case I want to look something up.

Do You Advocate Set-Sorting Everything Before Picking?

I really would not. I tend to do a "rough" pick, erring on the side of caution and "overpicking", which means I will assume a card is a pick rather than not. It's easier to put a card back in the box than to realize later that Night's Whisper is worth more than $1 and you left about a dozen of them... in one of those four boxes you just picked.

Not wanting to leave cards in the boxes is one of the main reasons I will take a minute to check every set for surprises. You can quickly bring up each expansion set, sort by buylist price and check for cards that you didn't expect before you pick the cards. This may seem a little bit time consuming, but if you are confident in your picks, you will pick faster and that will ultimately save you some time in the long run.

Sure, you may lower your chances of missing something if you sort everything first before you pick so you can check the entire set against the list of picks on Trader Tools, but how much is your time worth?

A lot of the things I am suggesting are designed to save you time, and wasting it this way isn't worth the small amounts of value you will avoid missing. I think taking a small amount of time to refresh your memory is a good investment that will pay itself off in time saved, but looking up every single card in Trader Tools is not worth it.

This Card Should Be a Pick!

Maybe it should. I went over the reasons a card is a pick and the opposite can be true. A card that a dealer has a ton of but is a pick ordinarily might not be on the list at the time you're buylisting.

If I run across a card that I feel like I shipped last time I buylisted, or which is better than its price would indicate, or if I am just unwilling to ship for the price dealers are paying, I have a special box set aside. I put those cards there and sit on them for a little while.

The next time I buylist a major order, which could be a week or two later, I will recheck some of those cards. A lot of the time, I will ship a significant portion of that box. Some things were being underpaid on and I will find that, in time, the price is more fair.

Also, cards that go above the number of copies a dealer will take go into this box. I could ship them to the next dealer on the list for cheaper, but I like to sit on them to see if the original dealer paying the best raises their quantity again. If it's a hot card, they will blow through copies and need more. If it's not a hot card, it isn't a big deal, and its price usually doesn't make it worth bothering about.

One technique I will use to identify cards like this is to sort by spread. 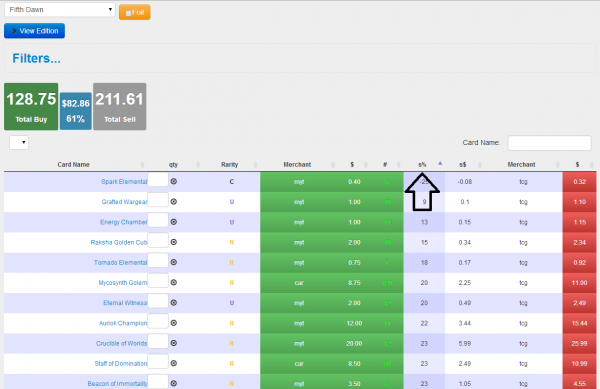 Clicking the icon I indicate here will sort by spread. Click once to put the highest spread on top. You can check this for cards with high retail prices. If you find a card with a decent retail price and a high spread, those are cards to sit on.

For whatever reason, dealers are not jazzed about picking those cards up. You can wait to see if the price goes up later.

What do you have to lose? The opportunity cost to having collection fodder is low and if you make more money just because you sat on a card with an artificially high spread, you did well.

If you click on the icon twice, it will put lowest spread on top. Looks like there is a negative spread on Spark Elemental right now. I had no idea until I picked a random set to take this screenshot. Who knows what you'll find if you spend some time perusing Trader Tools?

That's all I've got for you this week. If you have any questions, or want to tell me I suck, leave it in the comments.

17 thoughts on “Insider: Pick of the Week”