I am going to be starting a series here on Insider. My contribution to the free side will continue, but “Jason's Alticle” as it existed is no more. The series has evolved and come a long way since its inception and I thank everyone for their support and suggestions which helped shape the series. I'm going to miss writing it, but I still get to contribute to the free side, only now it will be a daily thing. It's all pretty exciting and I'm glad to continue to evolve here at Quiet Speculation.

If you're a long-time reader of my column on the free side, you may be wondering whether the Insider side is the appropriate venue for me. You're correct to be concerned, but not to worry. We've decided that my writing on Insider is going to focus on an aspect of Magic finance that gets glossed over a bit–the 90% of Magic finance that doesn't involve speculation.

I think so, yes. Don't get me wrong--there have been some exceptional articles, both on Quiet Speculation and elsewhere, that deal with the day-to-day, “grindy” aspects of Magic finance. However, those articles tend to be the exception rather than the rule. I aim to make the grind my focus. Is that a good name for an article series? “The Grind”? I don't know--that might make people think it's going to be a grind to read. I'm not here to bore anyone, I'm here to help you maximize your profit by increasing your efficiency and help you pull treasure from trash.

My plan for this series of articles is as follows.

I'm sure a lot more than that is going to happen, so I hope you'll join me. It should be a wild ride.

I am going to close out this introductory article by making the case for doing something that is terrible, no fun, time-consuming and arduous because I think it actually saves time in the long run.

Why You Should Set Sort and Alphabetize Before You Buylist

I feel like I just heard the sound of 1,000 browser windows all slamming shut at once. Yes, today is April Fool's Day. No I am not screwing with you. Despite set sorting and alphabetizing being incredibly time-consuming and sounding like about as much fun as a “just because” colonoscopy, I assure you that it will save you time, and ultimately lead to faster and smoother buylisting transactions.

I can sense your skepticism, but bear with me. There is one point in what I consider a three step process where set sorting and alphabetizing will make a small difference and two points where it will make a gigantic difference. If your order is over $200 I can virtually guarantee the time that you spend in this extra sorting step will be more than made up later.

In order to make a compelling case, let's first go over what these three steps of the process are.

That is my estimation of the process. Those are the three points at which the order in which you have your cards organized matters. Having your cards in the “correct” order at all three of those points will save you a lot of time and trouble, and I think explaining what each of those steps entails will give you a better picture of why set-sorted and alphabetized is the “correct” order.

Inputting Cards Into the Buylist Interface

I personally buylist using Trader Tools but before that was a possibility, I used to sell to ABU games, Troll and Toad (back when they had the hotlist) and Card Kingdom mostly, although I also used bidwicket.com and that had me shipping to quite a few other dealers.

For the purposes of using bidwicket, each card had to be typed in manually. You would input the card name, select the correct item from a menu of similar items, and scroll down to see which dealer was paying the best. You could add the card to a bidwicket cart and then check out with each individual store later.

It was time-consuming but less so than checking five different buylists to see who paid the best. Before I used bidwicket I used to ship almost exclusively to one dealer who paid the best on average, which wasn't the most efficient way to get paid.

Whether you're using Bidwicket or Trader Tools or just good, old-fashioned hitting up a dealer's website, it probably doesn't seem like you need to sort at all for this step. In fact, when I first started buylisting, I didn't. I would take a big pile of cards and just go to town. While it shouldn't matter for a site like bidwicket since you have to type each card in individually, I quickly realize why it was a good idea to have the cards sorted for this step. This occurred to me the first time I had to type in the name of a card a second time.

This kind of redundant work was a gigantic waste of time. Any time I might have saved by not sorting beforehand quickly evaporated since each card I had to retype in added up. Worse still, the box I put the cards for sale into had to be sorted later since a card I typed in twice was in two different places in the box.

I solved this by sorting by color so I at least could go through a smaller pile looking for cards that were the same so I wouldn't have to type them in twice. This time added up, too, and I quickly began to subscribe to the Mike Ehrmatraut school of thought. 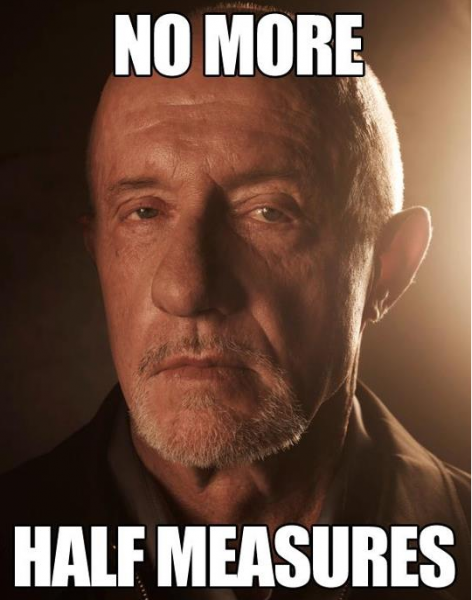 Since I was doing a lot of sorting anyway and it wasn't super efficient, I quickly realized the need for a more comprehensive pre-sort.

Another caveat is that having the cards set-sorted and alphabetized saved an insane amount of time when using the website of buyers like Card Kingdom. Card Kingdom's buylist interface allows you to select a set and it will bring up an interactive list of each card from that set they were buying. All you need do is put in the quantity in the box next to the card. You can get through a stack in a fraction of the time and since you don't have to keep jumping between sets, the process is over so quickly you will make up any time that you may have invested in a sort.

Verifying You Have the Correct Cards

If you're using Bidwicket or Trader Tools, one comprehensive list of cards is split among all of the individual buyers you will be mailing cards to. At this point, you will need to verify that you have all of the cards that you are sending to each dealer and verify that they are in the right pile. You will be given a list from each dealer, either in the form of a confirmation screen or confirmation e-mail. The order in that list? Set-sorted and alphabetized.

If your cards are already in that order, and if you put the sets in a logical order when you sorted, you will find that the cards are in that order already by virtue of having gone into the box in that order. I know that when I use Trader Tools, sometimes the dealer paying the most can change between the time I add all the cards to the list and the time I check out. I have three boxes, one for each dealer, and I put the cards into the box for the dealer paying the most when I make the list, but if that changes by the time I check out, knowing all three boxes have cards that are sorted in the most indexable manner possible means I can quickly find a card if it's not in the correct box.

Making sure the cards are in the order specified by the confirmation e-mail or page really helps with the next step.

Buyers will require that you ship the cards in the exact order specified by the confirmation e-mail or page. This allows them to quickly verify that you sent the exact order that they offered to pay for. If you make their lives hard, they may dock you money or send the order back.

They may not do any of that, but you certainly won't make friends, and you want to make friends. Friends take it easy on you when they grade the cards you send them. Friends make sure they pay what they offered in the e-mail and don't knock any money off for anything silly. Friends make sure you order gets processed and you get paid quickly.

If the cards are already in the correct order, the process of packaging is simple. Since I organize the cards in 1,000 count boxes when I am compiling the orders, I simply close up those boxes and put them in USPS flat rate boxes. Since I already checked that the cards were in order, I don't need to do a secondary verification, but if I did, it would be very quick. This is another step in the process where you can save time by sorting beforehand.

Whenever I get a new collection in, the first thing I do now is strip out everything big and flashy and obvious that I won't be buylisting. I still retail sale a significant number of cards, and I have taken to raiding collections for stuff to jam in my EDH decks. I get high from my own supply, but having a column about EDH has been enough justification for me to rationalize pilfering cards that I should be selling.

After that, I set-sort and alphabetize everything. The benefit of having done that for previous collections is that I have the boxes all set up and I can just jam the new cards into those boxes. If I get cards identical to cards I've already buylisted, it's no big deal, but if I get cards I haven't buylisted yet, I know I've saved myself having to type those card names in twice and that ultimately saves time.

The only drawback to this method is that this can cost a bit of extra time when using Trader Tools. If you buy a collection with 200 copies of Counterspell and you put them all together, when you go into Trader Tools and type “Counterspell” it will bring up a list of every edition and you can put the quantities in the boxes and be done with Counterspell forever. If you have them set-sorted, each time you come across a Counterspell you will have to type it in again.

This wastes time in the first step of the process, but since it saves time in the other two, I think it's a wash, and this method saves so much time for every other scenario that this one corner case doesn't deter me much.

16 thoughts on “Insider: Saving Time By Spending It”