This weekend I was at Grand Prix Philly, where I met a lot of awesome people. I rarely get out to paper tournaments these days, and there’s nothing like the buzz of a room right before a GP starts.

I spoke to a lot of paper players, many of whom told me that they avoid Magic Online. When I asked why, they usually cited two factors: 1) the cost of the cards (they didn’t want to manage two collections, or didn’t like the idea of spending real money on virtual products); and 2) the temptation of being able to enter a draft queue at any time of day.

The first concern is something of an illusion—as I’ll discuss in future articles, money invested wisely in an MTGO collection can deliver enjoyment and more than pay for itself. But the second concern—the siren song of drafting—is completely legitimate.

Ryan Spain, co-founder of the Limited Resources Podcast, once coined the phrase “the slow bleed” to refer to Magic drafting. He noted that it’s virtual impossible to “go infinite” online, but that by playing tighter (and more selectively) you can slow the bleeding and get more play for each dollar you spend.

The EV of a Draft

Drafting online is a lot of fun, but it’s a mugs game. How bad are the odds? While it depends a bit on the set, the numbers are almost invariably grim. The following numbers are lifted from MagicEV, a terrific tool designed by a QS member who goes by giambi777. They take into account the value of cards opened and expected booster pack payouts.

Unless you have a strong stomach, don’t look at this chart: 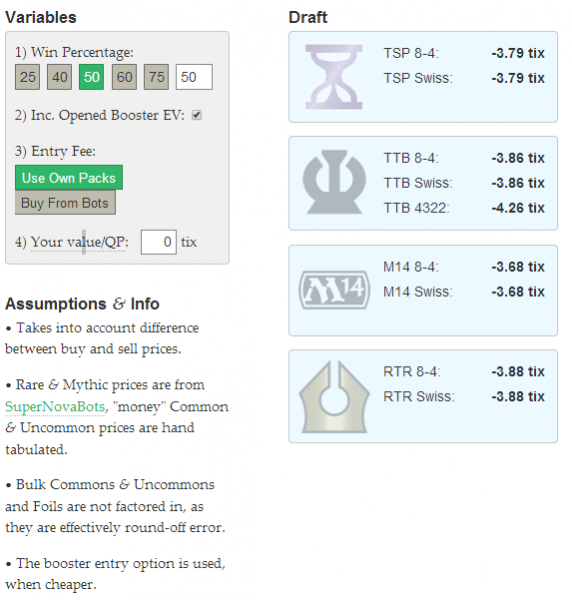 As you can see, with a 50% win rate, you are losing about 4 tix for every draft you enter. And just to break even in Limited you need to maintain a 65-70% match win record—something almost no one can sustain.

To put this in perspective, Lars Dam was Limited Player of the Year on MTGO and managed an insane 69% win rate, which is almost unheard of in a sample of that size. Top tier grinders like Dmitri Butakov (“Butakov” online), Bing Luke (“Prolepsis”), and our own Paul Nemeth (“Zwischenzug”), are among the top online players in the world, and the Magic Online Championship Series showed their lifetime win rate is closer to 60-65%. 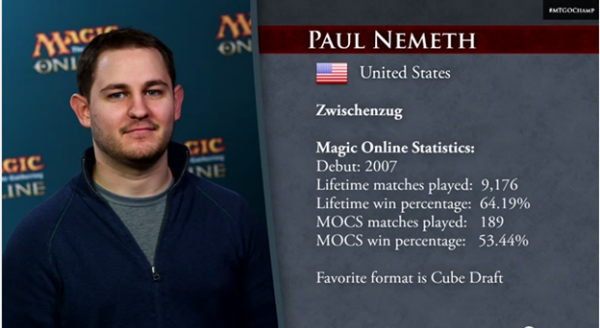 Everyone thinks they are an above-average driver—and an above average drafter. Sometimes you go on a tear and feel like you’re crushing a format. But chances are you’re within a standard deviation of a 50% win rate—meaning that you’re losing tickets every time you hear the crackle of digital wrappers.

Why does drafting have a worse Expected Value (EV) on Magic Online than with paper cards? There are multiple reasons, but the short answer is that Magic Online is populated by degenerates who draft around the clock and flood the market with singles.

Because relatively few people play Constructed online, there is not adequate supply to soak up the thousands of boosters that flood the market each day. Redeemers do their part to pull excess cards out of the market, but even they cannot counteract the overflow from drafting.

In paper Magic, boosters cost about 30% less (when bought in bulk) and the median single price is about 30% more. It is possible to draft paper Magic without bleeding, though it can be time consuming to turn your winnings into more drafts. But on Magic Online the deck is stacked.

MTGO card prices also have a higher level of variance, with the best mythics costing more than paper and the average rare holding much less value. It’s a winner-take-all world. An extreme example is Dragon’s Maze, where 65% of the value of resides in just two cards (Voice of Resurgence and Blood Baron of Vizkopa.)

One reason is because there is virtually no “casual” demand on MTGO. Cards either slot into a tournament deck or they are relegated to binder trash, with value only to redeemers. We’ll talk about this more in later articles.

The odds are against you. But if you must draft, following a few basic tips will make your cash go further.

For “bang for the buck”, Swiss is the way to go. If you’re skilled, 8-4s may offer greater EV and stiffer competition, but I personal enjoy the guarantee of three rounds with your deck, especially when you’re learning a format. There is nothing more frustrating that drafting a sweet deck, dying in the first round to mana screw, and netting two games total for your 14 tickets.

Playing all three rounds will also keep you out of the next queue—-thus preventing you from incinerating more tickets. Remember every time you hop in a Theros draft the value of your collection shrinks a little.

4-3-2-2 queues take out a pack from the prize pool, making them cost roughly $0.50 more per draft. That means that if you average two drafts a week, you’ll lose an average of 50 tickets per year just based on your decision to do 4-3-2-2s over Swiss or 8-4s.

The 4-3-2-2 payout is a conspiracy by WoTC to subtly mess with your utility curve. Win one match and you’re almost even! Win two matches and you’re ahead! But it’s an illusion, like the slot machine that shows you two cherries before rolling up a diamond. Don’t fall for it.

Duel Your Draft Decks Against Friends

Ever draft an awesome deck only to lose in round one of an 8-4? You put in all that time and money to draft the thing, tweak the deck, and then you’re landscrewed in game 3. You’re done, right?

Think again. A great way to get more gaming out of the deck you drafted is to duel draft decks with a friend. Ping your buddy and tell him what’s what. Then right click his name and issue a challenge. Select your most recent draft deck (it will be in the “TournamentDecks” folder and have a string of numbers representing the date and time it was drafted.)

Now you have a best-two-out-of-three match with a friend that costs you nothing and gets you more play out of your deck. Make sure you are both playing the right format (Freeform) and that you haven’t traded away any of the cards in the deck.

After a while you can build up a list of buddies who you know like to battle draft decks, which will get more mileage from your gaming dollar.

Drafting is bad EV, but the math changes a little bit when high stakes promos are in play. The past two months players have had a chance to compete for Lion's Eye Diamond (selling for 50-60 tix) and Force of Will (which will probably sell for 65-75 tix once they hit the market next month).

Fifteen QPs gets you a promo, meaning the value of a QP during Force of Will month is roughly 6 tix. That makes this a relatively good moment to play sanctioned events. That said, even when you add in this value, draft is only 1 tix less, and remains a losing proposition. 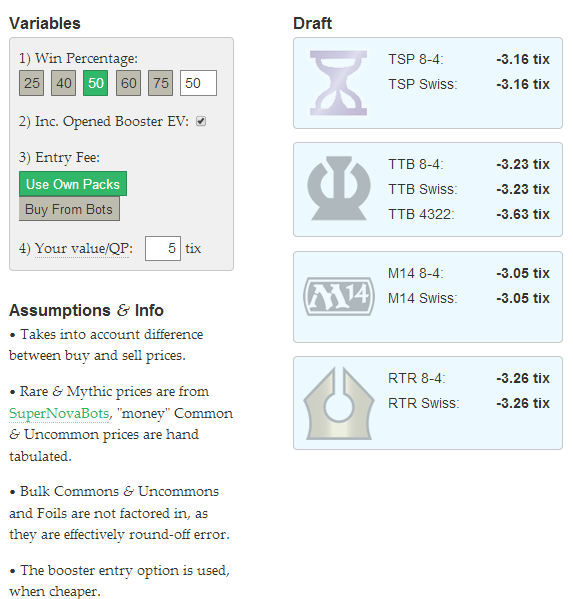 And if you are angling for promos, the draft queues are probably the last place you want to be, since 8-man Constructed queues give away twice as many QPs for a win (and you even get a QP for making the finals.)

Limit Drafting to When You're Undistracted

Some people act like they want to cram in as many drafts as possible. Drafting should be seen as a bit of an indulgence—remember, you are spending $4, on average, to draft. Enjoy it. Play when you’re at your best.

If you just lost a rough game three and are feeling tilted, go take a break, walk around the block, work out, or play a couple games in the tournament practice room. Better still, challenge a friend to duel decks so you get more play from your draft.

Keep a Pricelist Open in a Browser

Unless you are practicing for a Pro Tour (or are a reclusive billionaire on your wifi-eqipped yacht) it makes sense to rare draft. The logic to raredrafting is that you’re playing the long game. Even the best card in your deck only marginally increases your win percentage, whereas a rare in your pile is money in the bank.

I always keep a browser tab open with a pricelist from the set I’m drafting. When drafting Standard-legal sets, I prefer Goatbots because they list buy and sell prices for every card in the set, including money uncommons, and it’s super fast to Ctrl-F a card. For flashbacks I use MTGO Traders, which doesn’t show buy prices, or MTGOWikiprice.com.

Never pass a card unless you first know its value. The other night I was drafting Odyssey block in a Swiss queue and was passed a Tarnished Citadel (buy price: 6 tix) followed by Gravestorm (2 tix). I didn’t know their value…but MTGOWikiprice did. I wasn’t through the first pack and I had already almost made back my cost of entry. It didn’t hurt that I won the draft.

Everyone has a different threshold for what they will pass, but I basically never pass anything worth more than a pack. After pick four, I’ll basically take anything 1 tix or more. This is an important strategy to slow the bleed. Of course, your exact threshold will depend on your strength as a player and the payout structure of your queue.

It’s an obvious feel bad to take a marginal mythic over a key card for your deck, and ultimately you are playing Magic to have fun, so feel free to disregard your rules once in a while. It’s also possible to raredraft and win-on Limited Resources, Brian Wong sometimes talks about his friend Charles Wong, who is both a strong player and a savage raredrafter. Charles takes anything over $0.50, and wins via late-pick commons and synergy.

One final tip: never pass a foil mythic—even bulk foil mythics are valuable because they are the bottleneck for redeemers who want to trade in foil sets. Did you know a foil Medomai the Ageless sells for 12 tickets? Neither did I.

Don’t Be Afraid to File for Comp

It goes without saying, but if anything related to Wizard’s infrastructure causes you distress, you should file a compensation request. Even if it doesn’t directly lead to a game loss, if it’s an ordeal that impinges on your enjoyment you are entitled to reimbursement for your entry fee.

Make sure not to bleed value because of technical difficulties. Wizards currently has a fairly generous policy on reimbursements—be honest and don’t abuse it or you will ruin it for everyone.

Bottom line is that playing Limited online is a losing proposition. Anyone who tells you otherwise is either a world-class player or a world-class self-deceiver.

If you want to go infinite playing Magic Online, do it the way the pros and grinders do—play Constructed. Through its incentive structure, Wizards is basically bribing you to play Constructed, though most people don’t realize this.

We’ll talk about how to get started in the next episode, when I reveal the trade secrets of some top MTGO grinders.

6 thoughts on “Insider: Virtually Infinite on MTGO – Slowing the Bleed”