I like Kenji Egashira. He streams on MODO with the username NumotTheNummy and he recently played Magic events on MODO every day for a whole year. I watched quite a bit, and Brainstorm Brewery sponsored his 365 days of Magic because we love that he is entertaining us as a full-time job. Despite ending his 365 day project, he's still at it.

Kenji's catch phrase whenever anything goes wrong is "Blame Worth", referring to Worth Wollpert who is Magic Online's official whipping boy. Worth occasionally watches Kenji's stream and this weekend, some magic happened. Worth typed the following code into the chat window. 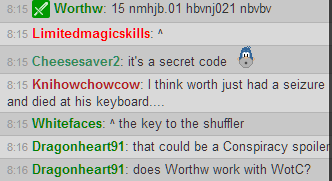 Immediately, Reddit was on the case. Within minutes, a thread was up and Reddit detectives go to work cracking the code.

Was this indeed a Conspiracy spoiler? The Original Poster was credulous.

After hours of fruitless plugging away at cracking the code Worth planted, the secret was revealed.

Conspiracy - where the lands and the hats are foil.