Today I'll be discussing speculating on uncommons. As is often the case with my articles, this is a topic aimed more at the hobbyist financier rather than the professional. If you like the feeling of turning five dollars into 50 in your spare time, read on. If you're trying to pay rent with MTG finance, maybe this can supplement your income, but I have my doubts about how successful you'll be trying to out 500 or more copies of any given uncommon.

Nevertheless, for growing a collection, upgrading a cube or EDH deck, or just funding other hobbies through Magic, paying attention to this commonly overlooked element of MTG finance can really pay off.

Why You Should Care About Uncommons

Anybody who has picked any bulk since Gatecrash came out will tell you that two of the best cards to pull from the set are Experiment One and Burning-Tree Emissary. Although these have both fallen from their highs a bit as we approach RTR block rotation, both were buylisting for over a dollar for most of their times in Standard. 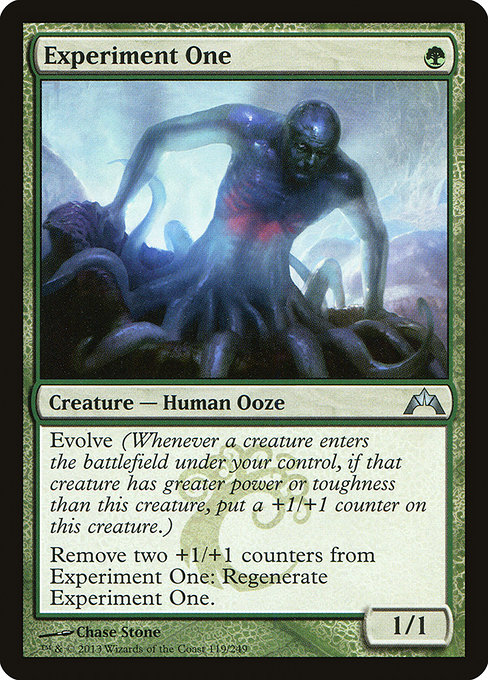 Several months ago, I outed all my copies of Experiment One to a buylist at $1.25 each. That's a solid $5 per playset. Many of these were from my own draft leftovers, but I had a couple playsets that I bought when the set was new. Do you remember what Experiment One's preorder price was? You probably don't, because uncommons are generally ignored during spoiler season.

Experiment One was preordering for as little as a dime at its lowest, although the eight copies I purchased were for just under 25 cents each. Turning $2 into $10 isn't really a big deal in the scheme of things, but little victories like these add up to playing this game we all love for free. Experiment One paid for one of my drafts this year!

Burning-Tree Emissary had a similar trajectory, although I personally wasn't as on top of this one.

Going deep on an uncommon constitutes a certain amount of risk, but if you had bought 200 copies of each of these during Gatecrash preorders, you would have plenty of time to out your copies.

Uncommons are frequently underpriced (or simply priced reasonably) during the preorder period. They trade well to players anxious to build new decks, and if they establish themselves at staples, it's not uncommon to see 1000-percent growth.

There are opportunities outside of preordering underpriced uncommons. As a QS Insider, you've likely figured out that preorder prices for new sets are almost always inflated beyond a sense of reason. As a set gets opened, most cards drop in price to reflect the shrinking demand and growing supply. This is especially true of uncommons.

Pay attention to what you know about future sets. Leading up to Gatecrash (it seems that this time period was my heyday for buying in on uncommons), we knew that Stomping Ground was just around the bend, and some forward-thinking folks started talking about Flinthoof Boar. This time I octupled up, turning $4 into $30.

Uncommons may not make you the most dollars for your time, but because they spike so sharply percentage-wise, they allow you to turn pocket change into something relatively significant. The process takes just a few minutes to place an order and a few more to ship to a buylist or eBay.

Eye to the Eternal

While a set is being drafted, the cards from it are almost always depressed. When an uncommon is highly Eternal-playable but only fringe playable in Standard, this often means the price is lower than one would expect, even when the card is a proven commodity.

A good example (albeit a common) is Gitaxian Probe, which was easily available for 10 to 20 cents during Scars of Mirrodin block drafts and even through much of the following year, despite seeing heavy play in Standard Delver variants. 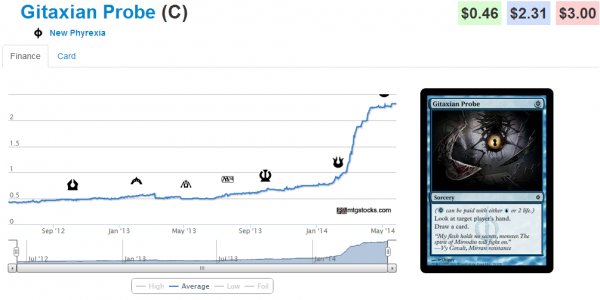 I can't find a graph that goes back to the Scars days, but even looking back just before RTR, you can see that it took a couple years for this to spike, despite heavy play in Standard, Modern and Legacy. Nowadays these buylist for a dollar.

The reason I'm writing about this topic today is because we're getting relatively close to Magic 2015 Core Set spoilers. You may or may not have noticed this, but there's going to be a change with set construction starting with M15: 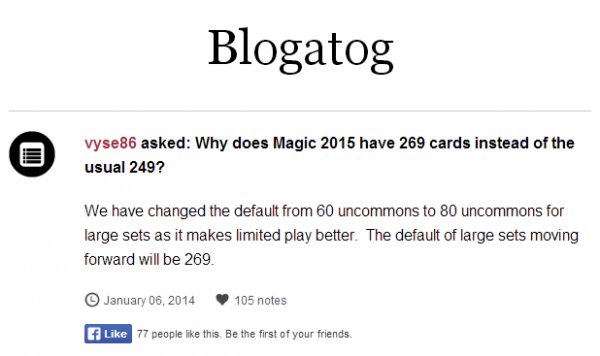 Although this is a change for Limited play, it should have ramifications in the MTG finance world. By making each given uncommon 33% more rare, the upside for uncommons just went up significantly.

This is going to be especially pertinent during M15 spoilers, since retailers won't have had time to adjust to the new relative rarities. If you see a powerful uncommon destined for Constructed play preordering in the 10 to 25 cent range, it may be the best set ever to pull the trigger. Keep an eye out as cards continue to get spoiled from this new set.

I talked a lot about the past and a bit about the future today, but what about the present? Going through Theros block uncommons, the following seem like potential pickups for next year's Standard or eternal formats.

At up to 25 cents, this seems like a buy. If a near-mono-black deck continues to see heavy play in Standard, this will be a key removal spell. It's from small Born of the Gods and already sees a good amount of play.

With the amount of play this saw at the Pro Tour, the fact that it's from Journey Into Nyx, and the relatively low price, this seems like a buy. Maybe it's worth waiting until Conspiriacy comes out to see if more JBT drafts will drive the price down to 15 cents.

If there is a blue control deck that runs counterspells, I am certain this will buylist for more than a dollar next year. Buying in toward the low end of this spectrum seems fine, but I'm not crazy about 50-cent or more copies.

This could be a long-term play for eternal formats, since black sometimes needs this effect to handle weenie decks. There's also a chance it sees play in Standard next year. Despite this, I wouldn't buy in for any more than the absolute low of 25 cents.

With a mana cost of four, this probably isn't seeing eternal play at any point, but buying in for a dime seems like a reasonable play for next year's Standard. If a red deck performs well in the first few weeks and Fanatic is a part of that, it could earn you a little cash. Disclaimer: I have a soft spot for RDW, but nobody else does, so I almost always overestimate the financial possibilities of mono-red cards.

Am I crazy to think this could be a reasonable sideboard card in an aggro-dominated Standard or even Modern format? It's from a small set, and casual players like life gain. This may be a symptom of my tendency to overestimate RDW cards: I also overestimate the hate cards.

Here I go again with the RDW cards. In this case, I think that Searing Blood is an upgrade over Searing Blaze in Legacy Burn decks. What has three toughness in the format? Delver, Stoneforge, Bob, Snapcaster, Deathrite, Lavamancer, Goblin Guide, unpumped Knight of the Reliquary, etc. all die to Searing Blood whether or not you've hit landfall. The price is a little high right now, but keep an eye on this one if it falls to 25 cents at any point.

Finally, it's worth nothing that this card saw four-of play in many different decks at the Pro Tour. The price is so low here that there could be upside, although who knows if this aspect of Theros Block will translate to Standard at any point. I'm not buying in, but I feel like it's worth pointing out.

Do you have any uncommons you think are good picks that I failed to mention? Just think that speculating on uncommons is a waste of time? Sound off in the comments.