One of the most important factors in speculating is buying in at the right time. The problem, of course, is variables. Variables, such as additional printings, playability in different formats, sales of the set in question, and tournament results all influence how a card’s price behaves.

I’m a guy who likes to learn from the past, so I’ve been going over sets from two to four years ago, looking for patterns. We all know that casual cards behave differently than Standard cards, which behave differently from Eternal cards, and so on. But today I am proposing that by identifying which format(s) a card is playable in, we can pinpoint a good time to buy.

Exceptions can be found for every rule, of course, but a starting set of guidelines is necessary before we start getting into those. I’ll provide some examples for each category of card as we go forward. Let’s dig in.

Some cards are appealing to casual players and casual players only. While these cards are in print, there is plenty of supply and the price is quite low. Only after the card has gone out of print do we see growth. Here are a couple of clear examples:

While in Standard, these cards saw no competitive play, and were worth merely a pittance. Since leaving Standard, the cards have both grown several-fold. There is sometimes talk that there are so many dragons nowadays that the casual-dragon premium no longer exists, but when a previously bulk mythic rises above $4 based on absolutely no competitive play, that theory definitely comes into question.

The same argument and counter-argument could be made regarding angels. 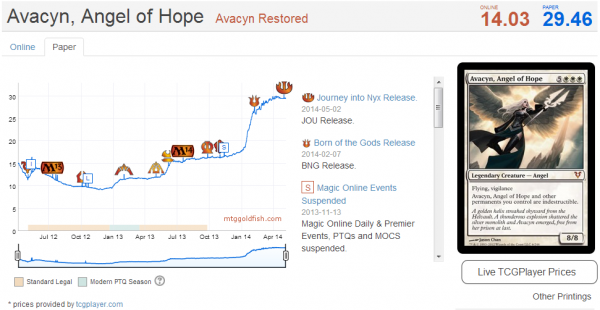 Avacyn started at a high price based on casual demand, never dipped, and has gone up substantially since going out of print. Casual cards are some of the few targets that are often at their lowest prices upon release. However, this doesn’t always hold true, as we can see here:

Chromatic Lantern was quickly identified by the community as a card that could go in every multi-color EDH deck, and it subsequently started at a preorder price higher than any price it has reached since. With an overwhelming supply of Return to Ravnica flooding the market, Lantern fell quite a bit, but now that RTR has stopped being printed, we can see hints of growth beginning already.

Verdict: Casual cards may start a little high due to hype, but they often will be listed at their lowest prices during preorder season. These types of cards will generally be readily available for the entire time they’re printed, but once they’re no longer being opened in packs, look out!

Casual cards from Theros block may not be spiking anytime soon, but beginning to pile them away for a couple years in the future could be a slow-but-steady means to profit.

Some cards are only really appealing for Standard. It’s not that they can’t be or aren’t played in casual formats, but they just aren’t as inspiring as cards tailor-made for casual formats like Commander.

Cards powerful enough for Standard that aren’t good enough for Modern or Legacy are often costed a little too high. Hence, my examples are four- and five-drops. You can’t deny the power of these cards, but they just don’t quite cut it in eternal formats, and thus their prices never really recover after rotation.

Even though some of these have seen fringe Modern play, none have been established as Eternal staples, despite being everywhere during their respective times in Standard. How the mighty have fallen.

Verdict: Some cards derive value from Standard and nowhere else. If you’re speculating, you need to have rotation, the metagame, and the card’s price history in mind.

Standard-only cards are some of the most volatile specs. Personally, I speculate on Standard cards very rarely, only when I have good information that truly leads me to believe that a card is underpriced. Holding these types of cards through rotation is basically just throwing away money.

Some cards maintain most of their value from Standard but also have a good amount of casual appeal. These cards are generally pricey while in Standard, then dip upon rotation. Once the community collectively realizes that these cards are still sweet but supply is dwindling, some rebound occurs.

Most planeswalkers behave this way, as I’ve written about previously. Keep in mind that almost all cards have at least some casual appeal, so a card has to truly be cool and unique to see any bounceback after its Standard heyday is over.

Verdict: If you want a Standard staple for your cube or EDH deck, you should wait until rotation (if you’re looking to buy the card at the cheapest possible price). However, if you get a card like this at a decent price while in Standard, just holding it through rotation for play purposes doesn’t necessarily represent a huge loss.

Some cards are only good in eternal formats despite being available to play with in Standard. These cards act similarly to casual cards, in that they are available for cheap for an extended period. Then they stop being printed and boom, there’s a spike.

The funny thing is that a lot of times, people realize that these cards are going to be really good (or already are), and then they act confused when the card doesn’t spike while still in Standard. Thalia, Guardian of Thraben comes to mind in this regard.

Like with casual cards, these are generally cards to slowly stockpile until the inevitable hit. The important thing is to not get too discouraged in the interim.

Verdict: Start buying these after the initial hype has worn off and supply has met demand. People are often correct in their evaluations of cards, but then forget those evaluations when an immediate spike doesn’t come. Cards made for eternal formats that are largely ignored in Standard will have their day, it’s just that that day often comes later than others.

Eternal-playable cards that also see lots of Standard play are big contributors to why many complain about the expense of competitive MTG. Everyone knew that Snapcaster Mage was going to be a good buy at its floor, but the fact is, that floor wasn’t really all that low.

The community has caught on that some cards will only grow, so a Standard staple that has also established itself as an Eternal-playable will likely not drop much at rotation. In fact, in some cases, we may see growth before rotation in anticipation of the coming demand.

Ultimately, these types of cards need to be taken on a case-by-case basis. You may not identify the floor, or the floor may be brief, or not particularly low.

However, because these types of cards are some of the most powerful, even buying in at a non-ideal price will still often be profitable, since Eternal cards have a much higher ceiling than Standard or casual cards. You may have to invest more dollars into specs like this, but if you have a plan and buy intelligently, they can create the biggest profits.

Verdict: Probably the best time to buy this type of card is at rotation. However, if you had been stockpiling [card]Snapcaster Mage[/cards]s during its time in Standard, you would not be disappointed today.

If you’re time-sensitive in your speculating like I am, these may be the types of cards you hold through rotation. You could maximize value by selling in the months leading up to it and then rebuying, but when every minute counts, big staples like this can create situations where you can be slightly more lazy.

By knowing who the potential crowd is for a spec, you give yourself a lot of information on when to buy and how long to hold. As you’re considering specs in the future, I encourage you to identify which formats the card is good in. Yes, exceptions can always be found, but following general guidelines is a simple way to guide your actions.

One thought on “Insider: The Importance of Knowing Your Speculation Audience”