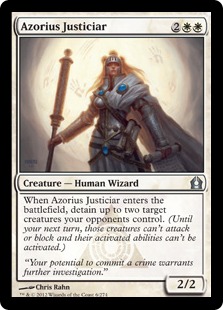 I know these articles are usually more about fun new Standard brews or lighthearted stories, today I want to talk about something both more and less important at the same time.

Wizards of the Coast is suing Cryptozoic, the creators of Hex, for copyright infringement.

Lawsuits are not what we are typically concerned about as Magic players (nor should we be), but it is vitally important to the health of the game as a whole that its intellectual property is protected. I know people are all over the place on the spectrum of whether or not Wizards has a case here, but looking over the specific complaint, it's hard not to see Wizards' point. When cards function basically the same way and even names are lifted nearly directed from their inspiration in Magic (Lifelink vs. Lifedrain, really?), you see where WOTC is coming from.

I know people like to say stuff like "$100 fetches are going to kill Magic!" but the reality is that stuff outside of players' control is more likely to do the deed. I haven't played Hex, but I do play Hearthstone, and while it's not as good as Magic in terms of gameplay it's a heck of a lot more accessible online, and that goes a long way. Wizards definitely can't stop all other cards games from coming out (nor do they want to), but it does seem entirely fair that they don't want something that copies nearly directly from Magic to be out on the streets. And make no mistake, Hex seems more like a port of Magic than an aesthetically-similar game (Giant Growth was renamed to Wild Growth and does the same effect for the same mana cost, for instance).

Of course, I'm obviously not a lawyer, so when I say "Wizards has a case" I mean in the common-sense sort of way moreso than the legal way. It will definitely be interesting to see how this plays out. Any predictions or insight into this one?

13 thoughts on “Wizards of the Coast sues Cryptozoic”