In the wake of GP and PTQ prep, sometimes we forget that Magic is supposed to be fun. Sure it's great to know that Tom Ross won the SCG Invitational with his take on Mono-Red Aggro and that my choice of Mono-Blue Devotion for GP Chicago this weekend seems like great deck selection in light of that information, but there are some very good reasons why you shouldn't forget to have fun playing Magic.

Running my own shop, I’ve come across a lot of new players looking to understand the game or simply learn how to play reasonably well. In a draft players need to use and develop card evaluation, deck building, and fundamental play skills. Any draft format will work, but if you’ve been playing for a while, more skill-intensive draft formats like Modern Masters, Conspiracy, Cube Draft, and most recently Vintage Masters, can help even the best players improve their skills.

With the high power level of Standard in the last few years, it’s easy for newer players to pick up a competitive deck and find some amount of success with it based on the raw power level of the cards alone. Instead of the best decks in the format being extremely skill-intensive like most of Magic’s history, jamming a bunch of powerful mythic rares into a deck can result in free wins. By taking time to have fun with these interesting draft formats, you can expand your basic skills and improve your overall play skill.

If you are like myself and many other players, Standard formats like this one that remain relatively unchanged through multiple set releases can drain your competitive spirit. Don’t get burnt out, have fun!

Vintage Masters is the most fun I’ve had playing Magic in a while. There are so many interesting archetypes you can draft and interesting complexity within each archetype. Although I’ve been preparing for GP Chicago, I have also made time to draft this exciting new set online. One reason it is fun is because it is extremely skill-intensive in all aspects of the format.

If you only focus on one format, your brain can get lost in constantly trying to get an angle on the format. By allowing yourself to think about other formats and interactions and taking a break from Standard, when you reinitialize your efforts often you have a fresh new look on the format. Some of the best deck construction I’ve done has been after finding an interesting interaction in Cube Draft or another format.

In case you haven’t noticed yet, I’ve been playing a ton of this format. In terms of fun, it’s up there with some of my favorite draft formats of all time. In terms of finance, this set is not worth your time. Here’s what I posted on Twitter the other day.

I’ve drafted a number of times after that post and my opinion is still the same. Don’t play this format if your goal is gain some more tickets. However, if you are looking for fun and accept the high price tag, dive in. Beware and tread lightly because this format is highly addictive.

If you are going to get into some Vintage Masters, my draft advice would be the same as that of drafting someone's cube. Step one is develop a plan. You can follow a plan of draft good cards, but that will be challenging in Vintage Masters because the card evaluation skills you’ve developed will be skewed due to most of the cards being pre-Modern era.

The best strategy you can apply is building towards an archetype. Here is a list of some of the best decks you can draft.

These are the decks you are likely to see most often, but Reanimator, Green Ramp, and Blue-Red Tempo seem possible if more difficult to pull off.

There are so many interesting interactions that come up in this format, like Deftblade Elite plus Brilliant Halo to start picking off your opponents’ creatures from the beginning of the game. Even little things like cycling a Noble Templar and then using Breath of Life to bring it onto the battlefield can be powerful. No matter what strategy you employ, make sure you are active in the early game otherwise the aggressive decks will overwhelm you.

Because this format is quite different from what we have become used to, I thought looking at some successful decks might be helpful as well. Here are a couple decks that I 3-0’d with to help give you some perspective on the format.

I did not include the quad Battle Screech deck with Sol Ring because that deck was simply unfair and the only deck that even gave me a fight was the Balance plus Mox Jet opponent, who eventually succumbed to my ‘Lingering Souls’ army. 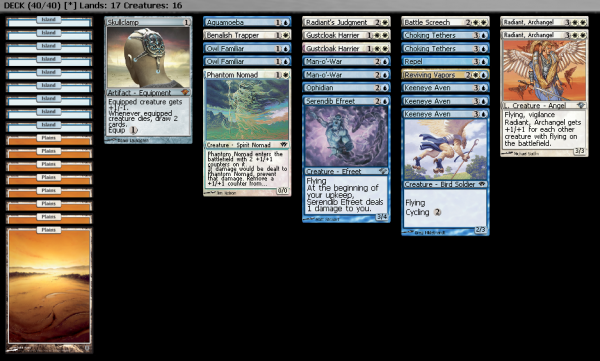 Combining white aggressive creatures with the tempo of blue or the burn of red is a great place to be in this format. Choking Tethers is one of my favorite spells in this format because the cycling helps you stabilize and draw out of a rough spot but it also allows you to tap their creatures to force through damage. Radiant Archangel is an enormous threat that sticks around to block but don't forget that L. means Legendary. As my first pick of the draft, she was the core I built the deck around.

As you can see here, I chose an unusual combination of colors for this draft format. It's not often you will see madness combined with red in this format because there is no support from the red side. Red does provide a deep color to pull from though and when Goblins did not work out, I was able to snag some late green cards and add in a powerful angle to my red aggressive deck.

Overall, Vintage Masters, while a drain on your wallet, is a fun and skill-intensive format. You should definitely make time for this one of a kind draft format.

3 thoughts on “Insider: Don’t Forget to Have Fun”