I've gone into a lot of detail about the time I put into buylisting, but this week I wanted to try a different direction and see how it went. I spend a lot of time every week buylisting cards which involves sorting and alphabetizing and listing them. It requires a lot of referencing and since the prices are relatively kinetic, it doesn't involve a ton of memorizing because referencing is more effective and less likely to give you a false read. Still, buylisting is not the only activity that benefits from referencing.

I spend a significant amount of time each day checking the "market" to see which cards are trending upward and which are trending downward. Some price swings are profound and don't leave much time for you to benefit but can signal coming moves on other cards. Some price moves are very subtle and can serve as harbingers of more pronounced changes to come. I wanted to look at some of what went on this weekend with prices and see if there are some lessons we can learn from the data.

This week's article is a bit of an experiment in new formats for me, so if you like it, let me know I should do more. If you hate it, let me know that, too, and I'll hit you with some more solid buylisting advice next week.

It's good to get into the habit of checking card trends every morning and maybe this will get you in the habit. Without further preamble, here's what I came up with.

This weekend, Sliver Overlord from the premium Slivers deck went up nearly $4. This seems like a "whatever" sort of a move at first, but it's more interesting than all that if you give it a little credit.

First of all, this is significant in that the price for this premium deck foil with its inferior foiling is approaching the price of the set foil. Typically, cards like this settle between the normal set card and the set foil, and for sets as old as Scourge, it's typically closer to the non-foil. Indeed, Overlord sat very close to the non-foil for a long time. Until last summer, this version was actually cheaper.

It's incredibly significant for a premium deck foil to be the same price as a set foil. That is a very strong signal that EDH popularity is having a profound effect on the market. While the Scourge copies have barely increased by a dollar in the last two years, the premium foil has gone ballistic.

So while this is an obvious signal that EDH players want foil copies of a potential general, is there anything else that we can still invest in? I think if this card is a popular general, the non-foil staying stagnant may not continue. I think trading for them at $5 seems okay.

But the margin is higher for foil EDH cards, especially generals, and since generals are non-four-ofs, it's tougher for the price of a non-foil general to go out of control. Does this increase signal anything else? Well, if it signals that cards from premium decks can approach the price of set foils, we'd see that in other premium deck cards. Are any other slivers on the move? 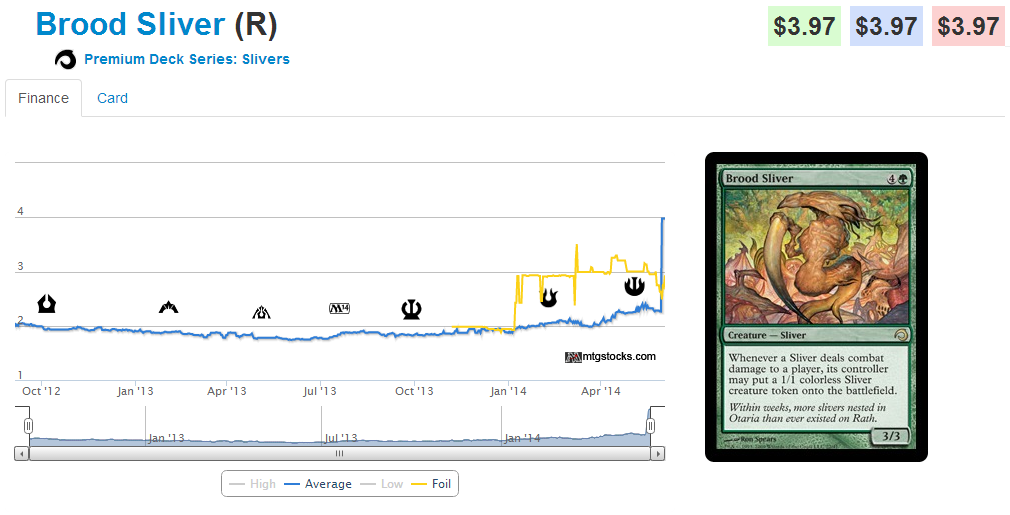 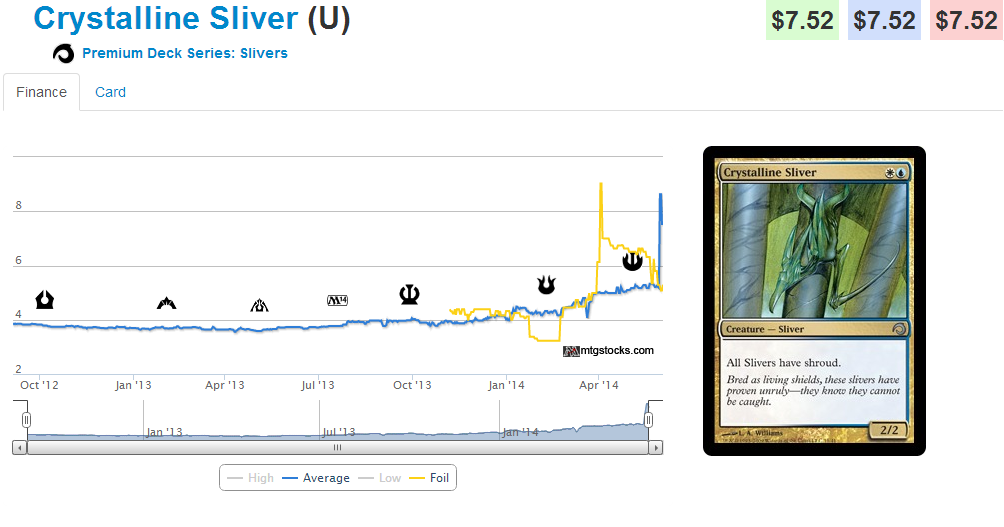 What could be causing this? A buyout? Scarcity? What we do know is that the conventional wisdom that premium foils more closely adhere to the non-foil price may not be such a rule.

I don't expect giveaway foils like Wurmcoil Engine or Restoration Angel to follow this trend. Also, the other all-foil premium deck, Fire and Lightning, didn't contain many cards with set foils to compare to for the decent rares.

Future all-foil offerings may be good early buy-in opportunities. A sealed Slivers deck just sold on eBay for $150. This is a real bucking of established historical trends and things like this are worth noting. 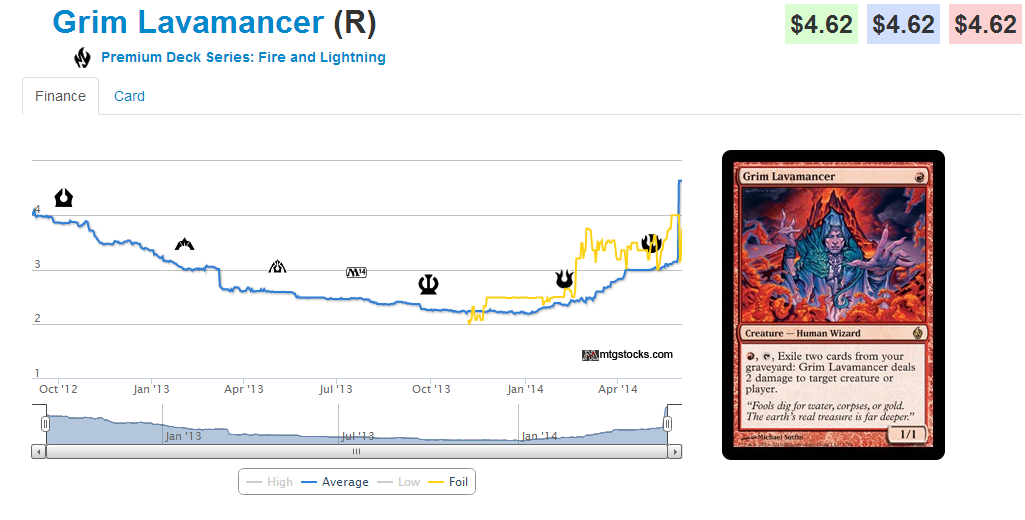 This trend falls apart a little when you have a card like Grim Lavamancer which has a $70 foil in Torment. Still, compared to the M12 foil on this chart, the premium version shot up this week. It seems like a lot of premium, FTV and other foils all went up at once.

Could this be the result of a buyout or a correction? It's hard to tell, but playable foils from premium sets are no longer the dogs they used to be. Even "bad" sets like From the Vaults: Legends saw quite a few increases this week. 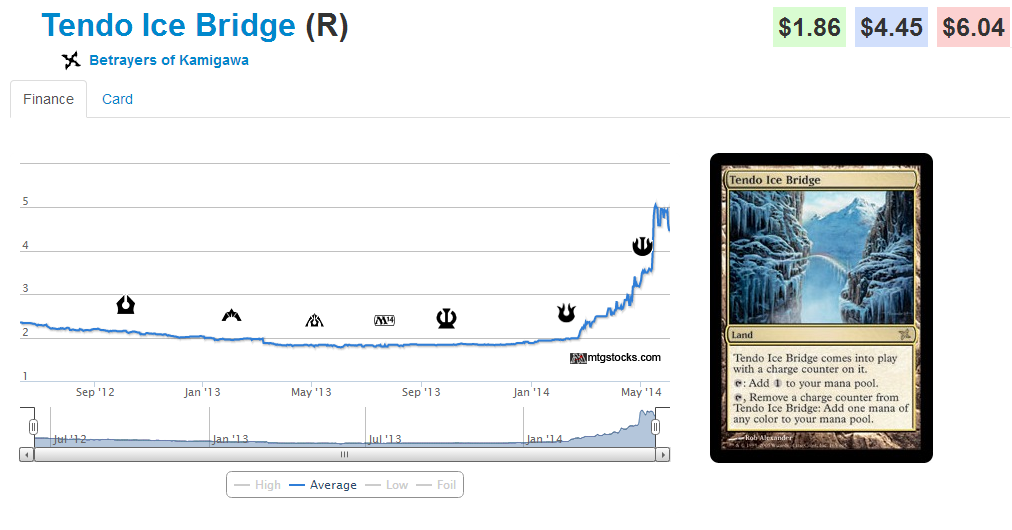 This trend is very interesting to me because this card is not good. It gets play in Modern in the Amulet of Vigor deck because you're able to return it with your bouncelands and replay it with cards like Azusa, Lost but Seeking and Summer Bloom, but in all other cases, this card is a dud.

The price increase seems entirely driven by speculation, but the ease at which a fringe card like this was driven up seemed based mostly on the low stock. Cards that don't seem like they are worth stocking are ripe candidates for this kind of buyout behavior.

A card like Amulet of Vigor had seen some play with previous iterations of the deck and stores were jammed with them after trying and failing to make money flipping them before. When Amulet spiked, old copies were dug out of bulk boxes, binders, and other places. When Amulet spiked again, everyone was ready because so many copies of it were loose and accessible.

Ice Bridge, on the other hand, was mostly socked away. With so few copies for sale, the price was vulnerable to a buyout, and any modicum of adoption was enough justification for a run on the card.

I imagine that copies priced at $4.50 or so are selling very poorly. Still, the things that differentiated Tendo Ice Bridge from a card like Amulet of Vigor can help us identify future cards that may behave in a similar fashion. A few criteria I could come up with are as follows.

If you look at a card like Sylvan Safekeeper, which seemed like a good spec when it first saw a blip in adoption in a Legacy sideboard, it doesn't really adhere to the list I came up with based on the weird spike in Ice Bridge.

Safekeeper was a one-of in the board, there were a lot of them in stock because it had been played quite a few different times in Maverick and other Legacy decks. More copies of Safekeeper were in stock in stores and that made it tougher to buy out and tougher to nail down enough copies to keep people from restocking at the old, low price. 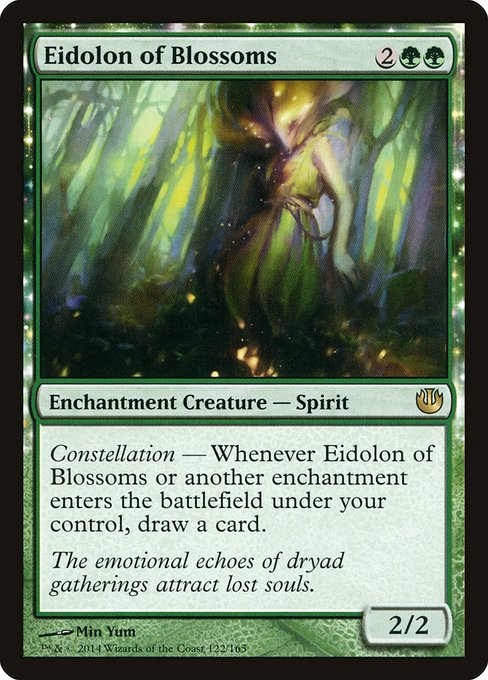 Here's a card that saw a pronounced decrease in stock on TCG Player. The price hasn't caught up yet, which means there is opportunity here. I am bullish about this card just because I think it's a powerful effect. Powerful effects may or may not pan out, but if they have a strong showing in a block event right after the set comes out, people are going to buy in to brew at least. Eidolon of Blossoms has a long time to do work and these are disappearing across the net, which is a good sign. 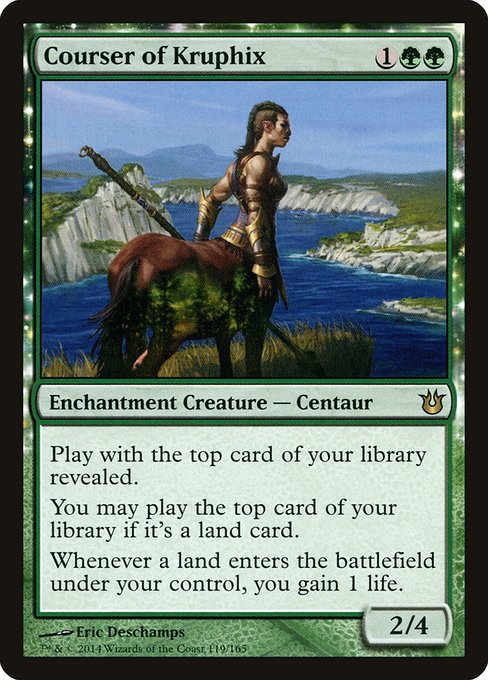 Courser is another card that has gone up a ton. It's probably too late to buy copies of this priced correctly, but we can learn quite a bit from this card regardless.

When Born of the Gods came out, it was clear that it was a small set with very few good cards. I anticipated a card like Spirit of the Labyrinth maintaining its inflated presale value. I was right about the effect of a card from a bad, small set mimicking Voice of Resurgence, but was way off base about that card not being Courser.

Playable in Modern, an all-star in Block and almost guaranteed to continue to impact Standard for another year, this card is a solid place to stash value.

It does follow the trend of Standard cards having a roughly 40% spread, which makes me want to try and buy a ton of these for their $10 buylist price and trade them for their $15ish retail value. If you pick up cards that haven't spiked yet or which have a much lower spread you can easily turn that initial investment of $10 per card into $12-$14 buylist just trading straight across. Dealers seem to have quite enough copies despite the recent price hike or the spread would not be quite so high.

This has room to grow, but I doubt it will be quite as ubiquitous in Standard post-rotation as it was in Block and the high spread coupled with the recent price peak makes this a good candidate for trading out. 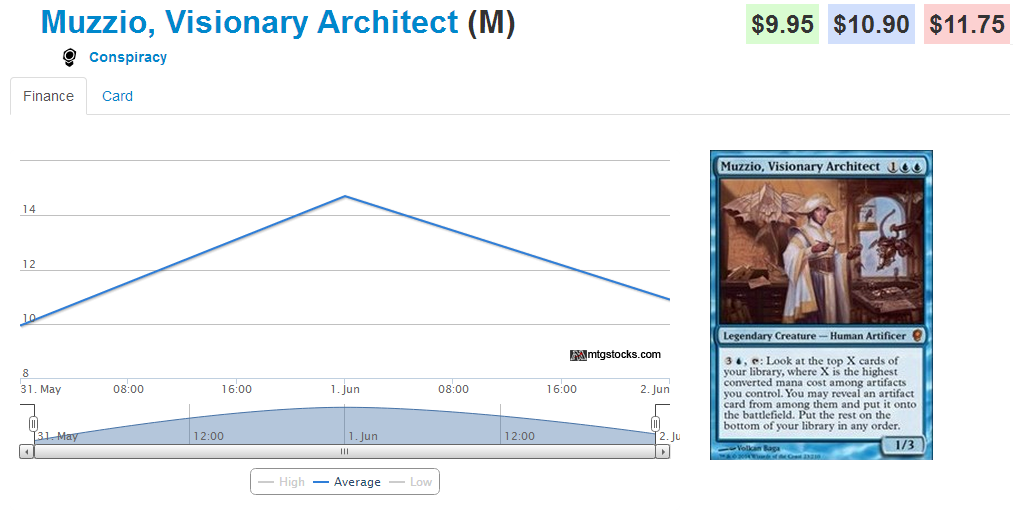 Muzzio didn't suddenly get worse. The set, however, suddenly got better. The spoiling of cards like Stifle, Pernicious Deed, Mirari's Wake and Edric, Spymaster of Trest took a lot of pressure off of cards like Muzzio. The EV of the set overall didn't change, but the amount of slack some of the newer cards had to pick up shifted.

If these cards can slip down so much on a whim, expect them to tank even more after the set has been drafted for a while. I am not bullish on picking these up for a long while. By "these" I mean Muzzio, Marchesa, Selvala, Brago and Grenzo. Brago seems like it can do a decent job of maintaining price but even a card as powerful as that is not impervious to the effect of so many packs of this set being busted in drafts. Let Muzzio represent this entire new cycle.

The cycle of "old" cards in gold in the set like Edric, Spymaster of Trest and Basandra, Battle Seraph are liable to tank a bit. Edric especially is on an artificial high right now after a good showing in Legacy, and this should cut him down to size. I wish I knew a way to short Magic cards. 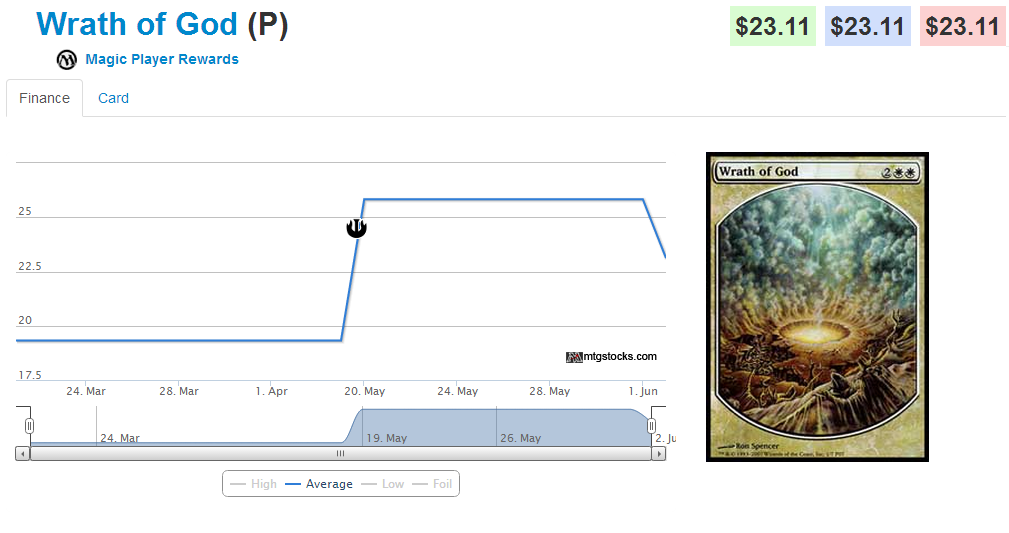 If I had to guess what caused this, I would say it was the announcement of FTV Annihilation and the spoiling of the new Wrath of God art in that set. The textless player rewards cards have been very solid gainers of late, and there's no real reason for this to eat it this hard. Still, let's not panic until it reaches its pre-May levels. This may be a correction for an artificial spike.

8 thoughts on “Insider: The Biggest Loser (And Winner)”