I live in Oklahoma, in case you didn’t know. It’s a forgotten little state in the middle of the country, but it actually has a lot going for it. Extremely low cost of living is one, having a local outlet to sell bulk rares at a quarter is another, the weather is nice minus the summer and the tornadoes, and hey, we do have the Thunder and Kevin Durant.

Now we also have Earthquakes. Oklahoma City, where I live, has a fault line running directly underneath (in fact it passes right under the intersection of I-35 and I-40, two major highways). Anyway, earthquakes didn’t use to be a big deal since they were extremely rare.

Then came the next big energy boom, and fracking (basically blasting tons of water into rock deep underground to magically create oil) took over the state. Fracking has been blamed for the earthquakes.

And no one here cares. Social media blows up about it and it’s kind of fun to pretend you’re on the moon bounce for a few seconds. But all in all, no one cares and no one is taking earthquake insurance.

Unless it comes to their door and causes damage, that is. If a big one comes along, we’re pretty much screwed here. But hey, until then who cares? These are the same people who hear the tornado sirens go off and run outside to catch a peek at the tornado before taking shelter.

Modern is Oklahoma, the recent SCG announcement is the tornadoquake (actually a thing that’s happened here), and the players are the ones dancing around outside taking it all in.

I’m serious. My piece last week about the continuing downward trend of Modern staples went against the grain and against expectations of Modern PTQ season, but I think a lot of you agree with me that with every passing day the data agreed with me more and more.

Then the ground shook. 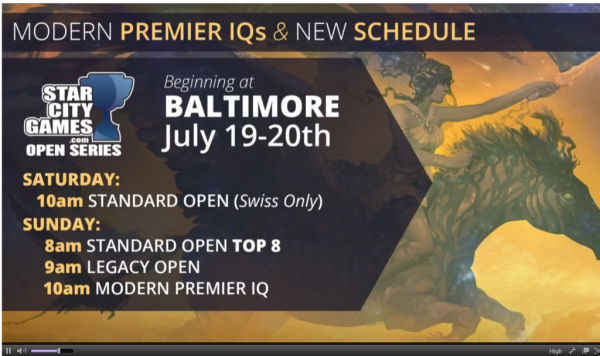 I spoke last week of a catalyst for Modern prices. An event that would stop the downward trend and take us back to the wonderful wilderness filled with nothing but tripling prices and charging bulls. I laid that event out as being the reintroduction of fetchlands or some other landscape-altering event.

A few days later a would-be catalyst seemed to drop out of the sky. There’s been talk of SCG diving into Modern forever, and then it finally happened. Surely, here we had our catalyst to take us back into the money!

And I can’t deny that it’s sound logic. So, edging on a week later, where do we stand?

Okay, so that’s one card. Maybe Modern as a whole is different. 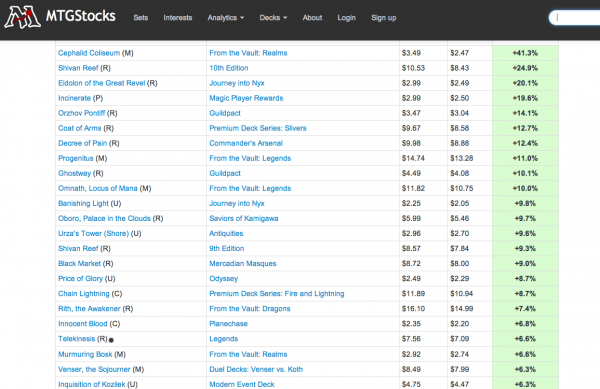 Or not. I count about three cards on that list moving due to Modern, and one of them (Inquisition of Kozilek) is only moving because it’s readjusting after a reprint. The other two are a nice sign, but I would argue that even Orzhov Pontiff is there mostly because of its ability to interact with True-Name Nemesis.

For a format that’s supposed to be undergoing a resurgence, if not due to PTQ season then due to the SCG announcement, it sure seems pretty lifeless.

I’m not saying Modern is dead or that the announcement from SCG means nothing. I think it will slow down the decline of cards during the next few months, but I don’t think we’re going to be seeing an immediate across-the-board correction upwards.

Like the earthquakes, no one is going to care about the announcement until it arrives on their front door. A year into SCG’s Modern season, I’ll buy that a fair number of players are playing who wouldn’t otherwise due to the series. That certainly will help to buoy prices moving forward.

But the announcement alone? That will do approximately nothing to change the current course we’re on. The first SCG Modern event isn’t until a month from now, and by that time we’ll be nearing the last part of the Modern PTQ season.

This is a big a deal. It’s a great sign for the format moving forward. I want to have Modern stock for the future. But I don’t think it’s enough to stop the downward trend we’re seeing. The people who want to play Modern right now are playing Modern right now. The group of people who want to play Modern when it becomes more accessible are still waiting for the fetchland reprints.

In a way, I’m glad SCG made this move. Not only do I consider it good for the game, but the fact that prices haven’t changed their course even a little makes me even more confident in my call last week: Modern will continue to trend down until we see a mass easing of card availability, most notably the fetchlands but possibly something else like Tarmogoyf.

And we still don’t know when that will be. But we do know it won’t be this summer, which means at least two or three more months of dropping prices before fall set spoilers trigger this theorectical run on Modern. And that’s a best-case scenario. If fetchland reprints don’t come until the hypothetical Modern Masters 2 set in Summer 2015 that I’ve been predicting for a year? Then Modern prices are going to continue to slide until the calendar rolls over to 2015, when prices historically tick upward across the board.

Again, I want to be clear: I’m not telling you to sell your Modern cards. I don’t know how big the drop will be by the time it bottoms out. My gut says that it won’t be so much that selling everything now and rebuying later is the absolutely correct play. But I do know I wouldn’t be acquiring more Modern staples at current prices, and I’ll be intently watching the market to find signs of life.

After all, the ground is always moving beneath our feet. It’s our job to listen to the rumblings.

7 thoughts on “Insider: The Ground Shook. And No One Cared.”