In last week's article, I covered the history of why picking up Modern staples while Standard-legal or immediately after rotation is a good long-term move that can allow for better trades with Standard- and Limited-only players. I also went through Return to Ravnica block cards that fit this category.

Today we’ll be covering M14 and Theros block. But first, if you haven’t read part one from last week, please do so here.

Mutavault is a post-rotation target. Its price is driven by heavy play in Standard right now, so I would be looking to sell copies, not buy in.

Keep an eye out, though, because this has a lot of upside if its floor is low enough. It was a $40 card before the reprint, and fell all the way to $15 before it started seeing heavy play in Standard. If it dips below $15 after rotation, this will be a snap-buy. In Modern (and Legacy), it mainly sees play in Merfolk decks, but the power level and adaptability of this card will always be pertinent. 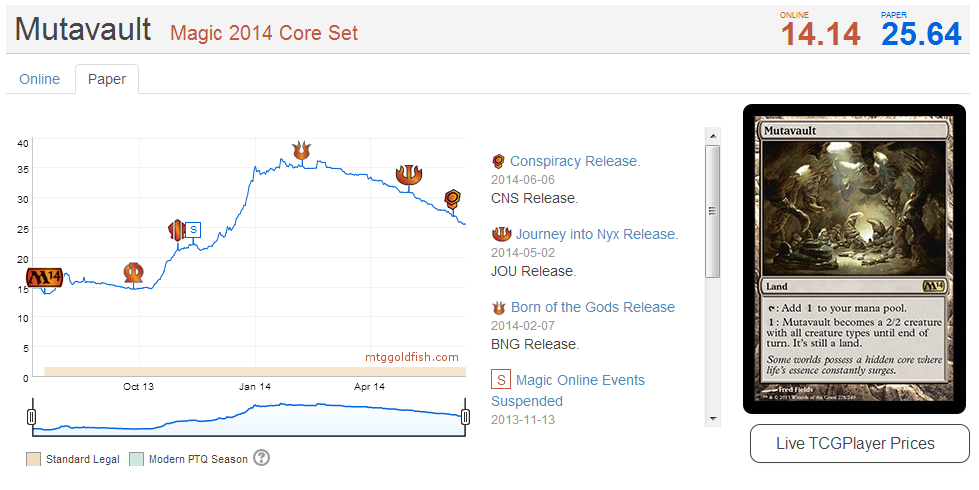 Scavenging Ooze, on the other hand, is a great target at its current price. Seeing both Legacy and Modern play, this little two-drop is at an all-time floor and should only go up from here (although it does see some Standard play, so it may dip a little more at rotation.)

Given what happened with Innistrad staples, though, I’m guessing the community at large will be sharp enough not to let this fall much, if any, further. Trade for them all, and if you have some spec money you’d like to invest, you could do worse than putting it here. 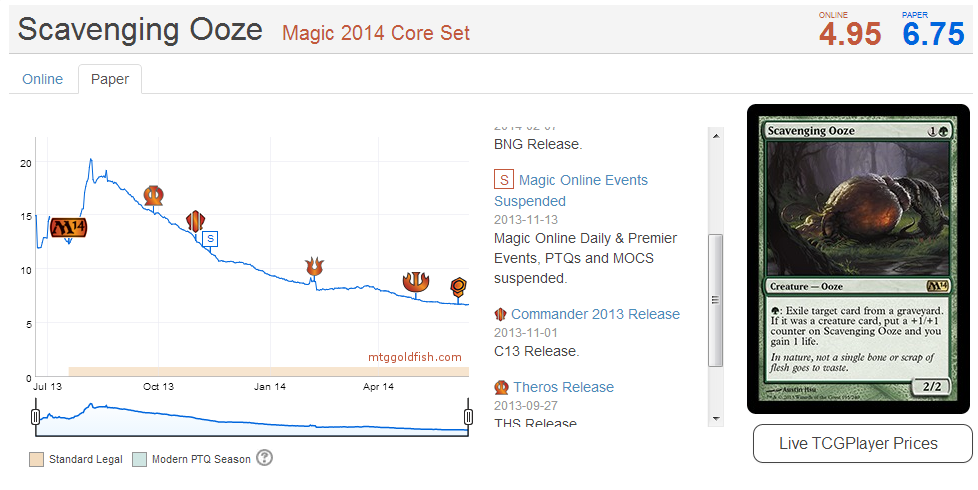 Young Pyromancer is getting more and more popular in both Modern and Legacy, but as an uncommon already over $2, the upside is limited. Still, if this isn’t printed again soon, I could see it hitting $5 before too long. I’m waiting for M15 to be fully spoiled before I trade for copies, though. A cash buy at $2 seems wrong.

Anger of the Gods is truly a great pickup (it’s the card I alluded to in my conclusion last week). Sitting at around $1.50, this card was one of the most-played cards at the last Modern Pro Tour. If it sees heavy play in next year’s Standard, this could pay off sooner than almost any other card I’ve mentioned in the last couple weeks.

If not, it will still pay off in the long run. I think it’s a cash buy if you can get in at $1 or less. My only concern is that it’s a rare from a large fall set, but that fact is why it’s so low right now. The ceiling is lower, but so is the floor, so I think it’s a great card to just start stockpiling away for a year or two. 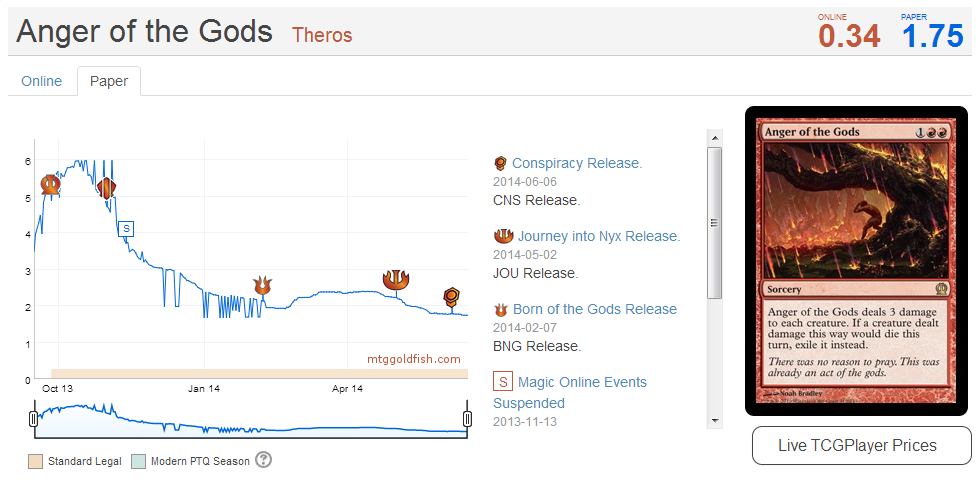 It’s hard to imagine a card that is more of a staple than Thoughtseize. Seeing heavy play in all kinds of decks in literally every competitive format, this card is everywhere.

Before its reprint in Theros, the original printing was closing in on $70 retail. Now at around $17 (for the Theros version), it’s hard to pinpoint where the buy-in price is. With Mono-Black Devotion running the Standard table for the last year or so, the price is certainly driven at least in part by Standard demand. But it hasn’t dropped off in Legacy or Modern, so the pull is coming from many different directions.

On one hand, Theros is not going to be drafted next year, so the floor may be whatever its price is when M15 is released. On the other hand, Standard-only players are likely to sell off a whole lot of copies when Theros rotates.

I could see this going up, down, or sideways from here, so if you have any insight on the matter, please speak up in the comments. In any case, we can expect that two to three years from now, almost any post-reprint price will look like a good buy (assuming no other reprint in that time). Trading up into copies with Standard cards doesn’t seem bad at any price.

Many of the cards I’ve mentioned so far are good in both Modern and Legacy, but a few seem to be specific to the older format.

The best example is Deathrite Shaman, which was good enough to earn a ban in Modern. According to MTG Goldfish, DRS is the most-played creature in all of Legacy, and for good reason—it ramps, kills opponents, and messes with clocks, all while providing maindeckable graveyard hate.

Without Modern driving demand, the upside isn’t as high as it used to be, but there’s still a long-term opportunity here.

Stoneforge Mystic, the second-most-played creature in Legacy, is also banned in Modern, and it recently jumped from its long-standing price around $10 to $25. Shaman is from a more widely-opened set, it’s true. But Mystic was printed as a two-of in an Event Deck, which mitigates that difference somewhat.

Deathrite Shaman is definitely a long-term hold, especially if it takes as long to spike as Stoneforge Mystic did. While I don’t want to tie up cash for several years, this seems like an awesome card to trade toward until the inevitable payoff. I can’t imagine it will dip much at rotation, but keep it in mind when Khans of Tarkir is the only thing on players’ minds.

I’ll close today with three Standard cards that have made at least some impact in Legacy, but don’t really reflect that in their prices.

Eidolon of the Great Revel has been getting some buzz in the finance community because of its success in Burn decks. These aren’t the most popular or successful decks in the format, but as a good budget entry option, Burn cards will always have some demand. This can hardly be considered a staple of the deck just yet, but the outlook so far is good.

Spirit of the Labyrinth is a nice little addition to Death and Taxes. Flashing it in off of Aether Vial against an opposing Brainstorm is just back-breaking.

At $1.50 retail, it’s hard to imagine this card going much lower. With a pertinent ability and a respectable body for its cost, this will be a good hate card moving forward. It’s only a rare, but it’s from a small, unpopular set, so supply is limited to some extent.

Thespian's Stage has won some events combined with Dark Depths, but it’s also a solid casual card that can go into any Commander deck. I don’t expect this to hit Vesuva-level prices, but I’m pretty confident it will be a $5 card a year or two from now. This is one of my deeper budget specs and I’m looking forward to doubling up or better down the road a bit.

As I’ve related before, I prefer long-term holds to short-term specs. I don’t like to have to be on top of every spike to make a profit, so I choose cards that should increase permanently, but might take a while to do so.

Very few Standard cards fit this description, but as a Draft enthusiast, I don’t always see good Eternal cards in binders at my LGS. Slowly picking up underpriced Modern and Legacy cards while their sets are being drafted is a great way to stretch your Standard stock into something with a little bit more longevity. Just be careful with cards that are also heavily played in Standard, as there might be a better opportunity to buy in when that demand is no longer present.

Have some cards you’re slowly stockpiling for the future during their Standard tenures? Please share below!

2 thoughts on “Insider: Why Speculate When It’s Already a Staple? (Part Two)”