Being involved in MTG finance doesn’t have to involve speculation. With a little time to spare and some patience, we can focus our trades on a particular subset of cards that are virtually guaranteed to provide returns—but only after a decent amount of time has passed. This is also a great way to make trading with Standard-only players more productive.

Stop Being So Cryptic

Your wish is my command: today I’ll be discussing Modern staples that are currently Standard-legal. Today’s article isn’t about speculation, so we’ll only be going over cards that are already staples in the Modern landscape (as well as Legacy, in some cases). Before we discuss the cards of today, though, let’s briefly go over a little recent history to show why this is a viable long-term strategy.

Obviously, the most famous examples of Standard cards that eventually grew to insane prices are the Zendikar fetch lands, but as an Insider, you know all about those. Really, I like this one even better: 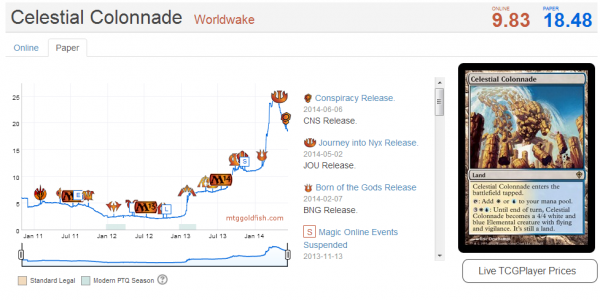 From its low of $2 to its current price near $20, Celestial Colonnade has seen 1000-percent growth in the last couple years. If you had been trading for copies during and especially immediately after its time in Standard, you would be pretty happy right about now (or a while back when you sold for a healthy profit).

From Rise of the Eldrazi, another obvious but slow-to-hit staple was Splinter Twin, which was available for $4 within the last year but now retails for over $20. This has been the key piece and namesake of one of the premier combo decks in the format since its inception, and there was plenty of time to slowly acquire these before the spike. 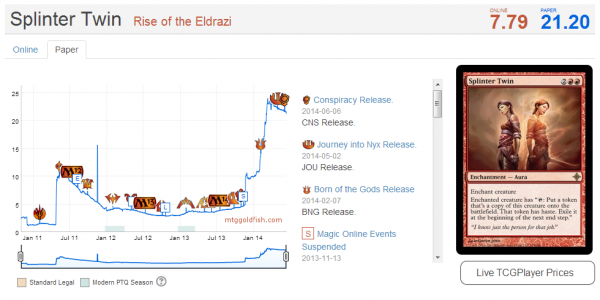 Insiders have been on the fast lands since Scars rotated out of Standard. They’re now finally starting to grow after a couple years of stagnation, which further illustrates my point: sometimes the most obvious buys take a while to see an increase, but it will happen eventually. What about this one? 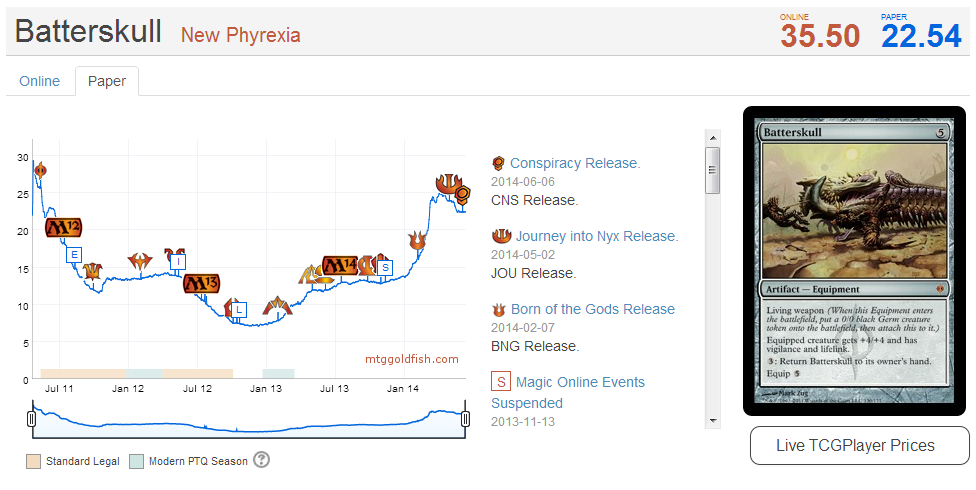 Batterskull sees more play in Legacy than it does in Modern, but the low of $6 it saw was not at all a realistic long-term price. The fact that it’s usually played as a one-of is mitigated by the fact that it’s a mythic from a small spring set. It didn’t take long at all for the price on this one to start correcting.

Innistrad’s rotation was a weird time. Due to the proliferation of finance content the last few years, the average player is becoming more finance-savvy, and this started manifesting itself around this time. Cards like Snapcaster Mage and Liliana of the Veil didn’t dip as much at rotation as the finance community anticipated.

There were still opportunities in the block, though. Craterhoof Behemoth is often the finisher of choice in Legacy Elves decks, and it saw some real growth after a few months as near-bulk mythic. 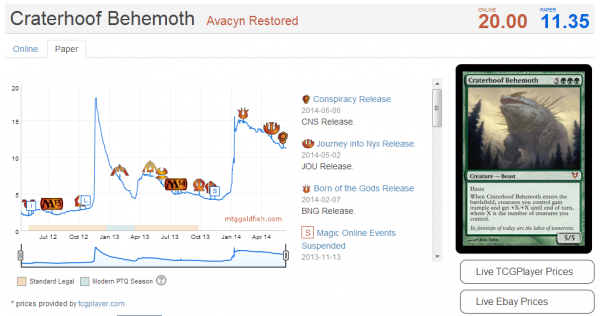 Griselbrand and Cavern of Souls were also good buys after rotation, but again, they didn’t really drop as much as most were anticipating. This was definitely a transitional period in the MTG finance community, but it doesn’t mean the opportunities are gone.

Like I said, I don’t really consider the cards in today’s article speculation targets. I’m interested in what cards are in Standard right now that are without-a-doubt Modern staples. These could take a year or two to hit—in fact, I anticipate they will, based on what we’ve seen historically. But if your LGS mainly supports Standard and Draft players, these are cards you’ll find in their binders that are worth acquiring for long-term holding.

As we’ve approached rotation, the shocklands have been slowly increasing in price. If you’re like me and made these your principle trade target while RTR block was being drafted, you’ve been disappointed with the mono-colored Standard that has kept these basically at the same level as your acquisition price. But it sure does help me feel better that the buylist prices has been going up as these get ready to rotate.

Will they go as high as the fetchlands have? Almost certainly not. Fetchlands are needed in Legacy, fewer were printed due to the smaller playerbase of the Zendikar days, and shocklands aren’t always a four-of in Modern.

But the trajectory of recent days and the growing popularity of Modern will almost certainly make these look like great acquisitions a year or two down the road. You may not want to tie up cash that long, but making trades for these is a solid choice for your portfolio.

Also a Legacy staple, Abrupt Decay is already on its way up. Jason Alt has been touting this one since it was $4, so if you’ve listened to him in the last couple years, you’ll have a pile of these ready to go.

Is it too late to buy in? It’s obviously too late to maximize profits, but the power level of this card will make it a staple in both major eternal formats moving forward, so I’ll still be scooping these out of trade binders at the current price—especially if I’m trading Standard cards for copies. 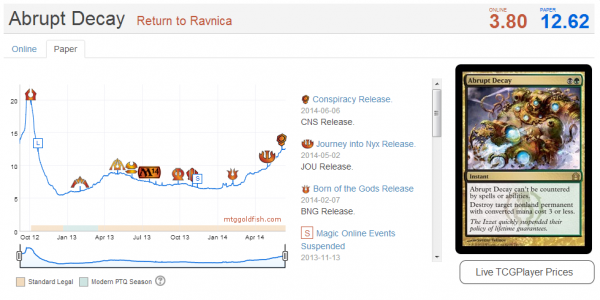 Dragon’s Maze being such an awful set gave us this little case-study of weirdness. It has seen almost no play in Standard since Theros was introduced to the format, so its current price at just above $20 (which is its lowest price since preorders) is almost entirely due to Modern demand. It’s also due to the fact that something has to provide value from Dragon’s Maze, so it might as well be the Eternal-playable. 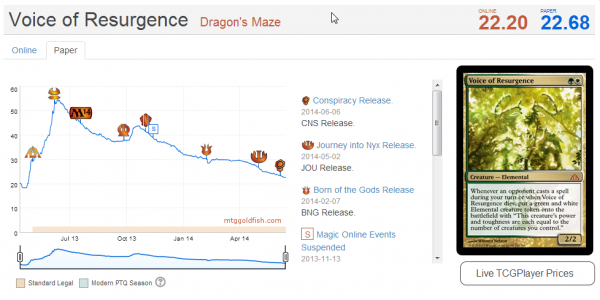 Voice mainly sees play in Pod (and some Hate Bear variants), so my biggest fear with acquiring these is a Birthing Pod ban. Short of that, I wouldn’t be surprised to see this reach its previous ceiling in the upcoming years.

Still, the current price is a tough pill to swallow for a long-term hold. If I acquire any copies, it will be because I’m actively looking to trade away something or am being allowed to trade up. I don’t expect this to drop much, if at all, at rotation.

Control decks are a relatively small part of the Modern metagame, so neither of these quite made the list of the top 50 format staples on MTG Goldfish. Their current prices are due to Standard demand more than Modern, so I mention them briefly here to remind you to keep an eye on the post-rotation price. They’re not acquisition targets right now, but they might be in a few months.

I’m going to need more space than I have available to cover M14 and Theros block, so join me next week when I jump into our most recent sets. One card in particular seems like a fantastic target to me, but you’ll have to check in later to find out what it is. Thanks for reading!

Kelly called me out for not including pictures in last week’s article about organization, and he was right to do so. I’ve included a couple pictures below to illustrate the usefulness of some points I made. Make fun of my handwriting all you want—it's nothing I haven't said myself. 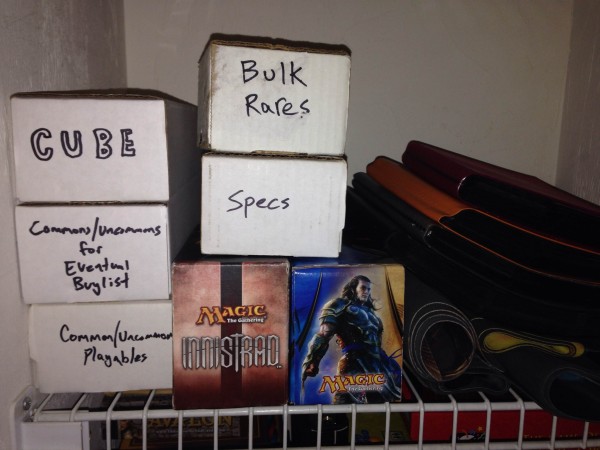 Except for a box of random MTG-related junk and a longbox of basic land, this is my entire collection, all stored on one shelf, labeled for easy access.

Not mentioned in last week’s article is the Innistrad fat pack box, which holds three deck boxes: one with empty sleeves for drafting, one with pre-sleeved lands for the same purpose, and one with my Commander deck. The Gideon box holds assorted sleeves and toploaders.

By keeping everything in one place and carefully labeled, I am able to access anything in my collection with speed and accuracy. Normally, there would be one more box here to hold common/uncommon bulk, but I just sold that box last week on Craigslist. 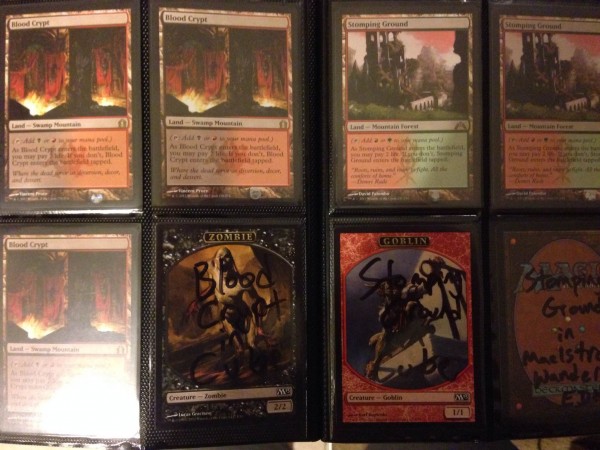 I mentioned last week that I filled in empty slots in my playset binders with placeholders indicating where in-use cards are located. An example of that is above. I can’t stress enough how useful this practice is.

I’m a little OCD in my organization, so it really kills me to just have a blank spot in my playset binder: do I own a fourth copy? Where is it? And how ugly does this blank spot look? By labeling what and where the card is, it makes it easy to locate, fills in those hideous-looking empty slots (though you could argue the placeholders aren’t so pretty themselves), and gives me assurance that, yes, I do own a playset.

It’s definitely a lot cheaper than maintaining five or six copies of a card in my collection. Instead, I get to ship those extra copies off and buy new cards (or, you know, non-MTG-related stuff).

One thought on “Insider: Why Speculate When It’s Already a Staple? (Part One)”