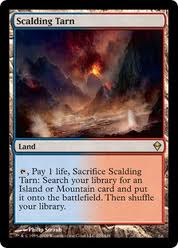 This is a question that comes up regularly enough, but one I think is always worth addressing. This time it comes to us from user /MasterNeo27 on Reddit. The question: When slowly buying a deck, is it better to buy the expensive lands first, or the expensive spells first?

It's a question that doesn't have an easy answer, and most of the responses here seem to be leaning toward "it's a balance." That said, when it's one or the other for a player building a new deck, "it's a balance" doesn't really help.

So what is the right answer? Again, I'll join the "it depends" chorus, but with a qualifier. Suppose you're building, as the example in the question posed, Splinter Twin in Modern. Do you buy the fourth Scalding Tarn or the fourth Splinter Twin first?

I'll try to sum it up like this. If you're playing a focused deck like Splinter Twin that really needs the Twins to work, I would absolutely prioritize that over land. After all, adding the fourth Twin means a lot more in consistency than adding the 23rd land. Plenty of players across Magic get by in two-color decks just using basic lands. While obviously that's a little different in Modern, you need to figure out which has more of an immediate impact in your deck than any hard-or-fast rule of spells or lands. For instance, if you're running a three-color UWR deck in Modern, that fourth Arid Mesa probably means more than a second Sphinx's Revelation.

5 thoughts on “Lands or Spells?”