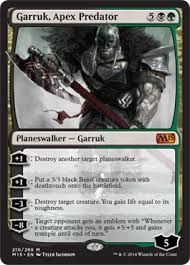 "I typed "Ape" into the Crystal Ball on the Mothership and it came back with one result. Kird Ape reprint confirmed!" - A conversation I wish had taken place

I miss that crystal ball. The "ape" in "apex" faking everyone out would have been funny in hindsight. As it is, let's show the apex already. 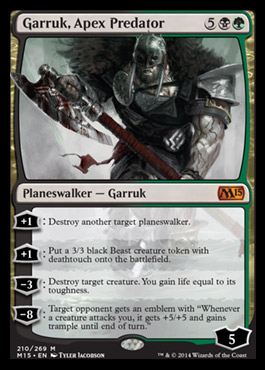 This is a thing.

I was a little morose earlier because I didn't think that the "souls" cycle was going to be enough of an impetus for casual players to pop boosters.

Even if they don't care about the other 'walkers, which I think they will, holy damn. This card is going to sell boosters to the hoopleheads.

I like how Garruk is naturally hunching to fit his tiny art box. There's a lot of text on this card.

At the risk of being accused of comparing this card to Jace the Mind Sculptor, they do both have 4 abilities. That's probably where the comparisons stop.

A more apt comparison is Nicol Bolas, Planeswalker. Vorthos nerds sniffed out the truth of this card's printing weeks ago; congrats, nerds. You were totally right.

This card is going to presell for more than it should, but I don't know that the price will come down. This may be the chase card of the set, irrespective of playability. Don't expect to make much money on these if you do anything besides busting them in packs. 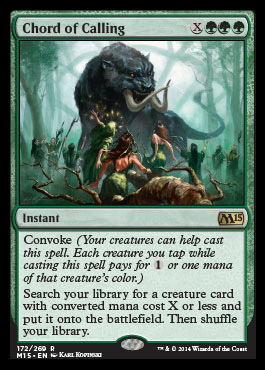 Card Kingdom is buying these for $25. It's too late, they won't get there in time. Unfortunately this card was spoiled too late for people at the GP to sell to dealers and I bet buylist prices on this guy tank. If you have them, you're probably boned. Still, the Ravnica border could command a premium so don't fire sale these. They'll trade well, Standard play will stabilize the price (don't fool yourself - it's going to "stabilize" it well below its current value) and your Ravnica copies might get a "novelty" bump. I expect this to be less ubiquitous in Standard than Thoughtseize so I think that's a poor corollary to check price trajectory if that was your inclination. Sorry about your luck if you have a ton of these, but Wizards has demonstrated a willingness to reprint Modern cards, and the spoiling of Convoke as a mechanic was a clue a lot of people missed when they reasoned that the spoiling of Exalted as a mechanic didn't herald the reprinting of Noble Hierarch. Buylist numbers on Chord  were unperturbed by the spoiling of the convoke mechanic in the set. Don't expect that for M16. 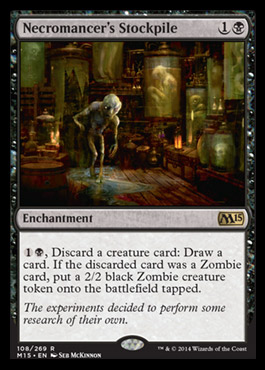 I love this card. I have to keep reminding myself that Bloodghast isn't a zombie. Still, the synergy between this card and Bloodghast is evident when you think about the rest of the deck and how 'Ghast surely makes the list. For example, the synergy between Necromancer's Stockpile and Gravecrawler is saucy. Gravecrawler is about as low as a card can go. Vengevine is up in price for no good reason, but this may be all that deck needs to grow the beard in Modern. Is this better than Zombie Infestation? I think it is in a lot of ways, but if the mana cost to activate it proves prohibitive, it will be too bad. This card is sick. EDH wants foils of this, and it was born to put Ichorid in the yard. There has to be a way to make this work.

In standard, it's a bit of a high cost given I haven't seen much I want in my yard on purpose. Soul of Innistrad? We'll see. I mostly like this with Gravecrawler and I eagerly await Sam Black breaking this in Legacy.