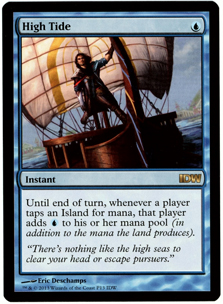 I didn't get a pink slip in my inbox this morning so I'm guessing the SCG Standard roundup I did was OK. I'm going to charge ahead and see if there is anything actionable from Legacy.

Death and Taxes wins the event. If you watched coverage, it was a pretty sweet finals. This deck isn't exactly new, but the price of one card in particular, Thalia, Guardian of Thraben is worth watching. It's down from a historic high and that seems incorrect. I feel like the foil is a $50 card waiting to happen. Death and Taxes is not the only deck playing Thalia, and I expect this to be priced according with a Legacy foil's stature.

Decks like Ross Merriam's Elf deck make me really bullish on Deathrite Shaman going forward. Modern bannings hurt it, but it gets so much play in Legacy that I think it's a good pickup if it dips at rotation. So many people are poised to get in if it shows signs of dropping that it may not on the basis of opportunism.

Bug Delver is also buoying Shaman, but it's a good home for True-Name Nemesis, a card that is going to stay high until it is reprinted, possibly as a reward foil. True, they're shipping more EDH decks, but there is a little fatigue surrounding them. No financier is excited about buying the decks to pop them and having to deal with 99 other cards. The decks are mostly ending up in the hands of EDH players, and those singles don't hit the market as efficiently. Expect this to add a modicum of stability to the price.

RUG Delver is a good deck. Not much actionable or noteworthy here. This is just a solid deck that has been good since before they printed Delver of Secrets // Insectile Aberration.

Sneak and Show is another boilerplate deck in the format. I predicted a big spike in the price of Ancient Tomb which happened, but the trend is slowly reversing. I predict if it gets too much lower, it is a great pickup because the $25 it hit is a good historical precedent for the price and the card isn't getting less popular. It should correct around $20, but if not, look at getting in.

Jared Boettcher must have thought he was going to a Vintage tournament with this deck. Young Pyromancer foils haven't moved in a year. That doesn't seem correct. I would trade for these aggressively.

Feline Longmore and her deck are at it again. That is another Top 8 for Feline, playing the most annoying deck on the planet. I think the IDW comic book High Tide is too cheap right now, but the deck is what it is. It made Candelabra of Tawnos go nuts, and a card from that set that sees as modest an adoption but the same rarity could be the next $400 card.

There's some food for thought for you. What about you? Do you pay more attention to Standard and Modern? Does the potential for huge price jumps make Legacy more exciting? Leave it in the comments.