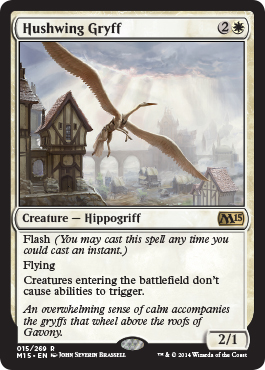 Today we got one of the few eternal playable cards from M15.

Read it over... and bask in it's awesomeness.

We got a flashable Torpor Orb with 2 power and evasion for 1 white mana more. Gotta love that power creep, nearly being the twin brother of Aven Mindcensor (the CMC, Flash ability, Flying, and power/toughness).

We can all agree that is one solid hatebear. This could really help Modern fight those darn Pod decks that keep creeping up everywhere, stops Twin decks, and is pretty solid against the U/W/x flash decks... so you get some solid hate against the format's pillar deck archetypes.

Of course, the biggest downside is that his ability is symmetrical (unlike our favorite bird wizard). This is actually a bigger deal than you might initially think. If it wasn't, he would immediately find a home in the U/W/x and possibly Pod decks.

Now he does fit very easily into the Modern Hatebears style deck that already exists. And while he makes the U/W/R control decks creatures much worse, he is so good against Pod/Twin that he might be worth it. He can easily fit into the "Junk" style decks as well, as he tends to stop nothing of theirs either.

The real question is, does he have a home in Legacy? Unfortunately, I don't think he does.

There are a few decks in Legacy that play White, every single one of them playing Stoneforge Mystic, which this turns off. And getting a recurring 4/4 vigilant lifelinker that can get bigger (by attaching to other creatures) is a very good game plan that ends games quickly. The other problem is that a lot of the decks in Legacy don't play creatures with ETB abilities. Here's a list of decks that this card is nothing but an evasive creature with 2 power against:

And here are the ones it can hurt;

So basically it's good against "Fair decks" and makes Miracles creatures bad.

But of all the decks it doesn't affect, none of them were white.

He's a house in Modern but is unlikely to find a home in Legacy.

This card does not stop creatures whose abilities say "As they enter the battlefield" (like Painter's Servant, Iona, or Phantasmal Image)