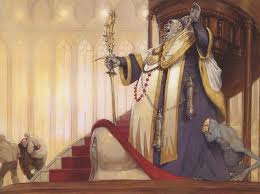 So this is a thing.

Anyone who was privileged enough to watch Jeff Hoogland pants a True-Name Nemesis player with this guy knows that it has utility in Legacy as well as Modern where it's been jammed in pod decks. If you were lucky enough to get in under $1 because you saw the writing on the wall, congrats. I'm not one of you.

So what's the ceiling on a card like this? There are a similar number of copies of Pontiff as there are cards like Horizon Canopy and Fulminator Mage so clearly a non-mythic that is non-mythic because it is from the pre-mythic era has a high ceiling if it's a 4-of, even if it's in a stupid durdle deck like Daybreak Coronet is. Pontiff is not likely to be a 4-of anytime soon, so where do we see it plateauing? More importantly, is there money to be made buying in now?

With the price approaching $4 it may very well be too late as I'd call $5 a decent ceiling for a fringe card like this one, even one so effective as this. You may still find these in bulk boxes and dollar binders in shops who don't update prices often and these are in trade binders and collections. I wouldn't buy in for retail, but I will watch this card carefully because wherever it ends up, we'll use that number to answer the question "where is the ceiling" for cards like this in the future.

With Modern applicability and Legacy crossover appeal, this is a real card, just not a card people really pay much attention to.

What cards do you see that are analagous to Pontiff? Is there a different card that will be more instructive about the ceiling for pre-mythics played as 1-ofs? Are you buying in now to see if you can't get out for more when it plateaus? Care to make a guess at its final resting price? Leave it in the comments.

7 thoughts on “The Little Pontiff That Could”