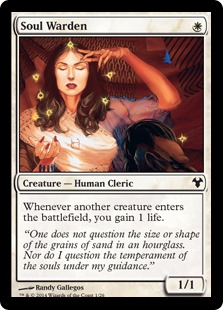 It's one of the age-old questions in Magic: If I want to build a deck to play, should I go for a cheaper option that wins less or an expensive one that wins more? It's a problem we all consider in this game when we're putting together a deck. Heck, I could maybe win a few games of Commander that I would otherwise lose if I replaced Watery Grave with Underground Sea, but personally it's not a tradeoff I'm willing to make. I'll pay the two life and save a few hundred bucks.

In Commander it's an easy choice. Where it gets more difficult is something like Modern, and the debate has come up again on Reddit.

Modern is an expensive format to break into, and if you don't have the (currently) expensive mana base your options can be limited. That leads players to building cheaper decks like Soul Sisters (the example used in the thread). Soul Sisters is a fun-ish deck that can pick up wins even if it's not truly "Tier 1." So is it a good idea?

My take on it is this: there exists a middle ground. Building the cheapest deck just so you can pay to enter Modern tournaments you can't win isn't going to get you anywhere. But there's also no need to go buy the most expensive deck on the market. For me, that middle ground is Merfolk. It's competitive even if it's not winning Grand Prixs, but I'm confident entering any tournament with it.

But the truth is, I've won local tournaments with Merfolk. I wouldn't feel the same confidence with a deck like Soul Sisters or GW Hatebears. And if you spend a bunch of money on a deck like that (or truly, even Merfolk outside of Mutavault), you're not getting any closer to truly competing in the top of the format. I would argue it's better to play Melira Pod without the best manabase than it is to have a perfect manabase in Soul Sisters.

The reason? You need to accumulate staples to set yourself up for the future of the format. Pods and a fetchland or two at a time will do that, but all the Norin the Warys in the world aren't helping you there.

I'm not here to say there is one right or wrong approach. But I do know that it depends on your goals. Do you want to play in a Modern tournament and have fun or do you want to be able to win a PTQ? One approach gets you closer to that goal than the other, and it's up to you to decide what you want to get out of it.

But that's my take. How do you feel about it?