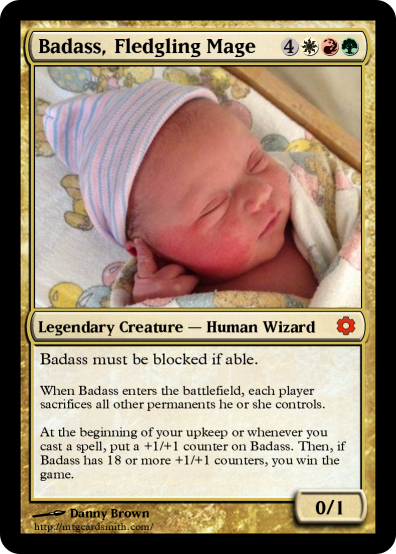 Magic celebrated its 20th anniversary last year, which means in just a couple months, the game will legally be able to drink. With legal drinking comes all kinds of other adult responsibilities, like jobs and bills and parenthood. That last one is our topic today.

Longtime Magic players are growing up and casting their own little mages and ninjas. It’s cool to see this game that many of us have loved for so long be passed down from one generation to the next. From old-school pros like Chris Pikula… 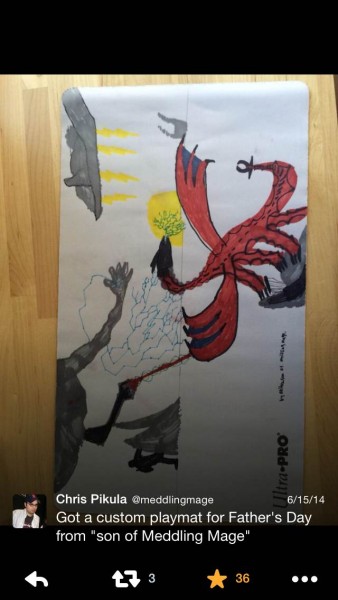 Learning Lessons: My Journey into Nyx Prerelease by Bruce Richard

To the #mtgdad hashtag on Twitter, we’re frequently seeing sweet, humorous, and fun looks at growing up as MTG players and introducing the next wave of players to the game.

I admit, my ulterior motive for bringing up this topic today is that I recently became an MTG dad myself. I’ll spare you all the Gushing, but suffice to say: it’s pretty cool. In celebration of my son’s birth, I decided to design a card, an activity I have not delved into much before. Parenthood makes you do all kinds of crazy things.

Now without further ado, consider yourself introduced to Badass (pronounced B’doss, which is what my wife and I called him in utero):

I could go through all the things I think are fun about this design, but I’d rather let you work out all the flavorful details yourself. It’s like explaining a joke: discussing each part of the top-down design here will just kind of ruin the impact. Think it through and feel free to critique my choices.

MTG moms and dads unite! I found it fun to design a card for my little boy, so I’m now encouraging you all to do the same. Tweet me your entries on Twitter at @dbro37. The contest will close three weeks following publication of this article, and I’ll announce a winner shortly thereafter. The rules are simple:

That’s it! I wish I could offer a huge prize for this contest, but I need diaper money, so I’m just putting a single copy of Birthing Pod up as bounty. It’s not much, but free stuff is free stuff! Get designing and tweet at me when your card is ready. Again, find me on Twitter at @dbro37.