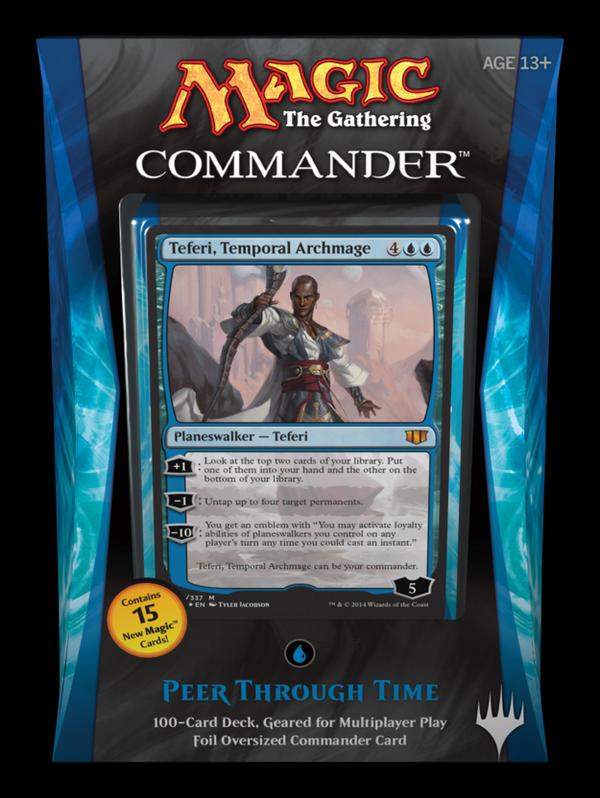 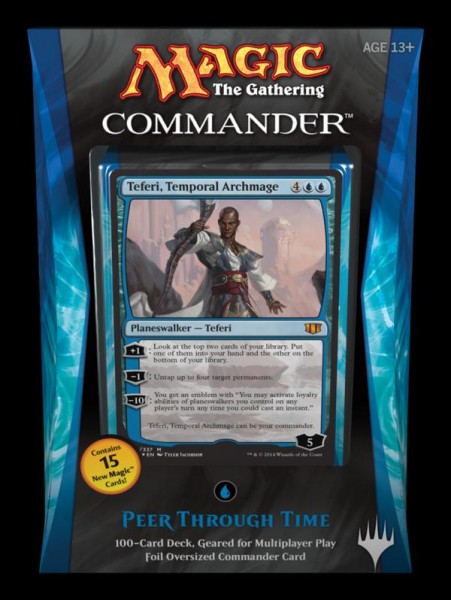 Let me zoom that in for you: 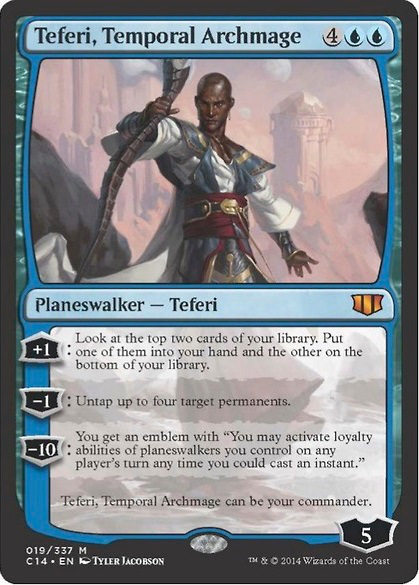 Do you see that last line? "Teferi, Temporal Archmage can be your commander." Mind: blown.

Mark Rosewater confirmed that this will be a cycle of mono-colored planeswalkers at the forefront of this year's Commander decks. So we can expect five of these. Interestingly, as I understand it, Teferi is no longer a planeswalker in the current storyline. What we're seeing here is a retroactive look back at the planeswalker Teferi once was. Will the other five planeswalkers in this cycle also be from the past? Did anyone mention Urza?

From a play perspective, planeswalkers as commanders is a huge change. One wonders if the rules committee was consulted before these were sent to print. [EDIT: It seems that, yes, the EDH overlords were privy to this move.] Wizards of the Coast is ostensibly hands-off with the format, so it would be surprising if they printed something so barrier-breaking like this without at least running it by Sheldon Menery and the rest of the team. Some local playgroups have already adopted rules allowing any planeswalker to serve as commander, so it's not like this hasn't been considered before. Don't be surprised to see more playgroups adopt this mentality, or if these planeswalker-commanders are extremely overpowered, it would be equally unsurprising to see playgroups discourage their use altogether. This move may be exactly what players want from the format, or it could be pushing the power level just a little too far. We can't really know until we see how these cards perform.

From a financial perspective, I have no idea. At least one of these decks will be a snap-buy at MSRP, but since these planeswalkers will only be available in these sets, all five could be at that level. Until more spoilers and preorders start going up, it's hard to make any kind of financial predictions at this time.

From a business perspective, it's a little shocking that R&D has taken such a bold new direction so soon. The previous iterations of Commander decks sold like crazy. I still have never seen a copy of Mind Seize in the wild (except for at $60-plus), and even the "bad" Commander decks all disappear from the shelves eventually. This product was already going to sell out, so pushing something so crazy and powerful and new like this seems mistimed. Why not wait until interest in the product line is waning to reinvigorate it with something so radical?

I'm sure WOTC has a plan, but let's hope it's not printing five new planeswalker-commanders every year. That will get out of hand very quickly. On the other hand, can you imagine the outrage in 2015 when we're back to legendary creatures as commanders? It seems like R&D has set up a damned-if-you-do-damned-if-you-don't situation, but they surely have a strategy for the format. It will be interesting to see what that is moving forward.

4 thoughts on “Commanded by Planeswalkers”