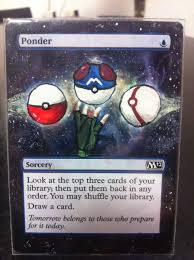 With the good vibes from the prerelease weekend slowly fading, it's time to get our weekly dose of drama in. Remember folks, FNM may seem like a totla blowoff and a good way to kill time on a Friday, but it's still a sanctioned event. Tread carefully.

So we were playing the 5th round of FNM and we were both 2-2. Whoever won our game was getting into top 8 due to draw shenanigans and such, so it was a pretty intense game. He was playing Azorius control, I was playing Naya superfriends. He was playing some Dspheres that were altered to look like pokeballs and convincingly beat me with them.
After the match ended, he turns to the person next to him and says "The girl that altered these cards used crappy paint...I can feel the paint through the sleeve." I told the judge about it, and he got disqualified.
Now he went all Jerry Springer about it, and admittedly I did feel like a little bit of an asshole. Would you guys have done the same thing?

What's your view? Is OP a tryhard and a dingleberry for involving the 5-0 in this situation? Is he a sore loser? Was he correct to involve the judge? Is a DQ too harsh for FNM? Weigh in below.

7 thoughts on “FNM is SRS BSNS”