Saturday afternoon brought us some new information via the Magic: The Gathering panel at San Diego Comic Con. Throughout the hour I was constantly refreshing Twitter in the hopes of discovering some financially relevant information to act upon. After all, I’ve identified myself as an investor in MTG first and a player second.

The good news is some of the information spoiled will certainly impact financial values. The bad news is most of the most obvious effects will be negative for prices. But that doesn’t mean there is no where to look for opportunities – there just may have to be a little more “speculation” if people hope to get into a bet on the ground floor.

First, let’s start with the most financially devastating news.

This tweet certainly grabbed my attention most quickly, and I am certain there were dozens like it:

The first four Duel Decks made by Wizards are all being reprinted! For those who regret not getting their hands on them the first time around, this could be one of the most exciting tidbits to come out of SDCC. I had purchased a Divine vs. Demonic set when it first came out because I wanted the alternative art angels in the set, but I ended up cracking the one unit I purchased, selling the Demonic half to offset the cost.

Turns out that was a poor investment decision, and I should have probably purchased ten more at MSRP while I had the chance. 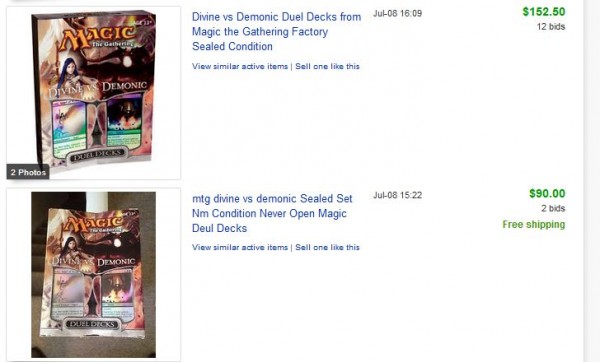 The set that will take the largest financial hit is the very first Duel Decks set made by Wizards, Elves vs. Goblins. 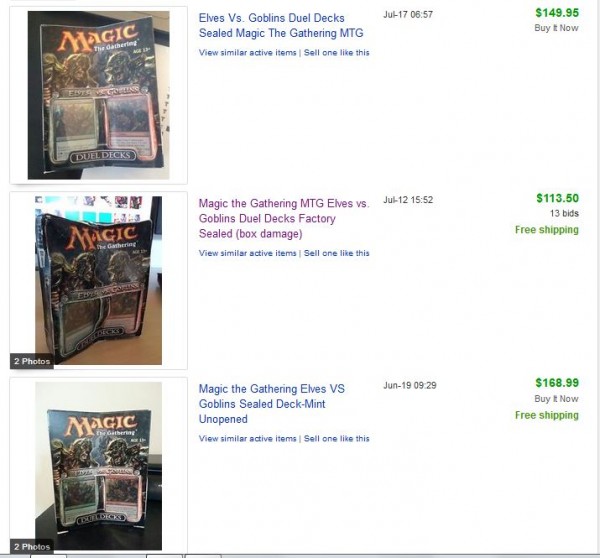 These have been expensive for years now, but their time at these elevated prices may be nearly over. Granted, the reprinted versions will have new card frames, so there may be collectors who prefer the original printings.

As a result, the original sets will maintain a value premium. But, from my experiences, reprints will almost always bring down prices on original print runs… unless they are Mythic Rares in Modern Masters (apparently).

I look forward to purchasing another Divine vs. Demonic – I will not mess up this second chance. But for those who have any positions in these first four Duel Deck products, I’d advocate selling unless you have a true appreciation for original printings. These are no longer going to appreciate in value, and the reprints will likely drive prices downward over the next year or two.

I have one set of Garruk vs. Liliana that I won in a Twitter giveaway from one of the beloved Frag Dolls. If I had no nostalgia attached, I’d sell it. But my sentimental attachment motivates me to keep this original one, even knowing the value will drop.

The next piece of information from SDCC I want to touch on is the announcement that Khans of Tarkir will be a Wedge Block, or at least a Wedge Set. This Tweet alerted me to this news and our Insider QED Tweeted a valuable response.

My thoughts exactly! While it is fairly disappointing the Heliod, God of the Sun spec will never pan out (more reason I am trying not to speculate so blindly anymore), I do believe a wedge block means some opportunity come rotation. For one, I’m officially 100% in the Theros Temples camp and 0% in the Nykthos, Shrine to Nyx camp.

Don’t get me wrong, Nykthos should appreciate in value over time due to Casual and EDH play. But, in the short term, I want all of my Standard money in Temples.

Multicolored Gods should also appreciate, but I honestly couldn’t begin to guess at which ones have the most upside. While I am confident Temples will all have their chance to be relevant throughout Standard, I know not which Multicolored Gods will also be strong come rotation.

My plan will be to monitor the metagame very closely and buy up any Gods that perform strongly throughout the first couple weeks of the new format. I won’t be buying in at the very bottom, but the downside risk is drastically reduced by making my acquisitions after seeing how the Gods perform in the new Standard. A tradeoff I’m often willing to make whenever I have uncertainty.

I could go down another level to identify more buying opportunities. Mana Confluence could be absolutely critical for mana fixing in a multi-color intensive Standard format.

There may be other gems as well. But other than these, I’m not inclined to make large bets with such little information. I’m perfectly content to wait and see how events unfold, and I’d recommend a similar approach if you are also interested in avoiding unnecessary risk.

We also saw our first spoiled cards from the fall set. First is Zurgo Helmsmasher: 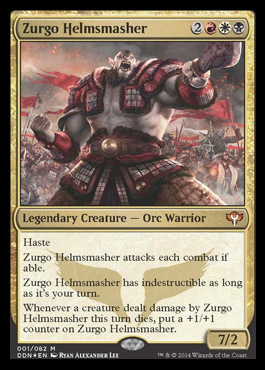 EDH players will surely rejoice at all of the new tri-color general options they’ll have to choose from. And I almost wonder if older tri-colored cards that fit these new shards could even go up in value.

Outside of this format, however, I’m not sure how exciting Zurgo truly is. A seven-powered hasty-dude who can’t be killed on your turn is pretty enticing. And if they block, they’re likely going to lose a dude, making Zurgo an 8/3 almost out of the gate.

Even though the Helmsmasher is Indestructible on your turn, he seems awfully vulnerable on your opponent’s turn. A toughness of two means he dies to virtually every removal spell ever printed… okay, besides Flare and Spark Spray.

He’s also not going to help you much in terms of blocking – this guy is 100% all-out offensive. In the right build, that may be exactly what you need. Only time will reveal if this Orc Warrior will have enough ancillary support to make him relevant in Standard.

On the other hand, how sweet would it be to Pod into this guy to completely take your opponent by surprise in Modern? I may have some testing to do…

The other spoiler came from the next set of Commander decks. A set of five mono colored Commander decks. As an aside, if Nykthos does not appear in each of these, maybe it truly does have some upside potential. But I’m not willing to make this bet.

Anyway, here’s the first spoiler we have from the new Commander sets: 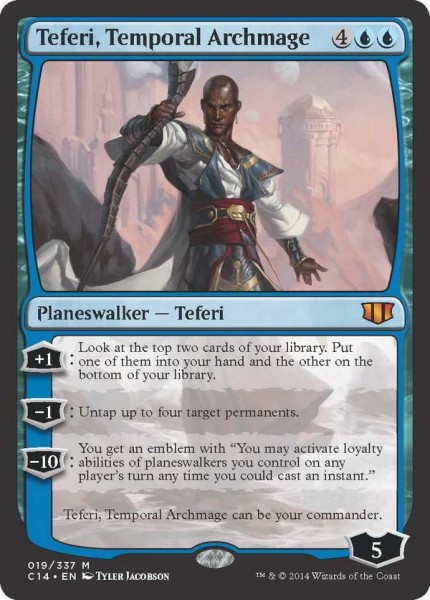 Now this is a Planeswalker! At last we have Planeswalkers who can also be EDH Generals! This progression feels like a natural one, and I am excited to see Wizards break the mold and strive to make EDH an even more awesome format, if that is even possible.

Teferi himself seems quite powerful, and I may be easily convinced to swap my current EDH General, the less new and less flashy Teferi, Mage of Zhalfir, with this one. At six mana he may never be relevant in tournament play, but if all the mono colored generals are Planeswalkers like Teferi, I can see these new sets becoming very popular.

It is difficult to guess what other cards may be reprinted in these new sets. Could all the Tempest Medallions be reprinted? Will these decks have a Devotion theme? Time will tell, but I can all but guarantee two things from these sets: 1) Fetch Lands won’t be reprinted in them and 2) there will be relevant reprints.

The last bit of information I want to touch on this week are the spoiled cards from the From the Vault: Annihilation set. We received confirmation that the following cards would be making their appearance in this set: Wrath of God, Rolling Earthquake, Living Death, Armageddon, and Cataclysm. It is fairly obvious already what card will be impacted most from being reprinted.

I would say this original printing should maintain decent value because that is typically the way of original printings. But the fact that the new version will be black-bordered and foil just may be cool enough to impact Rolling Earthquake’s value drastically.

I don’t believe this announced reprint was a surprise, as some of this information had previously leaked. But having that confirmation is certainly going to be a nail in the coffin for this Sorcery. You may want to think about buy listing your copies if you aren’t particularly attached to the original artwork. 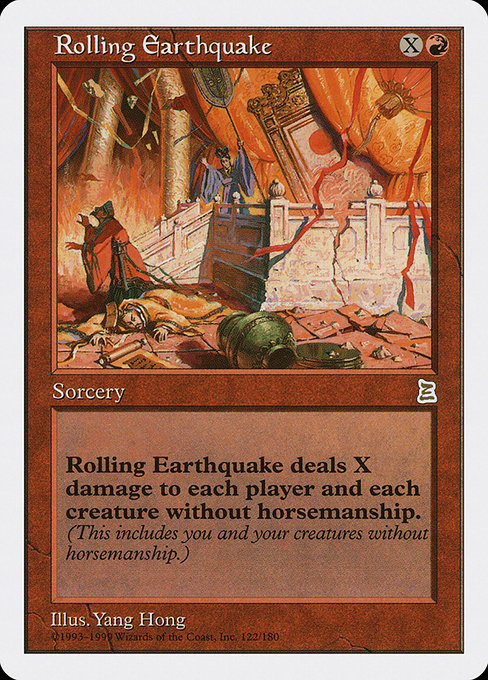 Tip of the Iceburg

So far we’ve seen one card from Khans of Tarkir, one card from the newest Commander sets, and a few cards from the latest From the Vault series. There will be a TON of new spoilers in the coming months. Wizards of the Coast is cranking out new products more rapidly than ever before, giving casual and competitive players a wide array of cards to drool over.

For now, all we can do is speculate, and this is not my forte. I will continue to focus on Temples and advocate a cautious approach heading into the fall. Between risk of reprints and hundreds of unknown cards, predicting what will come is almost like predicting the trajectory of the stock market itself. You may get lucky and guess correctly, but it’s much safer to look at fundamentals and make your acquisitions based on these. In times of uncertainty, the fundamentally strong cards will have the highest likelihood of providing a return on your investment.

As we are given more information, the upside potential on the right buys may shrink, but the likelihood of success will rise. Despite the smaller returns, those are the odds I like to bet on, so I’ll be watching very closely as events unfold in the coming months!

27 thoughts on “Insider: Reactions to the SDCC Announcements”