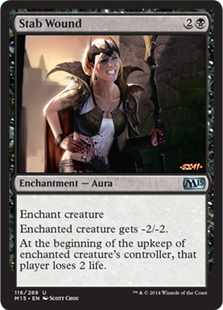 Magic 2015 is now available on MTGO. Let's give ourselves the best chance to win by identifying the pertinent cards in each color. This time, we’ll be taking a quick look at the common and uncommon removal available in black. Not only is it helpful to know what removal spells are available when drafting a particular color, but it helps you know what to play around when facing off against opposing decks. 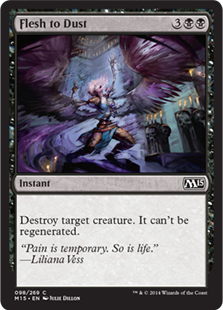 As Cardboard Crack has already covered, we've come a long way from Doom Blade at common. It just goes to show how important spot removal is that Flesh to Dust is still playable, and perhaps even good depending how fast the format is. It's definitely the most flexible black removal spell at common in the set, so probably deserves the distinction as best black common removal, despite being no Murder. At least it's an instant, right?

Covenant of Blood has you overpaying by one for a Drain Life for four, but with the upside that you can cast it several turns early if you curve out appropriately. At that mana cost, it's probably not going to be an all-star. A good Limited deck probably won't have more than one, but playing one is probably reasonable.

Crippling Blight is not insane, but it is flexible in that it's good in both in aggro (to get big blockers out of the way) and against aggro (killing x/1 creatures). There is a pretty large number of x/1 creatures in this format, which will make it better than usual. Festergloom will also be better than normal, occasionally blowing out aggro decks. That said, there will be some matchups where it is completely unplayable.

Necrobite is not strictly removal, but it's worth mentioning in that it usually serves that way. Brian Wong and Marshall Sutcliffe of Limited Resources have been arguing about this one since it was reprinted in Born of the Gods. On one hand, it requires so much to go right. On the other hand, you can set up some crazy blowouts when there are multiple blockers involved. Be smart about putting this in your deck and playing it at the right moment, and it may be okay to play a copy.

Stab Wound is back, to the woe of  Limited enthusiasts everywhere. It's a feel-bad to lose to this card, but at least they've bumped it up to uncommon this time. This is a first-pickable removal spell that is extremely flexible and can provide reach in the final turns of the game. Play accordingly.

Is Ulcerate the black Lightning Bolt? Probably not, but it seems pretty good. Killing a medium-sized creature for one mana is a great deal, and in the creature removal department, -3/-3 is better than three damage the vast majority of the time. The downside, of course, is that you can't aim it at your opponent's face, and you don't want to discount how much losing three life matters for your deck, either. A deck doesn't want too many of these, but the first is likely to be a fairly high pick.

Finally, we have Nightfire Giant, which isn't strictly a removal spell, but in a deck with Mountains, this can clean up some utility creatures at the cost of five mana per shot. This is going to be one of the better uncommons for decks that can support it, but it's unlikely you'll get caught by surprise when someone plays it and activates it on the same turn.

Black's removal doesn't seem as deep or as powerful as red's, but it's what we've got. Here's a quick summary of the removal in the format: