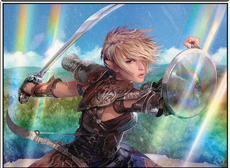 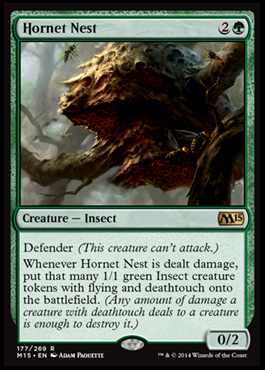 Although flavor-laden, I don't know if the fact that the number of hornets you get scales with damage justifies this being printed at rare. Roc Egg was a fine card, not too powerful, but a very solid draft pick mid-pack. Is this so much better than Roc Egg that it need appear a third as often in drafts? 1/1 flying, deathtouch wasps are very good. I hope Hornet Nest is not the only card that produces these wasps, because a playable card that makes them would give financial upside to the 1/1 flying, deathtouch wasp tokens. As it is, the tokens will be unique and hard to find, but with no impetus to get them outside of a limited-only bulk rare, upside will be limited. 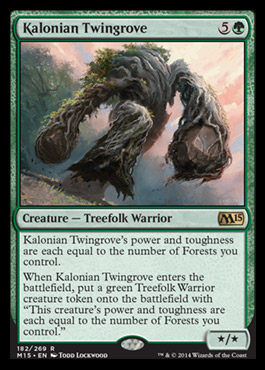 The twinglove token was spoiled by Adam Styborski a full 24 hours before the Twinglove. "Double Dungrove" has a real drawback in that he lacks Dungrove Elder's heproof but kept his lack of trample. However, mono-green devotion seems pretty solid and with the new Nissa there is a lot to work with.

The token I mentioned has a lot of upside if this card sees play. Having printed 5 tokens and about to print my 6th, I know that any jackass with a paypal acount can commission tokens and yet the ones inserted into packs by Wizards continue to command real price tags. I wouldn't be surprised to see Twinglove tokens laying around on tables, discarded, at the prerelease. I also wouldn't be surprised to see the token worth money if Twinglove is as well. $5 tokens are a real, historical thing.

This card looks like there are a lot of circumstances under which it could see play, and casual players will get a kick out of it. I'd keep my eye on this dude. 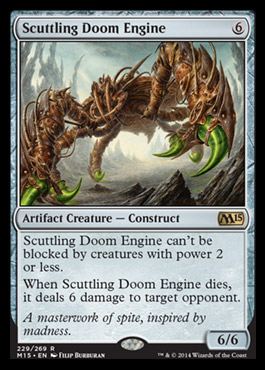 Apart from a ridiculous name, this card seems very solid. I wrote that there wasn't much of an impetus to use Chief Engineer to ramp things out, but this may be a reason to try those kinds of shenanigans. Green should have an easy time ramping to this as well. As a curve-topper this guy is no Wurmcoil Engine but he is very good for rare and I think he could see play. He certainly seems powerful enough to try. EDH obviously will try this as well. Looping him with sac outlets in a deck like Sharuum the Hegemon that can easily bring him back is nutty. 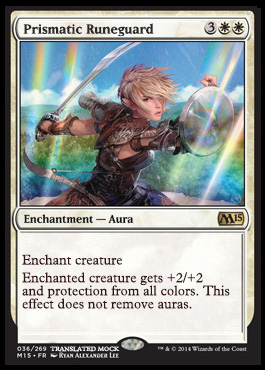 Look at the price of Spirit Mantle. This card is absolutely nucking futs in a Bruna, Light of Alabaster deck, and its mana cost is irrelevant there because you're most likely not paying it. This is nuts in Standard in the right deck although auras decks are losing too many card to continue on after M14 and RTR rotate out. So many EDH decks want this and I think Spirit Mantle demonstrates that even being printed at uncommon and being included in multiple specialty sets can't keep a popular aura down if it's the right color. White is the right color, by the way. Foils of this will likely be expensive due to EDH and I think if this tanks in value initially, you go deep. This seems durdly to standard players, which is good because I like to trade EDH gas off of them anyway. It remains to be seen whether 5 mana is going to be too much, but for an aura that says "win the damn game" when applied to Uril the Miststalker, 5 mana is cheap. Craig Wescoe is already working on a way to break this, I bet. No one liked Angelic Destiny at first, either. This isn't quite as powerful, but it isn't meant to work solely on its own and that is the important thing to remember.

If Standard ignores this card, I could see it tanking initially. I'm going to watch the price very closely. I'm all-in at $1-$1.50