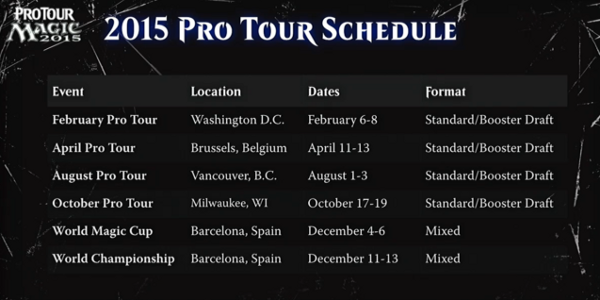 Two things happened, and they happened in a specific order.

First, Wizards announced that all future PT events will be Standard.

Then, people started whining and complaining. I made the mistake of going into the MTGSalvation forums doing research for this piece and I wish I could ungo there. The phrase "Wizards is going to kill Magic" was used unironically so many times I considered trying to find every instance of this phrase all the way back to its first use in 1993 when they changed the casting cost of Orcish Oriflamme.

So, Magic: the Gathering is dead forever. Because, you know, the guys on the MTG Salvation forums all play on the Pro Tour, and they were really looking forward to playing Modern and now they won't get to.

Today, this was posted.

I guess Magic would have died if they hadn't made this change, huh?

What do we think? Is this a good change? Did they save Magic from certain oblivion? Is Modern on the PT even a big deal? Is this just going to encourage the whiners to whine louder? Sound off below.

11 thoughts on “How We React to Good News”