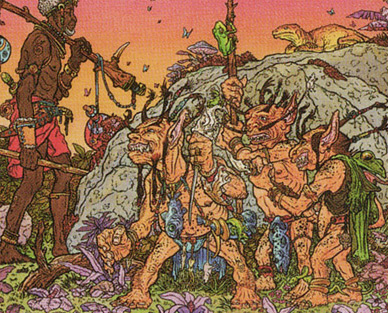 More specifically, sometimes the art can influence the card more than the card designers intended.

Take, for example, one of the most famous stories about Magic art.

In 1993, budding artist Mark Poole was commissioned to do several pieces for Magic the Gathering's trading card game. The set would later be called "Alpha". Most commissions went fine, but the art submitted for a land called Tropical Island wasn't going to work as submitted.

While the Tropical Island is technically there, the birds used to denote the tropical nature of the island were featured too prominently.

Wotc was stuck. They didn't like the painting because it seemed to feature the birds but they had to pay Poole for the art either way. Not wanting to waste it, they cobbled together a quick card that would feature the bird art and it accidentally became one of the most iconic green creatures to this day, despite them constantly saying "we don't want green's iconic creature to be a 0 power flier"

So what are some other examples of the art influencing the card?

Sunweb was supposed to be unable to block white creatures. Too bad the art came back with Sunweb blocking the absolute crap out of a white creature. Better change the card text...and what do you know, the card's actually more fair, now.

Geoff Darrow's art for Goblin Scouts is way too good to throw away. Sorry, Dwarves who were supposed to be generated, making a card that made more sense.

What's your favorite "the art influenced the card" story?